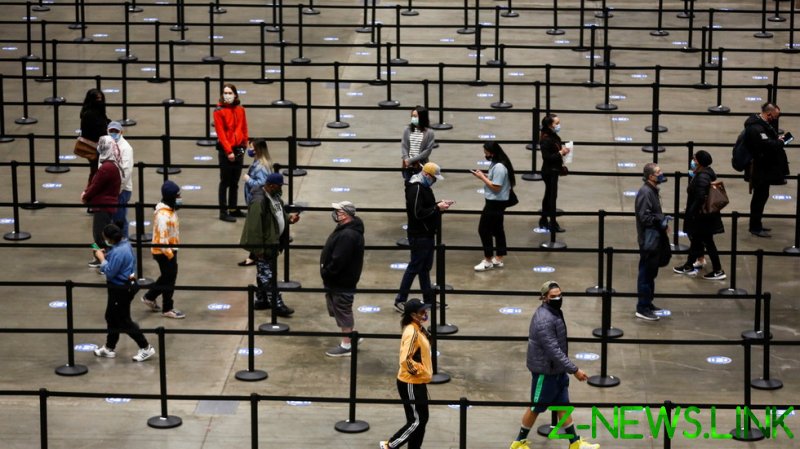 The order, which the Republican governor signed on Friday, notes that Covid-19 vaccines are not required by law, and individual inoculation records are private health information. Requiring vaccine passports to access goods, services or activities would infringe individual freedom and invade privacy, DeSantis added in the order.

“Requiring so-called Covid-19 vaccine passports for taking part in everyday life – such as attending a sporting event, patronizing a restaurant or going to a movie theater – would create two classes of citizens based on vaccination,” DeSantis wrote. He said the order protects “the fundamental rights and privacies of Floridians and the free flow of commerce.”

No business or government entity is allowed under the order to require people in Florida to provide documentation of their vaccination status. State agencies will enforce the order, including compliance as a condition of state licensing and other authorization needed to do business, and companies that violate the ban won’t be eligible for grants or state contracts.

“The Legislature is working on making permanent these projections for Floridians, and I look forward to signing them into law,” DeSantis said.

The order comes amid a global debate over the ethics of forcing people to take vaccines to be able to live as full-fledged citizens and restore freedoms that arguably weren’t legally infringed in the first place. For instance, South Korea’s prime minister said on Thursday that only those who get Covid-19 jabs will be allowed to return to their “daily lives.”

The Biden administration so far has sidestepped the issue, coming down on the side of a two-tiered society but seeking to achieve it through the private sector – without government mandates. DeSantis is short-circuiting that effort, at least in one major state, and conservatives such as US Representative Marjorie Taylor Greene (R-Georgia) have called on other Republican-led states to follow suit.

Conservative Twitter users cheered DeSantis for following through on his pledge earlier this week to forbid local governments and businesses from requiring proof of vaccination. Author Mike Cernovich reacted with one word – “2024!” – alluding to the next presidential election and the national popularity that DeSantis will gain by defending individual freedom on the vaccine issue.

“Yeah, DeSantis for president 2024,” real estate investor Rich Vaccaro tweeted. Another commenter said, “Yes, DeSantis 2024. Make America Florida.” Scientist Cronan McNamara was among those who said they may vote with their feet. “That’s it, I’m moving to Florida,” he said.

But leftists suggested that DeSantis is murdering people with his policies. “Kneecapping mask and vaccine rules is tantamount to negligent homicide,” one commenter said. Musician Adam Lasnik said he won’t visit the “beautiful but stupidly dangerous state of Florida, at least until callous, craven politicians like DeSantis are ousted.”

DeSantis previously angered Democrats and won favor with conservatives by making Florida one of the most libertarian states in terms of Covid-19 restrictions – all while keeping case and death rates lower than such pro-lockdown states as New York and New Jersey. For instance, DeSantis last September banned Florida’s local governments from enforcing mask mandates.

The Florida governor’s handling of the pandemic made him one of the top contenders for the GOP presidential nomination in 2024. Republican pollster Tony Fabrizio reportedly found in March that DeSantis has 17% support among GOP primary voters if former President Donald Trump isn’t in the race. Only former Vice President Mike Pence polled higher, at 19%. The poll showed that 51% of respondents favored Trump, and DeSantis would be No. 3 at 7% in a race that includes the ex-president.