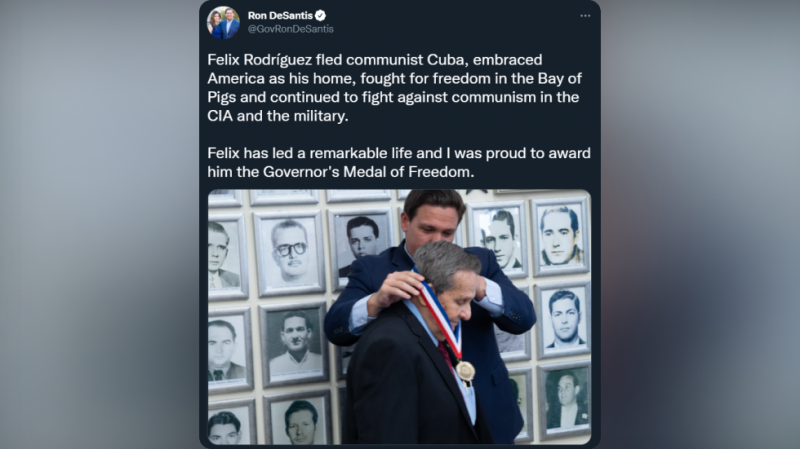 DeSantis awarded the medal to Rodriguez last Thursday but published a photo of the ceremony on social media Monday, praising his violent history of roles with the US Central Intelligence Agency.

“Felix Rodríguez fled communist Cuba, embraced America as his home, fought for freedom in the Bay of Pigs and continued to fight against communism in the CIA and the military,” DeSantis said, adding that he “was proud to award him the Governor’s Medal of Freedom.”

Rodriguez – whose uncle was a minister in US-backed Cuban dictator Fulgencio Batista’s murderous regime – worked with the CIA in the Bay of Pigs Invasion, a failed attempt to invade Cuba following the 1959 revolution. He was also hired by the CIA to help capture Cuban revolutionary Che Guevara in Bolivia in 1967. Rodriguez was photographed standing next to Guevara before he was executed.

Though Rodriguez claimed to have been against the execution of Guevara, as he wanted him to be interrogated, he told the colonel in charge, “I give my word as a man that I will bring you Che Guevara’s body.”

Guevara was then shot to death by Bolivian Army Officer Mario Terán.

Rodriguez was also involved with the Reagan White House during the Iran-Contra scandal, when it was discovered that President Ronald Reagan’s administration was facilitating the illegal sale of weapons to Iran to fund right-wing, anti-communist rebel groups in Nicaragua.

Additionally, Rodriguez has been accused of playing a role in the murder of DEA agent Kiki Camarena – who was allegedly killed to cover up the CIA’s connection to cartel drug smuggling, again to fund anti-communist contras in Central and South America. Rodriguez denied being involved in the murder or being present in Mexico at the time. The CIA has also rejected allegations of its involvement.

Though DeSantis’ decision to award Rodriguez with the Medal of Freedom was praised by some, including former US diplomat Alberto Miguel Fernandez, who called Rodriguez a “hero and patriot,” others criticized the decision, noting Rodriguez’s sketchy history.

One American referred to Rodriguez as a “CIA butcher,” while another expressed concern over the allegations of Rodriguez’s involvement in Camarena’s murder.

“So, you’re parading Felix around to get the Latino vote, while at the same time you rally against other Latinos from ‘fleeing’ horrific conditions in their countries. Oh, the hypocrisy Ron. Shame on you,” tweeted another person in reference to DeSantis’ attempt to stop illegal immigrants from settling in Florida.

In July, a poll showed DeSantis to be the most popular Republican to potentially run for president in 2024 if former President Donald Trump is not in the race – ahead of politicians like Texas Senator Ted Cruz, Utah Senator Mitt Romney, former UN Ambassador Nikki Haley, and former Secretary of State Mike Pompeo.

This month, however, polls showed DeSantis’ support in Florida was dropping as the state experienced a surge of Covid-19 cases.

Florida has some of the highest number of Covid-19 cases and deaths per capita in the United States.