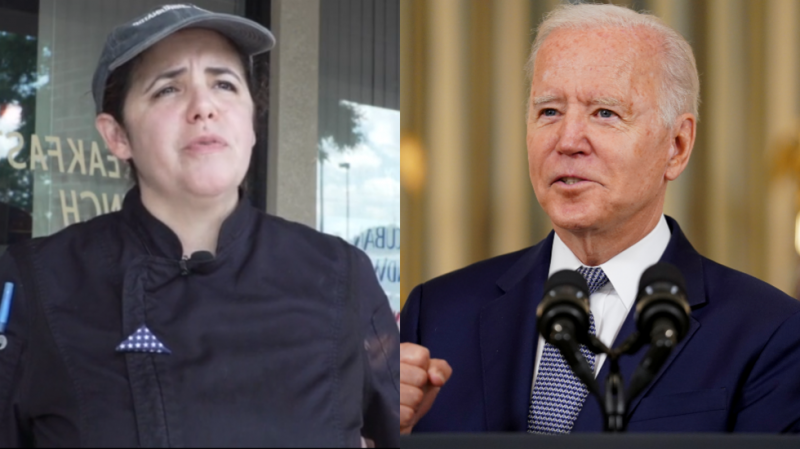 Following the recent death of 13 US service members in Afghanistan in a suicide bombing attack that killed almost 200 people, DeBary Diner owner Angie Ugarte placed a sign outside her Florida establishment reading “If you voted for and continue to support and stand behind the worthless, inept and corrupt administration currently inhabiting the White House…please take your business elsewhere.”

Business boomed, and customers who shared Ugarte’s sentiment showed up in droves to support her. Such was the demand that the restaurant was forced to close last week when it ran out of food.

Ugarte claims she’s also had other business owners reach out to her wanting to copy her partisan admissions policy.

“At this point I’m hearing a lot of people calling me asking for permission to put that same sign on their business doors,” she told RT on Sunday. “I think that’s freaking great, because more people need to stand up and more people need to make this president be accountable.”

Ugarte is not the first restaurant owner to boot patrons out over their politics. Back in 2018, a prominent Virginia eatery famously kicked out Sarah Huckabee Sanders, who was former President Donald Trump’s press secretary at the time. Trump’s son Eric reported being spat on by a waitress in a Chicago cocktail lounge a year later, amid countless similar reports from Trump’s supporters.

But Ugarte doesn’t see her sign as contributing to political ‘cancel culture,’ and insists she would have done the same had Trump made the same decisions.

“He should be the Commander in Chief and not hide behind the teleprompter and not wait for someone to instruct him on what to do, because he is the president of the free world.”

As Ugarte spoke to RT, customers continued to arrive at the restaurant, with many saying that they had traveled from elsewhere in the state just to give her their support. Many felt that Biden’s withdrawal from Afghanistan was a “horrible job,” and openly questioned the president’s “intellectual” and “mental” capability.

“You just have to watch his videos,” one customer said of Biden. “He can’t take questions and even when he answers them he can’t coherently do so. It’s very unfortunate.”

Not everyone has been as supportive. Ugarte said that she has received death threats and bomb threats, but is grateful for the continued support, especially from the local military community.