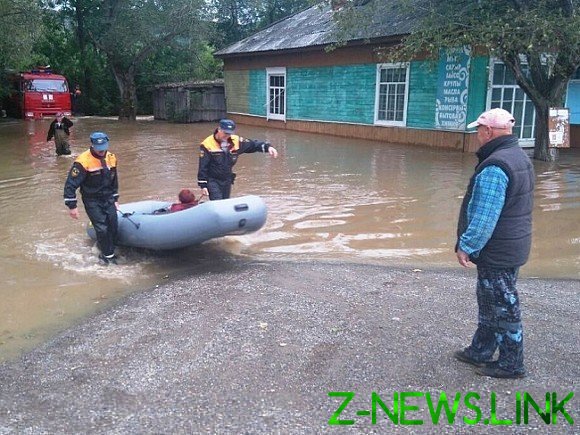 Residents of the Irkutsk region did not really warned about the impending disaster and had to be evacuated when the water level started to rise.

More than ten people died in the floods in the Irkutsk region, about a dozen people are still missing. According to the health Ministry, the number of hospitalized reached 112 people, the official number of victims has exceeded 500.

Flooded dozens of villages in five districts — Tulun, Chunskiy, Nizhneudinsk, Taishet, Zima. In Tulun washed away by the current floods houses nailed to the bridge of the Federal highway “Siberia”.

Local residents say that the authorities, as always, was “sleeping” for emergency, not really warned residents, and when the flood began — are unable to provide emergency assistance to the victims. Experts point out that such emergencies will only become more frequent and, therefore, such stories will be repeated again and again.

“Help people in a timely manner is not received. Only on the second day after the beginning of the disaster when people were drowning and called for help, was declared emergency mode. Additional launched boats and helicopters to remove people from the roofs of houses, after the day they “sailed”. In fact, the real help began to show only after the arrival of Vladimir Putin, on the fourth day after the beginning of the disaster, and on 30 June was across the street helping people. That and the lack of professionalism, and disregard for people. How could two days not to notice that people are drowning and ask for help?” — said “Rosbaltu” in Irkutsk social activist, former Deputy of the city Duma of Irkutsk Olga zhakova.

Volunteer Zakhar Sarapulov said that today contributions raises questions. Or rather, the lack thereof. “Our group of volunteers works in towns upstream of the river from the city of Tulun, to the village of Arshan. Saw emergency workers only once. Maybe they are on other sites, but our site didn’t see them. Work there only volunteers and employees of the village administration. Remote villages now cut off the river from the world, and the roads to them are not, and people in need of drinking food products, hygiene items, they are not as prepared for food. Our volunteers wrote a post in social networks, gathered more than 200 thousand rubles, that these funds we purchased humanitarian aid and went to the affected areas. Gathered a large catamaran with a lifting capacity of 8 tons. On it and moving products, gas stoves, cylinders and so on,” — said Zakhar Sarapulov.

Civic activist confirmed that local residents remained on the ground, when the water level in the river started to rise. Specialists in every way “calmed” the people, promising that a great disaster will not. “Locals accuse the MOE. According to them, warned them, that can podtopit only the first floor of Gamow, and therefore do not need to evacuate. People moved their belongings to the second floor. When and second floors are flooded, then had to evacuate without their belongings. But now the region has already appeared marauders, who swam to the abandoned houses and Rob them,” said Zakhar Sarapulov.

See also:  The truce is over in Syria again began shelling

Among residents of the area a proliferation of different versions, which have risen the water level in the rivers. Someone suggests that this plant has increased water discharge in the Hangar; someone says that the mountain blew up glaciers for the same purpose of raising water level and increasing waste-to-energy power plants. Olga zhakova sure that these rumors just gone from finding real causes.

“The level of Irkutsk hydroelectric power station is not raised. This is evidenced by the trees and the land behind the dam that are untouched. Besides, the river that overflowed into the Hangar, and not Vice versa. They say that blew up the glaciers to increase the volume of water in the Bratsk hydroelectric power station — supposedly for the construction of the Tayshet aluminium factory did not have enough capacity. But glaciers now no one blows in order to cause melting, there are other ways, cheaper funds. And that’s just them and had to apply in April to the melting of glaciers have passed evenly. Village elders had already said that this year in the region to come to big water and all the flood — Sayan is a lot of snow. But the specialists of Roshydromet did not predict such a situation,” said zhakova.

The social worker did not rule out that the rumors about the explosions in glaciers provoked by the actions of the MOE in may in the North of the Irkutsk region: then, indeed, to break the ice jams on the rivers, they blew up. But Olga zhakova believes that we ought to pay attention to other aspects, for example, on the condition of the dam in Sochi. A few years ago it repaired, and the local media tried to convince readers that the dam is now “a hundred years from now will” protect residents from flooding. It is not protected. But will look for the culprits of a waste of money in the budget if the dam is repaired “not ordinary people”?

“Contractor performing the repair of levees of the city of Tulun for 52 million rubles from the budget from 2007 to 2009, CJSC “Shelekhovskaya specialized enterprise of repair of buildings and structures”. This organization belonged to the father of the current Chairman of the government of the Irkutsk region Ruslan Bolotov Nikolai Bolotov,” said Olga zhakova.

Ecologist Evgeny Vitishko also said that the cause of the scale of the disaster could be an unsatisfactory condition of hydraulic structures. According to the ecologist, these are the underlying causes and the current disaster in the Irkutsk region, and severe flooding in the black sea last year, and resonant flooding in the Kuban Krymsk in 2012, etc.

“The causes of flooding can be many, but the main one will be the state of hydraulic structures, dams built in the Soviet era. Now they are not supported in a proper manner, they often just don’t pay attention,” — said Evgeny Vitishko.

The ecologist has noticed that actions of the authorities and the Irkutsk region, and Krasnodar region are similar, despite the distance between regions. “Analyzing the actions of the government of the Irkutsk region, regulatory documents and legislative initiatives, their words in the media, the actions of the units of the Ministry of emergencies, I can say that they are the same as after the flood in the Krasnodar region in October last year. Amounts allocated from budgets, are almost identical with a difference of 20 million in Both the Governor also promised that no one will be left without assistance, but in fact and in the Irkutsk region the same place was drowning in 2006 and in the Tuapse district in 1991, 2010, 2012, 2018, And every time they are going to do everything and spend a lot of money to the flood, there was “a hundred years”. And every time there are more important things to do and the money goes in the unknown direction”, — said Evgeny Vitishko.

In “Greenpeace Russia” believe that climate change will increase the number of emergency situations. “The frequency of floods increases, is confirmed, in particular, reports Roshydromet. Will not evaluate neither the government nor MOE, but I think that they are not very ready for such a development. In recent years, we constantly see problems. In addition to flooding, this is the same forest fires: although it is known that their number will increase to cope with them adequately is not possible. This is largely due to even lack of adequate forces and poor operational account,” said Director of the Russian branch of Greenpeace Ivan Blokov.

Preventing large-scale natural disasters requires programs, the work of scientists, adequate funding. But at the Federal level we have nothing, and the regional officials “live one day” and can’t or don’t want to quickly cope with the consequences of the elements. They have other concerns.

The climate of the country, is really disgusting. And it’s not about the weather…