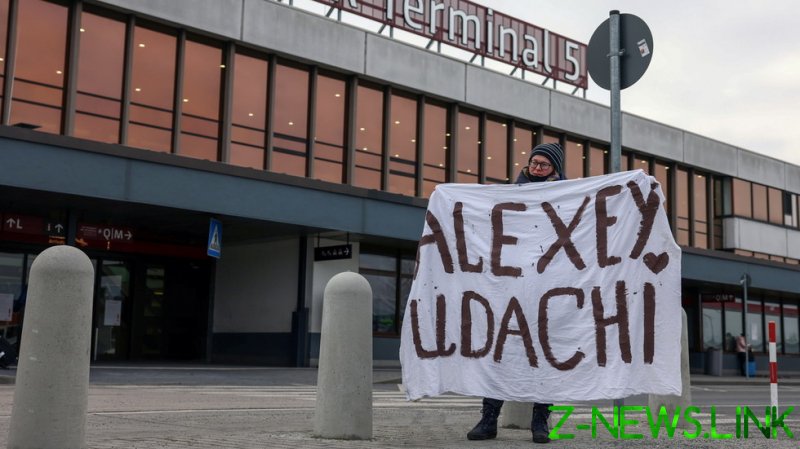 The flight carrying the anti-corruption activist and Moscow protest leader became the most tracked plane on the Flight Radar service on Sunday. “I expect beautiful weather in Moscow, at minus 23°C, and a pleasant feeling that I have reached my hometown,” Navalny told reporters on board the plane.

Upon arrival at the capital’s Vnukovo airport, he may be arrested for breaching the terms of a probation order from a criminal case he says was politically motivated. The opposition figure has blamed President Vladimir Putin for his alleged poisoning. The Kremlin has denied this assertion, with spokesman Dmitry Peskov accusing Navalny of having a ‘Messiah’ complex. Both Peskov and Putin have pointed the finger at the Moscow protest leader, saying he has been cooperating with American intelligence services. Navalny has threatened to sue Peskov in response.

The activist was given a suspended sentence in a 2014 embezzlement case, which he technically violated when he left the country in August last year, a decision made on his behalf by his family. The Russian prison service has said it has no other option but to take him into custody once he lands on Russian soil. Large crowds of supporters and journalists expecting Navalny’s arrival have convened at the airport.

Navalny was airlifted to Germany last summer for treatment after he fell ill due to what he believes was an assassination attempt by agents of the Russian Federal Security Service (FSB). The Russian authorities have flatly denied the accusations, pointing out that all requests for the activist’s medical data have gone unanswered by Berlin, as have offers to investigate the incident together.

Navalny announced his return on Twitter last Wednesday. A day earlier, Russia’s Federal Penitentiary Service demanded to replace his suspended sentence with a real one in the Yves Rocher case, adding that it was obliged to detain the opposition figure when he arrives in Russia. In 2014, he was convicted of embezzling 26.8 million rubles ($364,000) from the French company, and 4.5 million rubles ($61,000) from another firm. His brother Oleg was jailed, in a verdict described as “arbitrary and manifestly unreasonable” by the European Court of Human Rights.

On his Instagram page on Sunday afternoon, Navalny posted a video from the plane. In it, his wife Yulia quotes a phrase from the famous Russian film ‘Brother 2’. “Boy, bring us some vodka! We’re going home,” she says.

The Navalnys did not check in for the flight themselves; instead, their documents were brought to the check-in counter by employees of the German Federal Police. In addition, they were taken directly to the plane.

Vnukovo has introduced a restricted entry system in order to deter supporters of the opposition figure from gathering at the airport. The terminal can only be accessed by presenting a ticket, valid for travel on Sunday, and the arrival area has been fenced off.