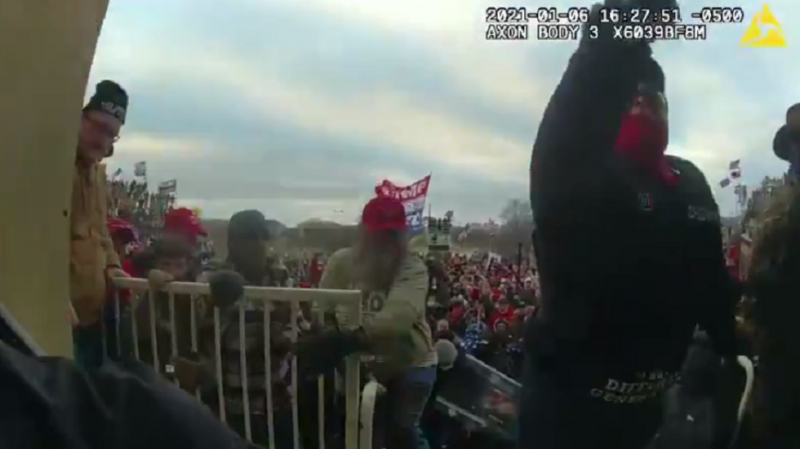 Ronald Colton McAbee of Tennessee was arrested in August and slapped with eight federal charges, including assault on a police officer, stemming from his participation in the pro-Trump riot on Capitol Hill in January. Though a Tennessee court ordered him released until his eventual trial, federal prosecutors fought in a Washington court this week to keep him behind bars.

In previously-released body camera footage shown to the court again on Wedensday, McAbee – who was wearing a ‘Sheriff’ patch – could be seen pulling a Washington DC Metropolitan Police officer to the ground. A fellow rioter helped pull the cop down, and when another officer came to his colleague’s rescue, McAbee swung for the officer with what prosecutors said were metal-knuckled gloves, and returned to pinning the first officer to the ground.

Rioters can be heard in the videos calling the officers “scum” and “f**king traitors.”

“These videos are very, very disturbing,” District Judge Emmet G. Sullivan said in McAbee’s detention hearing on Wednesday, according to CourthouseNews. “This was not a momentary lapse in judgement,” prosecutors argued. “The defendant dressed in a manner that indicates that he anticipated violence at the Capitol.”

“If released, the defendant would have even more opportunities to unleash violence against those he views as harmful to the country,” they wrote, arguing for his continued detention.

McAbee’s defense attorney, Isaiah Gant, argued that the former deputy was of good character, was not affiliated with any “dangerous group,” pushed back at officers in defense, and should therefore be released from jail and confined to his home.

Sullivan will rule on McAbee’s release within the next two weeks.

McAbee is one of more than 600 people arrested so far in relation to the Capitol riot. Around a quarter of these rioters are currently being held in jail, and their offenses range from conspiracy and assault to simple trespassing. The riot briefly interrupted the certification of Joe Biden’s electoral victory by Congress, and lawmakers reconvened that same evening to make Biden’s win official. The events of the day have nevertheless been termed an “insurrection” and “domestic terrorism” by Democrats, liberal pundits, and intelligence agencies.

While the videos seen by the court on Wednesday show a violent crowd outside the Capitol, prosecutors lost a court battle one day earlier to keep surveillance footage from inside the building under wraps. The footage showed a crowd of protesters milling around inside the Capitol in a relaxed manner, and its release triggered conservative outrage. “Hell they weren’t even trespassers, they were a tour group,” pundit John Cardillo declared.