Home / WORLD / F**k Joe Biden? Looks like US voters may do just that come next year’s midterms

F**k Joe Biden? Looks like US voters may do just that come next year’s midterms 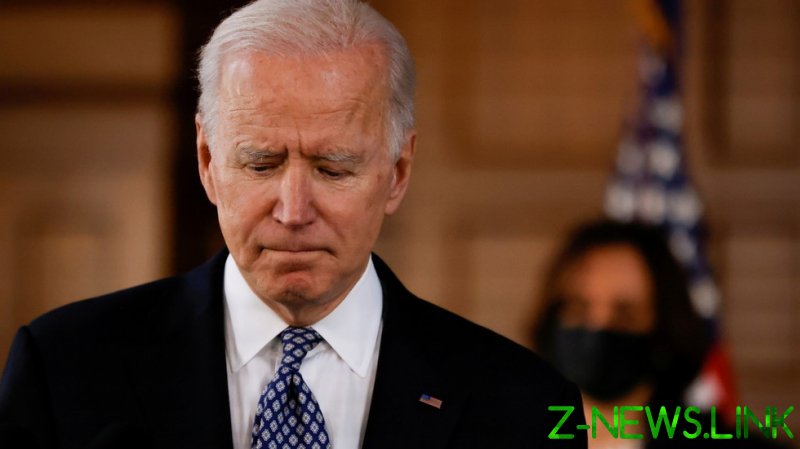 Just below the high-fructose, Cheez Whiz surface of American society, there are warning signs that a mighty giant – a sluggish, overweight giant, but a giant nonetheless – is struggling to awaken from a media-induced slumber. And the rumblings are registering in some unexpected places.

Since the days of the Roman Empire, rulers have appreciated the need for bread and circuses as a means for keeping the hearts and minds of their subjects distracted, with gladiatorial matches mixed up with a generous amount of blood and beverage. And considering that there is no bigger circus in US society than American football, the Democrats may have some cause for concern.

College football fans have begun a new tradition of chanting not only obscenities at the opposing team, but at the sitting president of the United States. The chant “F**k Joe Biden” is echoing out from packed stadiums across the land, which probably suggests to the Democratic Party that, for its sake, the removal of anti-Covid lockdowns may have happened a bit too prematurely.

Meanwhile, anti-Joe slogans have also appeared on crude homemade signs that dot the roadside of the president’s passing motorcade. The frequency and tone of these messages appears to have bruised Dear Leader’s ego to such a degree that he felt the need to speak about it during a meeting with 9/11 first responders.

“I’m thinking what, what would the people who died, what would they be thinking? Would they think this makes sense for us to be doing this kind of thing where you ride down the street and someone has a sign saying ‘F- so-and-so?’” he asked firefighters in Shanksville, Pennsylvania.

Instead of fretting over verbal spitballs emanating from the peanut gallery, however, Biden would do well to consider the primary source of these sallies. In a matter of weeks, the Democratic leader has managed to infuriate a not-insignificant swath of the heartland with pure lunacy. First, he abandoned hundreds of Americans and Afghan allies in Afghanistan amid a Taliban advance, in what might go down in the history books as the dumbest military withdrawal from a warzone of all time.

In addition to the American citizens and friendly Afghans, a massive amount of military equipment was left behind – literally enough to build a respectable army from scratch. Aside from the questions of arming the Taliban, how much of these munitions will fall into the hands of Islamic State, for example, is anybody’s guess.

So with American citizens trapped abroad in a very real hostage situation, what are members of the Democratic Party blabbering about? Yes, the fate of the ‘alternative lifestyles’ community trapped in Dodge. “Thank you for rightly putting the spotlight on concerns about the LGBTQI+ community in Afghanistan and the particular threat that they find themselves under,” Secretary of State Antony Blinken told US Representative David Cicilline (D-Rhode Island) this week during a House hearing.

Although there is no official data on the number of LGBTQI+ members stuck in glittering Kabul, I’ll go out on a limb and say it’s somewhere between nearly nonexistent and miniscule. This was just another cheap opportunity for the Democrats to inject their self-serving virtue-signaling into yet another issue, and Americans are quickly wising up to the charade.

While the rights of every person must be respected, this obsession with sexual and transgender lifestyles, which are now being taught to elementary school children, has infuriated many parents who believe the primary task of educators should be teaching children the fundamentals – reading, writing and arithmetic. Anything beyond that appears to conservatives – and an increasing number of Democrats – as politicizing the classroom. The very same thing could be said for the unproven ideology known as ‘critical race theory’, which teaches that white folks are inherently racist.

This leads us to Biden’s biggest blunder of them all – demanding that freedom-loving, gun-toting Americans submit to a Covid vaccine that millions feel they do not want or need. This is exactly what the US leader said back in January that he would never do. On top of this glaring lie, Biden divided the nation by singling out millions of Americans for blame.

“We’ve been patient,” the 78-year-old Democrat bellowed, choosing his tele-prompted words carefully. “But our patience is wearing thin, and your refusal has cost all of us.” The unvaccinated among us “can cause a lot of damage, and they are.”

If the Democrats somehow believed this shot across the bow of corporate America (the mandate requires all companies with more than 100 employees to get vaccinated) would somehow be warmly received, they should really get to work finding a new PR consultant. According to a recent poll, nearly six in ten (58.6%) Americans believe the president lacks the “constitutional authority” to force private businesses to demand that employees receive vaccination against Covid-19. Just 29.7% argued he does, while 11.7% were unsure. In other words, a hugely unpopular decision for the US leader, and coming at a time when midterm elections are fast approaching.

A Washington Post/ABC News poll found Biden’s disapproval rating rising to 51 percent in August, up from 42 percent in April. And considering that the poll was conducted by liberal media allies, the true figure could in fact be considerably worse. For Democrats, bad early starts do not bode well for midterm elections.

In 1993, Bill Clinton entered office with 58 percent public support, yet by 1994, the Democrat’s approval fell to 41 percent and the Republicans took control of Congress. A similar thing happened to Barack Obama. Voted into the White House in 2009 on the fanfare of being the first black US president, one year later the excitement was over, as Obama’s approval rating had dropped to 44 percent. Once again, the Republicans seized control of Congress.

While ending the pandemic is naturally a big concern for average Americans, they are far more concerned that it is achieved without undue pressure, like through the loss of liberty and employment. That is not the American way, and the Democratic Party may very well pay a steep political price in the next elections for forgetting that.