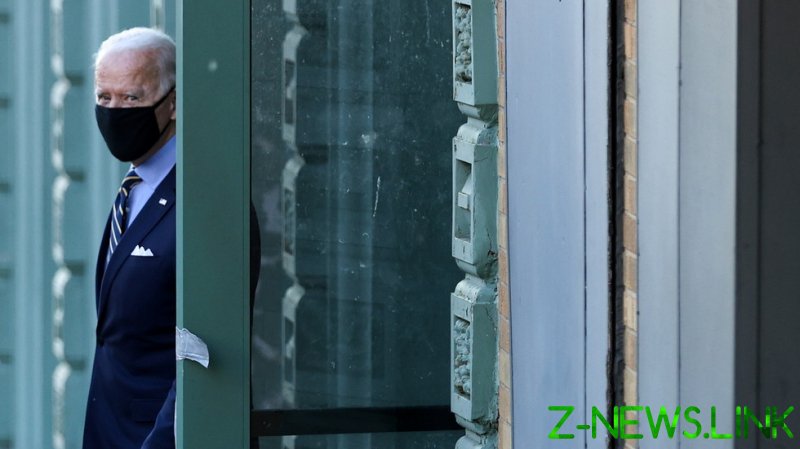 Career politician Joe Biden will take charge of the broken US political system amid a global pandemic. He will be inaugurated on January 20 with Americans so divided that he will be the second straight president who must try to govern a country where about half the people don’t respect him as a legitimate chief executive.

The early days of Biden’s presidency will set the tone for how much of his agenda might be accomplished. They also might be the only days of his reign, as 59 percent of US voters polled in August by Rasmussen Reports – including 49 percent of Democrats – don’t even expect the 78-year-old to be able to serve his full four-year term.

With all of that in mind, here are five things to expect from the Biden administration in 2021:

Things will look worse before they’re allowed to look better

Like a newly hired CEO at a publicly traded corporation, Biden will try to set the bar as low as possible on his starting point. That means his performance will be measured against a weak baseline, and as many of his struggles as possible can be blamed on predecessor Donald Trump.

A CEO does this by dredging out all the skeletons in a company’s closet and consolidating all the bad news to his first earnings report. Accountants will look at the books as harshly as possible and take such steps as recording charges on troubled assets – essentially incurring non-cash costs on paper to reflect a drop in asset values, thereby reducing reported profit. This wipes the slate clean for the new boss and makes it easier to beat the old boss’s numbers in the future.

Biden has already set this sort of stage on the Covid-19 front, predicting a “dark” winter and creating the impression that Trump will kill everyone if he’s left in charge long enough. To the extent possible, he will do the same with economic reports and other measures of how the country was faring when he took the helm.

Covid-19 tyranny will rise before it falls

In the words of President Barack Obama’s chief of staff, Rahm Emanuel, “never let a serious crisis go to waste.” Like blue-state governors, Biden will use Covid-19 to seize more power and control. He’s already said that he will call for Americans to wear masks for 100 days. He also has said that a vaccine won’t be mandated. But various forms of pressure could create a de facto mandate.

“I will do everything in my power as president to encourage people to do the right thing, and when they do it, demonstrate that it matters,” he said.

Biden will be able to say that he changed the trajectory. He will have done so by following much the same policies as Trump, who was blamed for America’s 330,000 Covid-19 deaths. Not coincidentally, Biden’s brilliant Covid-19 recovery plan will be able to ease up right about the same time that the vaccines developed under Trump’s Operation Warp Speed initiative are scheduled to achieve herd immunity.

Progressives will be taken down a notch – or five

Biden will try to lay down the law with the collection of far-left tribes that held their noses to vote for him out of hatred for Trump. He will make clear that they won’t be getting what they thought, and they’ll initially have far less influence than they enjoyed during the Resistance days of the Trump era.

He has already ripped progressives – in a meeting that he thought was private – for costing Democrats votes with their radical calls to “defund the police.” He also told civil rights activists that he’s not going to enact a host of policies through executive orders. He ignored the pleas of black leaders, such as NAACP President Derrick Johnson, in making some of his Cabinet choices.

Only when the 2022 midterm elections draw near – if Biden is still around then – will the fences start being mended with the party’s extreme special interest groups so they can be used again.

The more the merrier with future Dem voters

The one “progressive” issue on which Biden will go all-in will be amnesty for illegal aliens, open borders and a dramatically accelerated refugee program. Black voters will again be betrayed. They’re too reliably Democrat. Trump got the highest percentage of black votes won by a Republican in 60 years, but it still wasn’t enough to stop blue cities such as Atlanta, Philadelphia and Detroit from swinging the election in Biden’s favor at the 11th hour.

Biden’s big play is for the masses of imported voters who can ensure a populist Republican can never again be elected. In that leaked meeting with civil rights leaders, he explained the math.

“If we cannot make significant progress on racial equity, this country is doomed,” Biden said. “It’s doomed not just because of African Americans, but because by 2040, this country is going to be minority white European . . . . You guys are going to have to start working more with Hispanics, who make up a larger portion of the population than y’all do.”

Biden will look for opportunities to work with the Mitt Romneys of the Republican Party to show that he’s a bipartisan healer. Among the first such opportunities could be giving permanent residency to DACA beneficiaries.

One might have thought the demonization of Moscow could finally be given a rest with Trump’s defeat. The nagging Hunter Biden and Biden family scandals make that unlikely for now.

Biden will need to distract from China issues and keep CNN’s zombie viewers focused on Russia. He will likely pick a fight with Russian President Vladimir Putin to show that he’s tough and that anyone who wants to talk about the Bidens’ dealings in China, etc. is a treasonous Russian operative.

Mainstream media and Big Tech will continue to help squelch talk of the Biden influence-peddling scandal and demand that Russia be punished for everything from the SolarWinds hack to bogus allegations of bounties being put on US troops in Afghanistan. It doesn’t matter whether there’s any evidence to show that the Kremlin is guilty. And conveniently, this is another issue where Biden will be able to show bipartisan agreement.