Home / Travel / Five places are worth to go to Sardinia

Five places are worth to go to Sardinia 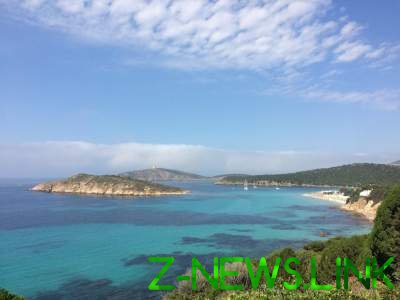 It is difficult to find anyone who wouldn’t want to be here.

Sardinia is not Italy that you immediately inform residents of the second largest (after Sicily) of the Islands of the Mediterranean. And sardines is irrelevant, Yes — there are not more than any other fish, but really proud of bottarga — dried ROE of mullet. Sardinia, in shape like the footprint and Sardis, I think that is the trace of God.

And true, blessed the island, despite the sub-tropical climate (and Africa very close) there are no poisonous snakes or venomous fish, nor poisonous plants, nor in the sea nor on land.

North Sardinia’s famous Costa Smeralda, the emerald coast. The South of Sardinia there are no separate names, but that is where the island’s capital — Cagliari, the city of ancient Rome. In the summer from Moscow to Cagliari to fly Charter flights, for example, every Saturday from the company iFly.

In addition to a wide pristine beaches, Sardinia amazes tourists with ancient excavations and mysterious Nuraghe towers — the remains of the vanished civilization of the second Millennium BC, the purpose of which is still disputed by scientists. 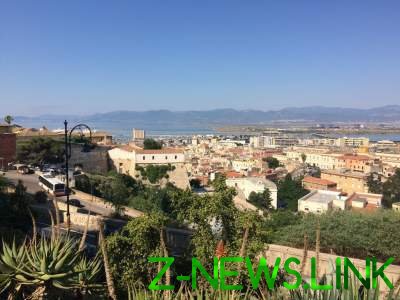 Long, typically Mediterranean Cagliari promenade with palm trees and elegant mansions, called Via Roma. But even before the Romans lived here the Carthaginians and the Phoenicians, and in the middle ages the city was enclosed in walls pisacane. A large part of the wall was demolished after the annexation of Sardinia to Italy in 1861, but the quarter Castellо high on a hill still surrounded by walls. Hence it is convenient to explore the city and its streets — a bit of everything: cathedrals, towers, medieval legends and tourist types. Not far from the shore — mountain “Saddle of the devil”: here’s how it is met in battle the forces of good and evil, and Lucifer dropped the saddle.

To enter the old city through the gate of St. pancratius, whose construction began in the XIII century and in the XX century through a narrow arch rode the tram.

Pisacane built a 37-meter high tower of St. Pancras — the highest point of Cagliari. Here were kept weapons and food, and the chaplain followed the sea — not swim if the Saracens. Ceiling in the tower made of wood that ignite quickly in the event of an attack and the enemy got nothing.

St. Mary’s Cathedral — the main Church of Cagliari. Here tourists surprises a masterful inlays of colored marble and formidable lions, winning the other animals — a gift of the Venetians.

Monument of Savoy, king Charles Felix on the border of the old town had to show the direction of the main road of Sardinia, bound in early nineteenth-century Cagliari, and the Northern “capital” of the SS, but if you install all mixed up, the monument is turned the wrong way and now he shows visitors the quarter, where to go shopping.

Who wants to have lunch, to the other side of the monument — a restaurant in Nui. There, in the monastery cellar and serves classic Sardinian dishes such as roast spit roast pig with an incredible crispy skin, and hold master classes on cooking pasta in Sanski.

The Giants Of Monte Prama 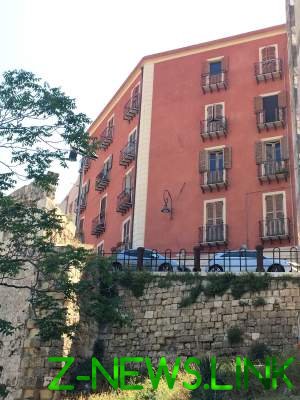 The Northern part of the Castello was damaged by bombing during the Second world war, so after the war it set up museums — there are Pinocateca, archaeological, and even Siamese art based on the collection of artifacts from Southeast Asia the local traveler.

The most famous exhibits of the archaeological Museum of Cagliari giants of Monte Prama, a gigantic statue of Sandstone, discovered by chance in 1974. Farmers dug the field frustrated and rejected stones, which came under the plow. But then one of the stones they could see the outline of a human face and strange concentric circles under the eyes.

Archaeologists excavated on mount a necropolis with sitting in the graves with skeletons, and then a few decades connected with five thousand fragments of to the priests, the warriors, the archers of the IX century BC, appeared before us almost in its original glory.

In General Sardinia is a treasure for archaeologists: on this slice of land between Europe and Africa — the remains of many ancient civilizations. In addition to famous giants in Sardinia there are other, less famous sites of the Nuragic civilization is still not really understood and named in honor of surviving the impressive conical tower with thick walls made of huge stones of the Nuraghe. 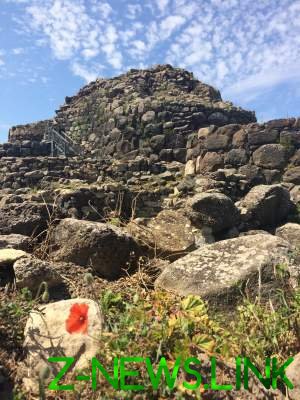 According to modern legend, the Italian archaeologist Giovanni Lilliu boy was playing on the hill and his ball rolled away into some hole. Looking back, the future discoverer of the Nuraghe of Barumini saw in the depths of the mysterious well, and the remains of the walls. When Lilli received education and acquired influential friends, he returned to his native place and began large-scale excavations — as in 50-e years of the XX century the mankind has opened the largest preserved Nuraghe, which was submitted to the world heritage list of UNESCO.

Because no written sources from the nuraghic population gone, every archaeologist puts his version of the structure of dwellings and the appointment of towers. But it is clear that people know how to handle the metal were found bronze figures of archers, soldiers, women, children, animals. Two circles of walls with small Windows, a complicated system of passages, cracks, corridors and cramped interior Nuraghe is clearly built for defense, not for comfort.

But some attribute them ritual significance: that is why the local occultists who feel a strong ancient power places two times a year spend the night “parties”.

The ancient city of Tharros (Tharros) 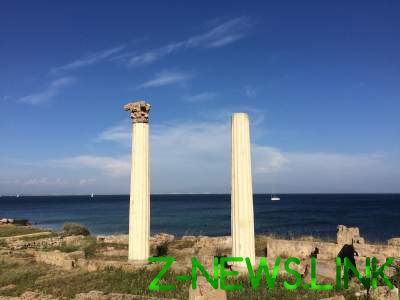 The city of Tharros on the isthmus of Capo San Marco in the heart of Sardinia, was founded by the Phoenicians over 3000 years ago, then it passed from hands in hands, talking about absolutely different principles of construction of the city, which are clearly visible on the excavation.

In the XX century the archaeologists several times had to seek financing, and in 50 years one enterprising scientist came up with a bold marketing move: they installed two graceful white pillars on the mountain — that make for a perfect tourist postcard. Anything that the columns were custom-made on a nearby marble factory, but the beauty of the “antique” look was fascinated by the world community and then sponsors.

Near Church of San Giovanni of the XI century, built on the basis of the VI century — a low, green building, where, as soon as, once tolerated in the past. 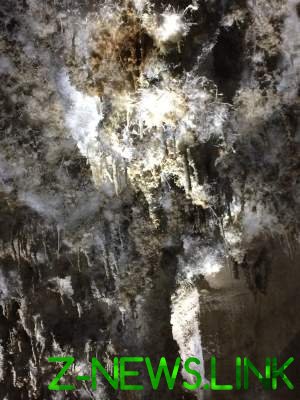 A long serpentine to the caves Of Zuddas tiring, but is slightly to suffer, then to admire the gleaming in the dark, fragile bouquets crystals aragonite growing defying the laws of gravity. Such a large accumulation of geological rarity.

Monumental stalactites — a 12-meter “Medusa”, the same height of the “waterfall” flow directly into the frame, only manage to photograph.

Children entertained by showing the cave cartoons — or rather, stalagmites resembling cartoon characters: dog, goofy, Bart Simpson, snow white and the 14 dwarves at once. And chicken, Buddha, the bride’s bouquet and cloak of a monk… I Have to admit, the imagination of the guardians of the cave are rich, not all tourists can boast of such.

And after all cultural experiences — to swim! Tourist excursions are often well conceived: after the excavations are taken to the nearest famous beauty of the beach — however, ugly beaches in Sardinia does not happen.