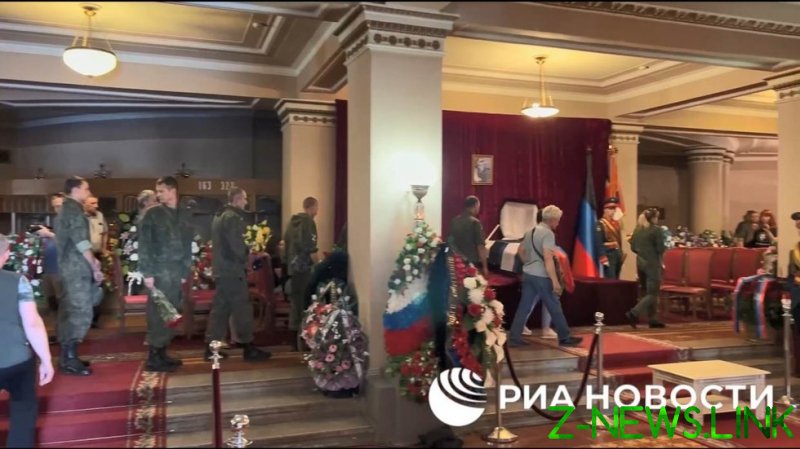 A drama theater in central Donetsk came under artillery fire on Thursday morning, resulting in at least five deaths, according to preliminary reports citing DPR officials. The building was hosting a funeral ceremony for a female militia commander.

According to Donetsk People’s Republic (DPR) officials, some 10 projectiles hit the city center, damaging several buildings including a hotel.

Several people were injured in the shelling. One of them is an assistant cameraman working for RT, who was staying at the damaged hotel with other crew members. He was taken to hospital with a suspected concussion.

At least two shells reportedly struck the theater, where people had gathered to pay their respects to militia Colonel Olga Kachura. All attendants were evacuated and the ceremony was postponed.

The DPR capital regularly comes under what local authorities call shelling by Ukrainian forces, which hold positions within striking range of Donetsk. Officials blamed Kiev for the latest attack.

Ukraine routinely denies attacking Donetsk, claiming that DPR or Russian forces are responsible for the strikes. An aide to President Volodymyr Zelensky responded to Thursday’s news by reiterating the claims, saying “it makes no sense for us to strike some event in Donetsk”.

Kachura was a DPR militia officer who had commanded a rocket artillery unit since 2014. Her battlefield death was announced on Wednesday and was described as a painful loss for the Russia-allied republic.

Her achievements were recognized both by the DPR and by Moscow. President Vladimir Putin posthumously awarded her with the Hero of Russia title.