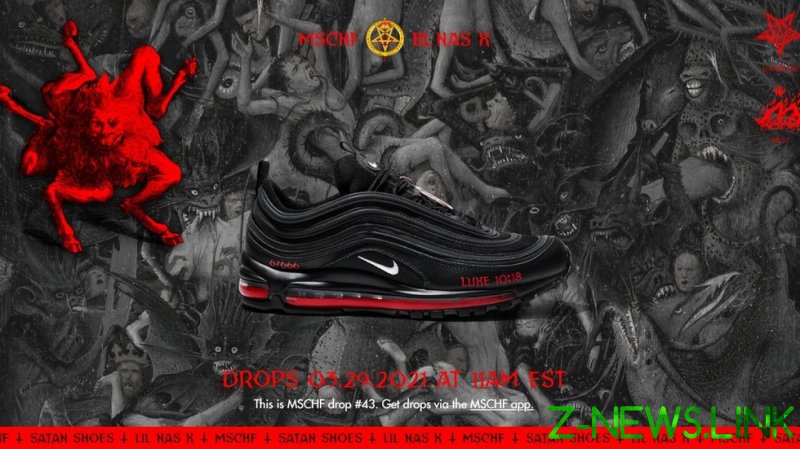 For a mere $1,018, some 666 “lucky” Americans will be able to buy “Satan shoes,” a Devil-themed modification of Nike’s 1997 Air Max sneakers, on March 29. The air bubble inside will be filled with red ink and “one drop of human blood,” according to a promotional tweet that went viral on Friday.

The price is a reference to the Bible verse inscribed on the shoe – “I saw Satan fall like lightning from heaven,” from Luke 10:18. The custom sneakers were apparently a collaboration between the company MSCHF (Mischief) and rapper Lil Nas X.

In what must be a remarkable coincidence, the rapper has just released a music video (WARNING: GRAPHIC) in which he “rides a stripper pole into hell and gives the Devil a lap dance.”

“Satan shoes” were announced just a week after California adopted the “ethnic curriculum” to the praise of mainstream media, who argued it was aimed at ending hatred and racism. CNN positively gushed about it. California, after all, is the state that lifts up the torch of wokeness to light the path to Progress for the rest of America, or something.

Of course, the devil is in the details, such as making elementary school children invoke Aztec gods to empower them as “warriors” for social justice. Among them is the “revolutionary spirit” Huitzilopochtli, the deity of war and sun – and recipient of thousands of human sacrifices.

Modern woke narratives paint the Aztecs as oppressed ‘people of color’ who fell victim to ‘white oppressors’ in the form of Spanish conquistadors, papering over inconvenient facts such as that the Aztecs slaughtered other Mesoamerican peoples to make towers of skulls.

The US, a country that once militarized Christianity to wage the Cold War against “godless Communism,” now seems to relish in ritual humiliation of it. It’s not that Americans are less religious, as the polling suggests, but less Christian – the old religion apparently getting replaced by politics, wokeness and whatever the worship of Huitzilopochtli is supposed to be called.

One of the first things Biden did after taking office was to cancel the ‘1776 project’ created by his predecessor Donald Trump to combat the revisionist history of America from the standpoint of critical race theory. In fact, Biden has embraced CRT and its vision of “equity” as his administration foremost priority.

The Trumpian vision of American history was not without problems – as I’ve noted myself – but no country can survive for long when ruled by people who hate it.

The saddest part about the “Satan shoes” stunt is that it doesn’t seem to be purposefully political or religious, just a nihilistic money grab that perfectly fits the current zeitgeist. It’s no doubt a cross promotion with Lil Nas X’s new single, but the company behind it has also made “Jesus shoes”before – a limited run of white ‘97 Air Max shoes was filled with holy water – as their seventh custom “drop.” The “Satan shoes” are their 43rd.

A January 2020 profile of the company in Business Insider reveals that MSCHF is based in the Williamsburg neighborhood of Brooklyn, New York – the hipster capital of the US – and specializes in random limited-run products that defy definition.

“Our perspective is everything is funny in a nihilistic sort of way,” MSCHF founder and CEO Gabriel Whaley was quoted as saying. “We’re not here to make the world a better place. We’re making light of how much everything sucks.”

In that regard, MSCHF can pat themselves on the back: mission accomplished. As for the rest of the world, I hope it’s watching – and learning.