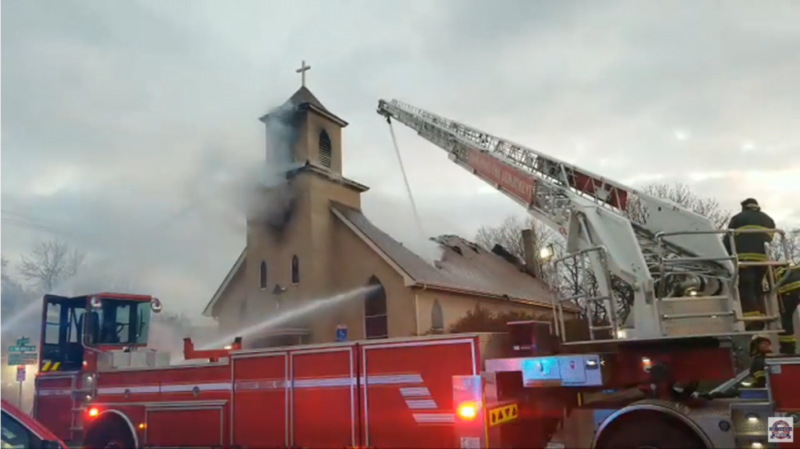 Firefighters responded to a call at the two-story Sacred Heart of Jesus church on Monday evening, where the Minneapolis Fire Department said the majority of the roof had collapsed by around 9pm local time.

Footage of the conflagration has circulated online and in local media, showing sizable flames and a column of smoke billowing from the church’s roof as firefighters worked to put it out from ladders above the building.

It’s unclear what triggered the fire, which broke out across town from the courthouse where Chauvin’s trial was held.

The church is located on the 2200 block of Fifth Street Northeast, which is about a 12 minute drive or a one-hour walk from the Hennepin County Courthouse. There is so far no indication that the blaze was linked to the demonstrations downtown. A journalist with a local ABC affiliate, Ryan Raiche, cited a church chairman who suggested the fire might have stemmed from the furnace inside the building.

Protesters gathered for a rally outside the courthouse on Monday evening, holding a brief march before disbanding. Demonstrators were seen carrying signs and shouting anti-police slogans while demanding a guilty verdict for Chauvin, who is accused of murdering suspect George Floyd in custody last May after kneeling on his neck for more than nine minutes. After some three weeks of witness testimony, jurors began mulling a verdict earlier on Monday.

Following weeks of heated protests and rioting in Minneapolis and elsewhere in the US over Floyd’s death last year, city authorities have taken strict security precautions amid Chauvin’s trial, including heavier law enforcement presence, National Guard deployments and curfew orders. Other recent police shootings, such as a fatal encounter with 20-year-old Daunte Wright earlier this month in nearby Brooklyn Center, have only raised tensions, prompting other cities to go on high alert for potential unrest as well.