Home / WORLD / ‘Fire and brimstone’: Liberals alarmed as Steve Bannon calls for ‘shock troops’ from GOP for ‘sweeping’ victory in 2024

‘Fire and brimstone’: Liberals alarmed as Steve Bannon calls for ‘shock troops’ from GOP for ‘sweeping’ victory in 2024 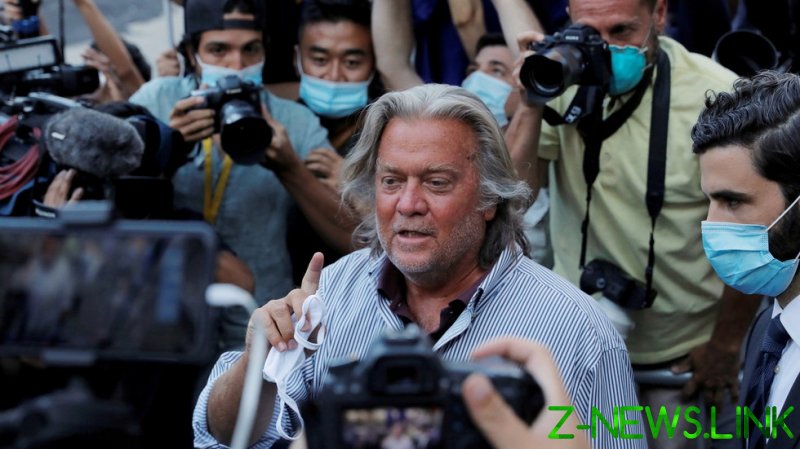 Bannon reportedly met with Trump political appointees this week and discussed both the president’s and the party’s future, insisting “shock troops” would be needed to secure conservative victories.

“If you’re going to take over the administrative state and deconstruct it, then you have to have shock troops prepared to take it over immediately,” the political strategist and podcaster told NBC in an interview on Saturday, following his meeting. “I gave ’em fire and brimstone.”

In his interview, Bannon dismissed “standard Republican policies” and promised more productive ‘MAGA’ wins in the upcoming midterm and presidential elections, as candidates would now be pre-prepared with teams to take over federal positions. The former White House official claimed that not having filled the approximately 4,000 open positions in the federal government with supporters was partly what had kept Trump from doing more during his four years as president.

Bannon was one of Trump’s closest and most controversial advocates during his 2016 presidential election campaign, and previously worked in both the conservative film and media fields. The political strategist’s latest fiery words trended on Sunday on Twitter, with critics piling on and denouncing his “shock troops” comment as heinous and some even claiming his recent Republican meeting was “seditionist.”

Bannon, who was pardoned by Trump earlier this year, spoke to approximately 200 members of the newly established Association of Republican Presidential Appointees (ARPA) at the Capitol Hill Club. The ARPA was formed to create a resource for future GOP officials tapped by a Republican president to fill a federal job.

Bannon was one of multiple Trump associates to be subpoenaed earlier this week to appear before a House committee investigating the January 6 Capitol riot. The subpoena cites his alleged insistence that members of Congress should not certify the 2020 presidential election results.