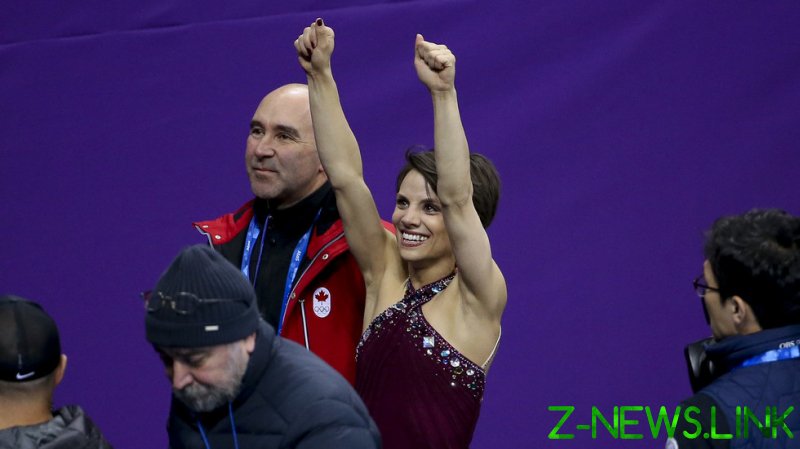 British commentator Simon Reed, along his broadcast partner Nicky Slater, have been suspended by the International Skating Union (ISU) after Reed was overheard referring to Olympic gold medalist Meagan Duhamel as “that b*tch from Canada” live on air. Slater was overheard laughing at the remark.

Reed and Slater were on commentary duty for the pairs event of the World Figure Skating Championships when Reed said the offending phrase about Duhamel, apparently unaware that his comments had been captured on the live feed.

Duhamel won gold at the 2018 PyeongChang Olympics and took silver at the 2014 Olympics in Sochi.

Reed’s comments came after Duhamel has been critical of the commentary duo, and had suggested that the ISU should replace them with another team of analysts after apparently becoming aware of their relative inexperience in the role.

“[They] admitted they don’t watch skating often so they ‘aren’t sure’ about jump rotation. Um. There are better options ISU!,“ Duhamel tweeted on Wednesday.

And after Reed’s vulgar reference was discovered, Duhamel replied to a tweet referencing them saying, “Hahahahahaha!!!! Well done.“

She also tagged the International Skating Union in the social media post.

The ISU wasted little time in moving to suspend both Reed and Slater.

“Following the Pairs Short Program at the ISU World Figure Skating Championships 2022, an open mic picked up a disrespectful comment made by the two commentators working on the international signal,“ the ISU tweeted.

“The ISU is shocked by the language used by the two commentators which does not reflect its views whatsoever. The ISU strongly condemns any statements of a discriminatory or prejudicial nature.

“There is no place for harassing and abusive language or remarks and behavior in sport and our society. The ISU took instant action with its service provider to suspend both commentators with immediate effect and neither will cover any future Figure Skating events for the ISU.“

They also indicated that a formal investigation into the incident will be forthcoming and offered their “sincere apologies” to Duhamel for the “inappropriate and unacceptable” behavior of the announcers.

However, in a series of subsequent tweets Duhamel confirmed that she had received a formal apology from Reed and that she considered the matter closed, also saying that she didn’t intend for the commentary team to be fired but that she wanted more “respectful commentary”.

“Skating twitter, I hope we all enjoy some amazing skating today. I have received personal apologies from Simon Reed and the ISU president and I don’t think a public apology is necessary at this point. I appreciate and respect their apologies,“ wrote Duhamel.

“I wasn’t trying to get them fired. That was the furthest of my intentions. I was hoping for respectful commentary that provided insight and education. Which they have both done very well in the past. I was one of 100s if not 1000s of people to comment on the things that they said.“