Home / economy / Figure of the day: labour productivity in Ireland is 4 times higher than in Russia

Every able-bodied Irishman for one hour of work contributes to the GDP of their country is incomparably more money than the Russians.

The experts of the Organization for European economic cooperation has published very interesting data on how many U.S. dollars contribute to the GDP of their country, on average, employees around the world. In other words – the data on labor productivity, expressed in monetary units.

The leader in this list Ireland: 1 hour citizen of this country contributes to the GDP 95,5 dollars, while in Russia is 4 times less – only 25.4 per dollar! 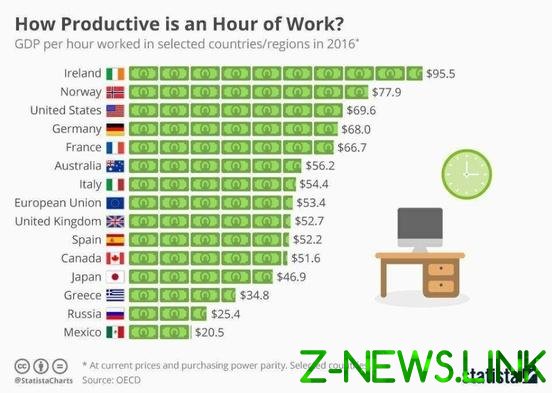 This huge gap can be in addition to the chronic economic backwardness of our country to explain the huge number of slackers feeding at the expense of the budget: the army of officials, military personnel, security officers and various security guards, not producing ANY-thing, but living better than the vast majority of their fellow citizens.

What about the prosperity of the country may be involved in such total backlog?

And here are data on the number of working hours in different countries:

There is also a striking fact that the citizens of Russia have to work a lot more than people in developed countries, but to be content with a low standard of living.