Home / Society / Figure of the day: 7 items on which the state propaganda lies about the protests in Moscow

Figure of the day: 7 items on which the state propaganda lies about the protests in Moscow 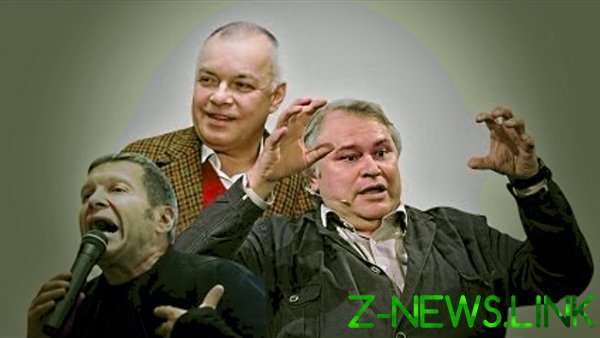 The political scientist Alexander Shmelev made the registry lies gospropagandistov based on watching Russian TV and reading social networking:

1) outright lie about the aggressive behavior of the protesters. Allegedly, they threw firecrackers, was paskalis tear gas, attacked asguardian, tore chunks of tile to throw at the police etc. This line is not very pleasant, because it is the kind that no matter how much I deny, “residue” still remains, but generally not very dangerous because it is easily refuted as numerous video footage, and offer a chance to look at any of the protests up close, to see how the protesters are polite and friendly.

2) Indirect lie about the fact that the protesters inconvenience to other residents – cover the tracks, forced to close cafés and bars, provoke and crush tube. Generally not dangerous, and is easily refuted by video footage and numerous reports confirming that everything is the handiwork of the security forces, but they blocked the streets and created a crush and cork, were forced to close cafés and bars (including driving outside visitors).

3) outright lie about the fact that protesters will get different rewards: money, crypto-currencies (according to Pavel Danilin, the Ren-TV), alcohol (reported there), etc. Unpleasant but not very dangerous. I agree with the comic posting Maxim Goryunov – for people accustomed to Express loyalty to the authorities in the calculation of the different benefits, this only fuels interest in the protests: but how is it possible to get more? 🙂

4) Whataboutism. They say, look how harshly dispersed the protesters in France, we have more flowers. Refuted very simply – it is enough to show photos and videos in France behave the protesters themselves (broken Windows, burning cars, set fire to the Prefecture and police stations, heaps of stones, flying to the police, etc.), and then to ask see if anyone saw at least one broken window or burned a car from us?

5) Emphasis on the fact that a fair number of participants in the Moscow protests – out of town. In my opinion, it does not work in the negative, but only a plus. Muscovites have long been accustomed to the fact that among their colleagues, friends and neighbors, many were born in other cities of the country, and then be removed from the apartment without permanent registration. And for the rest of Russia, it only confirms that the Moscow protests – it’s not just “yuppie Muscovites”, but throughout the country. Plus in response to these arguments is always possible to point to the Moscow mayor’s office, where Muscovites in the afternoon with fire not find, the part just arrived from other regions, and some (like the Vice-mayor Loskutova) and generally foreigners.

6) “the protests are for vertical” / “It’s all Bulk and navalnisty do”. The most thin line resorted to maxrowsize propagandists, like journalist Kashin. At first glance, she even looks like a reality: the Bulk of the current protests really supported from the beginning, associated with, Yashin and Sable – one of the main media persons among independent candidates, the headquarters of Navalny in Moscow – the Creator of the relevant events, etc. and generally not very clear at first glance – where is the discrediting, especially for persons in General sympathetic to the Bulk action (including for myself). However, it is clear that this focus directly reduces the number of potential supporters of the protests. First, among the politically active public has some number of those speaking against Putin and co, while negative applies to the Bulk. Second, among the non-political people, this immediately gives rise to associations: protesting those who always dissatisfied with everything, nothing happens, these people always out on the streets for any reason. So I’m sure that now it is essential to emphasize the coalition character of the current protests. To be constantly reminded that they are unique – including the fact that United all. And along with Bulk and sympathetic to the people they involve and are in a very difficult relationship with him Apple and beeps, plus a fair number of Communists, some socialist, almost all independent of the city’s municipal deputies, and most importantly – a huge number of regional grassroots activists who are far from the General Federal policy, but focus on the protection of parks and gardens, against buildings, etc.

7) Finally, the reason for the protests. Ren-TV and others like him present it in the most rude way, saying that independent candidates failed to collect the required number of signatures in their leaves and discovered a bunch of dead, etc. However, even from a relatively neutral people I’ve heard some doubt that all independent candidates, indeed, were able to collect the required number of signatures is decorated. They say, smoke without fire, surely there was really some schools (quite often even go “softening” the argument that supposedly it was an impassable barrier, and the requirements for the signatures too bureaucratic, etc.). Moreover – if I was far from this campaign, I would probably could also think about something like that. In the end, the barrier was indeed almost insuperable, and the requirements for the design is stupid.

It just so happens that this time I had close contact with the headquarters of one of the independent candidates and saw the whole process of collecting signatures with my own eyes, so I can confidently testify that the impossible was made: these signatures were collected not just how much, but with a large margin, so that in the end from them were selected the most perfect, which is impossible to find fault with (to the extent that in response to the demands of “legible handwriting” were left only the signature where data was written in big block letters, for certainly it was impossible for them to prikopat). But how to prove it to the people directly in the campaign is not involved? In my opinion, this is one of the main tasks. The easiest way would be candidates stupid to put their petitions in the network (hopefully all of them scanned?). However, I suppose it will be some violation of the law on personal data or something like that…

Anyway I suggest to think about what I can do. I think in the field of propaganda, counter-propaganda is now the most important. It is not necessary to give people the opportunity to assuage his conscience, reasoning that “after all there was something fishy”. Each justifies the actions of the authorities should clearly understand that he is on the side of lies, lawlessness, violations of the law and seize power. While the protesters, on the contrary, speak in defense of law and right.

So in the end history will put everything in its place, and its characters will be the ones who now take to the streets. But at the mention of those who now justify the government’s actions, the children will be hostile to wrinkle her nose like someone farted.