Fever-pitch predictions of war fall short, as Russia withdraws troops from Ukrainian border. But will the move help calm tensions? 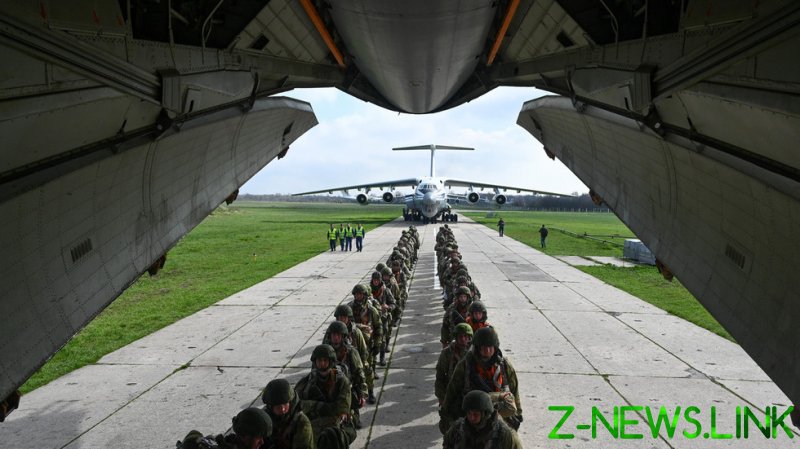 For weeks now, there have been warnings that Moscow’s deployment of tens of thousands of troops on the border with Ukraine could be a precursor to invasion and all-out war in Europe.

While Russian officials have insisted the move was a response to increased activity by NATO forces, and Ukraine’s own buildup, the US has deemed it part of a pattern of “escalatory actions,” and Kiev has asked the West to step up its presence in the region. The EU has expressed concern over the situation, too, and Anglophone media has been awash with claims that the Kremlin is preparing for war.

However, in a move seemingly designed to put an end to the tense stand-off, Russian Defense Minister Sergey Shoigu announced on Thursday that the units stationed near the frontier would soon begin returning to their home bases. According to him, “the goals of the sudden inspection have been fully achieved. The troops demonstrated their ability to ensure reliable defense of the country.”

Whether it will be enough to bring relationships between Russia and the West back from the brink following the strain of recent weeks remains unclear. On Thursday, US State Department spokesman Ned Price said that Washington will “continue to watch very closely” the situation on the Ukrainian border. “To the best of our knowledge, it remains an announcement. That’s why we’re going to continue to watch very closely,” he added.

Then, on Friday, footage was released by Russian army chiefs showing personnel packing up their equipment, loading vehicles onto transports, and reversing tanks into amphibious landing ships after drills concluded in Crimea. At the same time, Russian President Vladimir Putin put an end to Western rumors earlier this week that he would use a speech in front of the Russian parliament to announce the annexation of the Donbass. Instead, he focused largely on domestic policy, while arguing that Russia was keen to restore friendly relations with all nations. He did add, though, that foreign aggression would be met with a decisive response.

Responding to the developments, Ukrainian President Volodymyr Zelensky has said the troop withdrawal “proportionally reduces tension,” but he added that his country is “always vigilant.” Over previous weeks, he had sounded increasingly determined to align his country with the West in the face of what he claimed to be Russian aggression, arguing that “NATO is the only way to end the war in the Donbass.”

Ukraine’s accession to the US-led bloc, and the prospect of American, German, and British troops on the border, has long been seen as a red line by Russia. While this week’s attempts to de-escalate may remove some of the urgency from Kiev’s efforts, it appears that European capitals are already reluctant to provoke Moscow without a clear cause.

Speaking at the start of the month, as the standoff was worsening, Ulrike Demmer, the deputy spokesperson for the German government, told reporters that the question of Ukraine’s membership of the bloc was not currently on the table. “As you know, with regard to new members NATO generally follows an open-door policy,” she said. “Ukraine has a right of free choice and its own political needs. However, no further steps towards its membership are currently envisaged.”

But, even as Russian troops redeploy away from the border, there appears to have been no change in the bloody fighting in the Donbass. Moscow has already warned that any offensive by Kiev could soon become a humanitarian catastrophe, and has said that it would intervene to prevent such a crisis.

Unless a resolution is found to de-escalate the situation between Ukrainian forces and troops loyal to the two breakaway, self-declared Donetsk and Lugansk republics, it is hard to see how the region will not remain tense.

Earlier this week, Zelensky invited Putin for a summit near the contact line, but the Kremlin has insisted it will not discuss imposing a settlement in Eastern Ukraine without Kiev first holding prior talks with leaders in the Donbass.

Another front in rapidly deteriorating relations between Russia and the West has opened up in the Czech Republic, which has expelled 18 Russian diplomats over claims Moscow’s intelligence operatives were responsible for an explosion at an ammunition depot in the country in 2014. Prague says the weaponry had been destined for troops in Ukraine via a Bulgarian arms dealer, and that Russian military intelligence operatives were behind it.

Moscow has since declared 20 Czech envoys as persona non grata, a response that Prague has since described as “stronger than expected,” calling on fellow NATO countries to take equivalent measures in solidarity. The Central European nation’s new foreign minister has warned that, unless the decision is reversed, over 60 Russian embassy staff could be expelled.

Diplomatic representation been hit hard in recent weeks, with other EU states such as Latvia, Estonia, and Slovakia expelling Russian envoys in support of the Czechs. Meanwhile, the Kremlin and the White House are now missing ambassadors in each other’s respective capitals, with both top diplomats having returned home for crisis talks. This has effectively cut off high-level contacts at a time when tensions are rapidly escalating.

However, other issues that have proved thorny for relations between Russia and the West appear to be resolving themselves. On Friday, opposition figure Alexey Navalny announced he was ending his hunger strike in prison, where he is serving time for breaching the terms of a suspended sentence for fraud. The anti-corruption activist has been demanding access to his choice of doctors for leg and back pain. As in most countries, it is not customary for inmates to choose their own physicians in Russia.

Protests held two days earlier by his supporters drew only a fraction of the half a million who had pledged to attend online. The demonstrations were largely peaceful, with only a small number of clashes, although St Petersburg bucked the trend with hundreds of detentions. If limited attendance was a sign that support for Navalny is on the wane, it will be helped even less by revelations from his lawyers on Thursday that he had actually been granted access to private medics earlier this week, in addition to seeing prison doctors, who had urged him to end his hunger strike.

For some reason, this fact was not disclosed until after the protests were held and, in a jubilant post on Instagram on Friday, he credited the rallies with improving his treatment in prison. “Thank you – I have now been examined twice by a group of civilian doctors,” he said, while admitting that “the last time was right before the rally.” He said he was still eager to see the doctors of his own choice, but would “begin to get out of the hunger strike.”

Navalny’s case has been a source of tension between Russia and the West, with the EU and US warning of further sanctions if anything happens to him while in jail. If the case begins to take on less prominence, it removes another potential flashpoint that could lead to further deteriorations in ties.

With Moscow’s decision to dial down the stand-off over the Ukrainian border coming into effect, and prominent domestic political issues beginning to resolve themselves, it remains to be seen whether weeks of tensions will just fizzle out.

Western commentators and journalists have a mixed track record of predicting what will happen next in Russia. Earlier this year, a number of prominent UK and US newspapers told readers that Putin had both cancer and Alzheimer’s disease, and would soon be stepping down. Others argued that there would be a concerted campaign to end Navalny’s life in prison. Now, while many have been quick to declare war was imminent, once again it seems they’ve come up short.