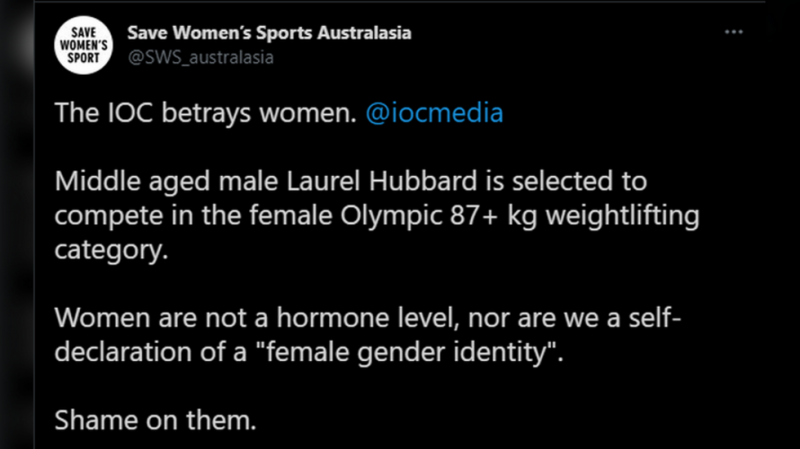 The New Zealand Olympic Committee (NZOC) CEO Kereyn Smith said that Hubbard met the requirements to compete in the international games, and stressed that New Zealand’s team has a “strong culture of… inclusion and respect for all.” Smith acknowledged that the decision was controversial, stating that “human rights” must be balanced with “fairness on the field of play” when it comes to gender identity in sports.

However, many took issue with the assertion that New Zealand had carefully weighed all the relevant factors before inviting Hubbard to compete.

Save Women’s Sports Australia, which campaigns to keep female sports ‘fair’ in Australia and New Zealand, accused the IOC of “betraying” women.

“Women are not a hormone level, nor are we a self-declaration of a ‘female gender identity’. Shame on them,” the group wrote in response to the announcement.

Hubbard’s history-making participation in the Games will set an “abhorrent” precedent that will cause immense harm to female sports in years to come, others warned.

One commentator claimed data suggests that “mediocre” male athletes would be champions if they were allowed to compete in female events, suggesting that Hubbard’s selection was deeply unfair and undermines the integrity of women’s sports.

Others simply accused New Zealand of “cheating” by adding Hubbard to their team.

There were also calls for boycotts. Women should refuse to compete against Hubbard, outraged Twitter users said.

“How the hell did the world get to this point? What happened to logic and common sense?” asked one exasperated observer.

Some took the position that Hubbard’s participation in the Tokyo Games was the inevitable result of “feminists” undermining their own interests, and noted the irony that female spaces are “being taken over by men.”

“They will soon say trans women are employing patriarchy in female spaces,” a commenter predicted.

NZOC announced on Monday that Hubbard would represent the country in the super-heavyweight 87kg category at the Tokyo Games, which are set to begin next month, making the 43-year-old the first transgender woman to compete in the international games. Hubbard, who will be the oldest lifter at the event, previously participated in men’s weightlifting competitions before transitioning in 2013.

The athlete said in a statement she was “humbled” by the outpouring of support that she has received from her fellow New Zealanders.

Hubbard has been eligible to participate in the Olympics since 2015, when the International Olympic Committee (IOC) ruled that transgender athletes could compete in women’s events so long as their testosterone levels are below 10 nanomoles per liter for at least one year before their first competition. However, critics of this decision have argued that the policy doesn’t do enough to counter the physiological differences between biological men and women.

Hubbard’s qualifications for the Olympics has been part of an ongoing debate over transgender athletes competing in women’s events. Last month, Mark House, a US attorney and International Weightlifting Federation (IWF) technical official, argued that the New Zealander should not be allowed to participate in the Tokyo Games, but said that anger over her qualifying for the Olympics should be placed on the IOC, and not on the athlete herself.

“Her participation will seriously diminish the chances of having a rational discussion about transgender policies,” House said, adding that he questioned whether the IOC’s policy on the issue was actually backed by science.