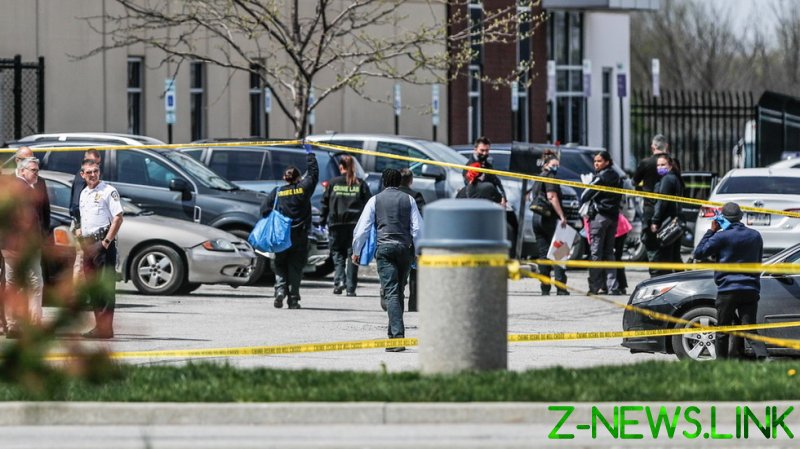 Police responded to the massive FedEx facility southwest of the Indianapolis international airport late on Thursday. They found multiple casualties and the suspect dead, of what they said was a self-inflicted gunshot wound.

He was identified by the media – but not yet by the authorities – as Brandon Scott Hole, who worked at that FedEx facility but was fired last year.

Paul Keenan, FBI’s special agent in charge at the Indianapolis office, confirmed on Friday that the suspect had been interviewed by the Bureau’s agents in April 2020.

“In March 2020, the suspect’s mother contacted law enforcement to report he might try to commit ‘suicide by cop’. The suspect was placed on an immediate detention mental health temporary hold by the Indianapolis Metropolitan Police Department. A shotgun was seized at his residence,” Keenan said in a statement.

“Based on items observed in the suspect’s bedroom at that time, he was interviewed by the FBI in April 2020. No Racially Motivated Violent Extremism (RMVE) ideology was identified during the course of the assessment and no criminal violation was found. The shotgun was not returned to the suspect,” he added.

Authorities have not yet announced what weapon Hole allegedly used in Thursday night’s rampage. Dispatch traffic mentioned a .223 caliber rifle, and said the lone gunman started “randomly shooting in the parking lot” before going inside the warehouse. A FedEx policy banning employees from using cell phones prevented people from calling for help. The company said it was re-evaluating the policy in the wake of the shooting.

FBI’s Keenan told reporters on Friday that the Bureau was assisting in the search of the suspect’s residence and that it was “premature” to speculate on the motive behind the shooting.