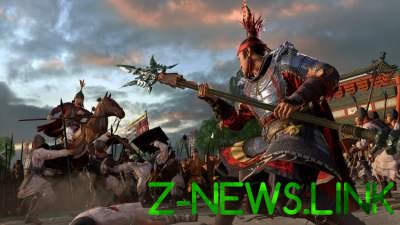 China sample 190 years after the fall of the Han Empire, disunited and fragmented – the country needs a new dynasty with new ideals.

Total War: Three Kingdoms players will be able to unite China and build your Empire, taking the role of one of the twelve legendary commanders of the Chinese semi-mythical characters of the novel Lo Guanchzhuna “three kingdoms”. China sample 190 years after the fall of the Han Empire, disunited and fragmented – the country needs a new dynasty with new ideals.

Twelve far-sighted military leaders are ready to seize this opportunity, so it all depends on the player who he will lead to victory? Consummate generals, mighty warriors, wise policy – all of these characters have their own goals and play style. Many of the secondary characters ready to obey, to lead the army, of the province and to strengthen the growing Empire.

To help players make an initial choice of one of 12 characters, the Studio Creative Assembly introduced a fresh video that tells about each of them. Lead the nation to healing along with BJ friendly Bay? Or burn everything in its path in the role of the Queen of thieves Zheng Jiang? And can to support the great strategist of Cao Cao, is able to direct against each other, even brothers? Every warlord his vision of the art of war:

Sun Jian The Tiger Of Jiangdong;
Cao Cao – Puppeteer;
Liu bei – the defender of the people;
Zheng Jiang – the Queen of bandits;
Dong Zhuo Was A Tyrant;
Gunson Tsang – Associate;
Yuan Shu – The Applicant;
Kun Rong – a Great scholar;
Liu Biao Is An Aristocrat;
Zhang Yan – soldier of fortune;
MA Teng Is A Supporter;
Yuan Shao is the leader of the Union.

For those who want a historical, not a colorful game, has a mode Records, offer a more realistic depiction of the wars of that era and not giving the advantages of the legendary commanders. The single player campaign in both modes are the same, but in the Records military leaders are ordinary people and therefore more vulnerable. To win, you have to carefully think over tactics, and any mistake can discourage followers from the player. The battle lasts about 30% longer, less dynamic and colorful. The troops quickly get tired and become less effective in combat. As a result, every tactical decision receives additional weight.

See also:  In the Network shown by the blue flames that erupted in the United States. Video

Since Sega and Creative Assembly announced Total War – Three Kingdoms, was released a lot of commercials telling about the features of gameplay, main characters and plot points. In September, it was announced release date of the PC – 7 March, but in February, the authors reported that the final part of the series that combines turn-based campaign and battle in real time, will take a bit more time, and moved out on may 23.

Currently those interested can pre-order Total War: Three Kingdoms on Steam for 1999 rubles as a reward after the game they will receive the complement of the Yellow Turban Rebellion, with new leaders, skills, weapons and classes. System requirements of the project are quite high, so 60 fps in Total War: Three Kingdoms can only count the owners of processors are worse than Intel Core i7-8700K.