Home / WORLD / Fear of Covid-19 no longer petrifies 1 in 3 Americans, but indecision about how to move forward does

Fear of Covid-19 no longer petrifies 1 in 3 Americans, but indecision about how to move forward does 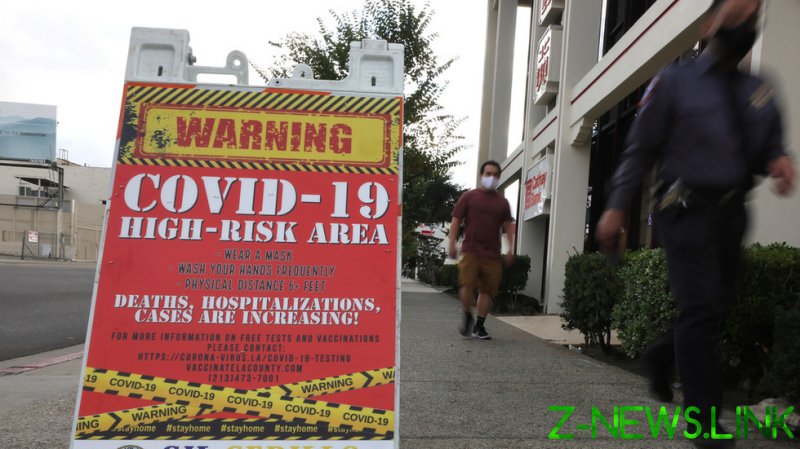 One in three Americans no longer believes returning to their pre-coronavirus existence poses a ‘moderate or large risk’, according to an Ipsos poll published on Tuesday. While this sounds like a lot of Americans are still paralyzed with fear, it actually represents the best national outlook since October, the pollster claims. A quarter believe the risk is ‘small’, and just nine percent believe there is no risk at all.

Adults under age 29 are the least likely to see Covid-19 as a risk, but 58 percent still believe it represents a moderate or large risk. Fewer than half of Republicans continue to fear the pandemic. However, attending in-person events and conferences or taking a vacation is still off-limits for most Americans, with the vast majority either uncertain of when they might resume these activities or pledging to wait until the government gives the green light.

Indeed, confusion still reigns over how exactly Americans will regain the confidence necessary to go ‘back to normal’. On one end, more than a quarter (28 percent) of Americans are already attending small parties and gatherings. However, another quarter (24 percent) won’t make a move until officials declare it’s safe for people to resume normal activity – a group that might be waiting a long time, given the foot-dragging that notoriously characterizes American health bureaucracy.

Meanwhile, 29 percent of those over 65 years old – long considered the highest-risk group for infection by the novel coronavirus – say they will wait for the vaccine before they even consider resuming normal life.

The least likely to return to normal anytime soon are college-educated Americans and those who politically identify with the Democratic Party. Just over a third (34 percent) said they would prefer to wait for the vaccine and the official go-ahead, respectively, before resuming normal life. There are plenty of reasons for their willingness to wait – those with a college education are more likely to be able to work from home, and Democratic governors like New York’s Andrew Cuomo and California’s Gavin Newsom (not to mention President Joe Biden) have been among the loudest proponents of lockdowns.

While the vaccine was initially marketed as the only surefire way to get the US back to normal, vaccine recipients actually seem to be more fearful of doing so than any other group. A whopping 76 percent of those who’ve received the jab still believe the virus is a high risk, and most vaccinated Americans continue to wear masks, social distance, and otherwise observe the pandemic rituals they have been enacting since March. Fully 97 percent continue to ‘mask up’ despite being vaccinated.

More than half of Americans (53 percent) trust their newly inaugurated president for information about the virus, with Biden having benefited from positive media coverage during his brief period in office.

The Centers for Disease Control are trusted for Covid-19 information by a little over two thirds of the population, though just over half of Republicans put their faith in the agency. Like most of the US’ health bureaucracy, the CDC has issued conflicting guidance at various points in the pandemic.

But less than half the US – 47 percent – trusts news networks to provide information about Covid-19, and cable and online news (38 and 36 percent, respectively) are even less trusted. These numbers line up with other recent polls – such as the Edelman survey, which found last month that just 46 percent of Americans trust the media and confirmed Republicans are more likely to believe the media’s inaccurate information is a deliberate attempt to mislead the viewer rather than a genuine mistake.