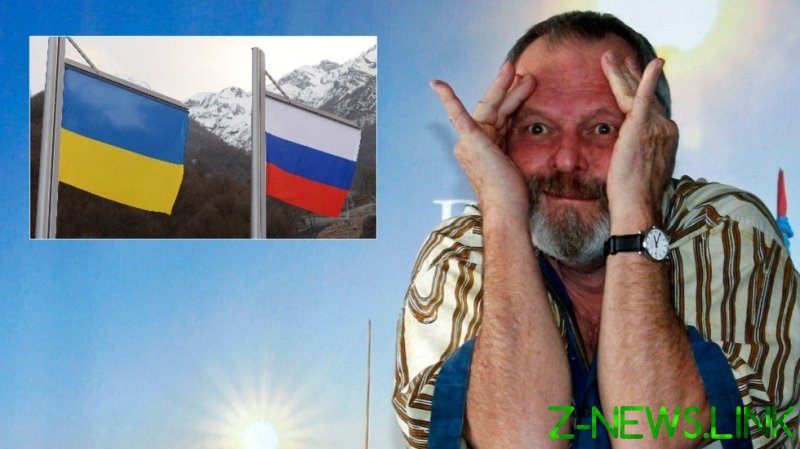 The Ukrainian authorities consider Moscow an enemy, as they accuse it of annexing Crimea, and of other alleged “aggressive” acts, during the fall-out from Kiev’s tumultuous 2014 ‘Maidan.’ That Western-backed uprising saw the country’s democratically elected government toppled from the street.

Kiev may feel uncomfortable with the reminder that some in the West haven’t looked into the geopolitical processes that followed the collapse of the Soviet Union in 1991 and still think that not just Crimea, but the whole of Ukrainem, is under Moscow’s control.

Indeed, not only ordinary citizens who see things this way but also renowned cultural figures, such as veteran movie director and former member of the iconic Monty Python comedy troupe, Terry Gilliam.

Gilliam was a special guest of the 12th Odessa International Film Festival, which took place in the Ukrainian Black Sea resort this week. However, he apparently thought that he was in Russia.

“Thank you, Russia! Thank you, Odessa,” the 80-year-old said at the closing ceremony on Saturday after receiving an honorary award for his contribution to cinema, which includes such movies as ‘Time Bandits,’ ‘Brazil,’ ‘Fear and Loathing in Las Vegas,’ ‘The Man Who Killed Don Quixote’ and others.

The British director’s words prompted a shocked silence among the audience, while the event’s host hurried to remind the foreign guest that Ukraine and Russia were two different things. “You should know” that, she insisted.

Gilliam tried to somehow downplay the blunder, saying: “I’m confused by Russia… I’ve been confused by the Ukraine.” But he couldn’t finish as the crowd of Ukrainian actors, directors and producers started chanting the World War Two Nazi collaborator slogan: “Glory to Ukraine. Glory to Heroes.”

The controversial salute is associated with the Organization of Ukrainian Nationalists (OUN) and its armed wing, the Ukrainian Insurgent Army (UPA), who allied with Hitler’s Germany during World War II and took part in ethnic cleansing, of both Polish and Jewish populations.

The motto has been widely adopted by the Ukrainian authorities in recent years. It was even placed on the country’s national team kit for this summer’s Euro 2020, before organizers from UEFA asked for it be removed or taped over, due to its historical connotations.

A video was later uploaded on the Odessa film festival’s Instagram page, in which Gilliam was given an opportunity to repeat his acceptance speech and this time do it right.

“It’s a joy to be here in the Ukraine. Especially, in Odessa,” he said in the short clip, adding that the Black Sea city was especially dear to him, as it was the set for ‘Battleship Potemkin’ by legendary Soviet director, Sergei Eisenstein.

The 1925 classic was one of the reasons he became a moviemaker, Gilliam confessed. The director also said he was really grateful to Ukraine and Odessa for being provided with a chance earlier that day to visit the Potemkin Stairs, which featured in the most iconic scene from Eisenstein’s movie.