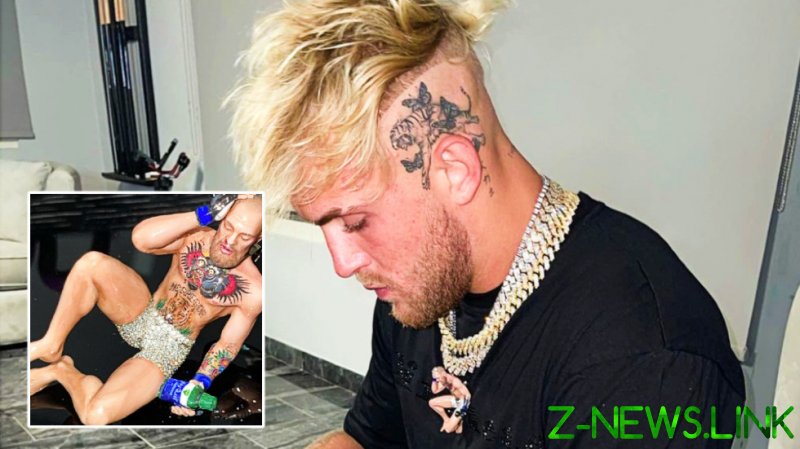 Paul had taunted McGregor before the ill-tempered weigh-in for his tempestuous trilogy fight against Dustin Poirier, promising that he had bought the tacky keepsake in a further bid to rile the temperamental former champion.

He has now shown off the creation on his hugely-followed social media platforms, allowing a jeweler to place it around him after brandishing a sleeping aid that he joked McGregor will need while venting at the object of his vitriol ahead of a make-or-break night for ‘The Notorious’.

“McGregor, you’d better win tonight because otherwise we’re not going to be able to fight,” warned Paul, staring into the camera and smirking.

“If you lose, your career is over and that $50 million offer I gave you won’t be on the table anymore. Don’t go sleepy-sleepy. Goodnight, McGregor – f*ck you, b*tch.”

The 24-year-old also lampooned himself as he stood next to his fighting brother, Logan, and accepted that even his most high-profile family member would be joining any hostility towards him in Las Vegas.

“My brother said that tonight, when everyone’s chanting ‘f*ck Jake Paul’, he’s going to stand up on a chair and orchestrate them like a choir,” said Paul.

The rookie pugilist’s older brother, who was standing next to him, replied: “Yeah, bro. F*ck Jake Paul.”

His fans loved the gesture, applauding that he had reached “a whole new level of trollery” and that he “runs combat sports”.

Even some previous skeptics admitted they had been converted to his camp by the act.

But Paul was predominantly called “cringe” and “like an obsessed ex”, as one viewer remarked: “Imagine spending $100,000 just to get attention from another man.”

Another critic had a reality check for Paul: “You said you won’t be able to fight [McGregor] if he loses to [Poirier], but I think it’s the opposite.

“Why would Conor sink to your level after beating one of the best lightweights in the game?

“If he loses, then he can use you as a punching bag to vent his frustration.”

“Celebrities can obviously do what they want with their money,” began another critic.

“But to spend $100,000 on this chain ȃ just think about how many people could have been fed, or a house that could have built through [charity], and the list goes on.

“Still a fan of your rise in the ring though,” the critic admitted.

And there’s the rub. For all those that hate Paul, there are plenty more who respect the attention he has brought to combat sports.