The Fund of struggle against corruption (FBK) demanded that the candidate for the post of Russian Prime Minister Mikhail mishustina actually show the commitment of transparency to which he has called into the meeting with the Duma factions. After examining the Declaration of mishustina of income over the last ten years, the FCO found that his wife Vladlena mishustina during this period earned 790 million rubles on what is known.

So, in 2010 the income of Mishustina amounted to 72 million rubles. From 2011 to 2018, she earned, respectively, 61, 73, 149, 160 81, 77, 68 and 48 million rubles. The largest income of 160 million rubles fell on crisis 2014. “And that’s all she managed to do in parallel with raising three children. Beautiful would be the story of the achievements of strong women, but, unfortunately, no invoice on the successful business you’ll find,” writes the founder FBK Alexei Navalny.

On the alleged wife of the future Prime Minister has not registered a single operating legal entity. “Often officials lie about what traces of their family business not because he is associated with the investment, and not with the real sector. But in order to earn a billion on the investment, need to invest a few billion. But such funds in the family mishustina just couldn’t be,” said Navalny.

He suggested that the mysterious successful business of his wife mishustina hiding “fake that masked the usual scheme”. The opposition leader also noted that the Federal tax service, which continues to lead Mishustin, is one of “the most corruption-intensive” departments.

The FCO called on the candidate to head the government to disclose how his wife earned nearly 800 million rubles, and agreed to accept a response in any form, even in the form of the message in the Telegram channel. “It’s a question of basic ethics and respect for the citizens of the country, which Mishustin going to control”, – concluded the Bulk.

The wife of the new Prime Minister of Russia mishustina “earned” almost 800 million rubles. On a mysterious business. 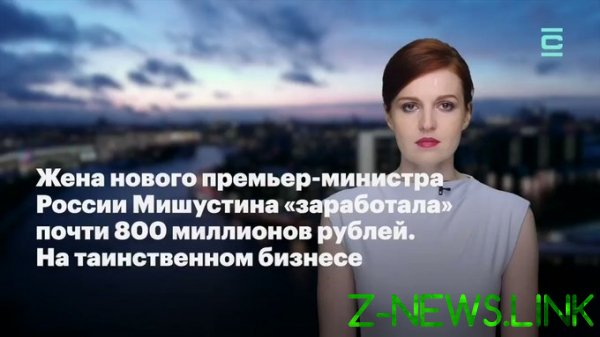 381 people are talking about this

It is unclear why Bulk unhappy that the wife of the new Prime Minister mishustina, having no business, earned $ 800 million?! Well, think about it — if he even has a wife on an empty place has earned so much money, imagine how much he now earns the whole country!

151 people are talking about this

Earlier edition of “the Project” found that Rosreestr concealed information about the property owners, enjoyed by family mishustina – mansion in the elite village of Nikolina Gora and the apartment on Trekhgorny shaft. If earlier the country house was recorded on mishustina and his wife, now in the statement of Federal registration service the names of the two owners of the site are not known – instead, they own real estate “Russian Federation”. Part ownership of two “Russian Federation”, according to rosreestra, and was handed over apartment mishustina. Presumably now the whole property formally owned by adult children mishustina, the property which by law is not necessary to specify in the Declaration.