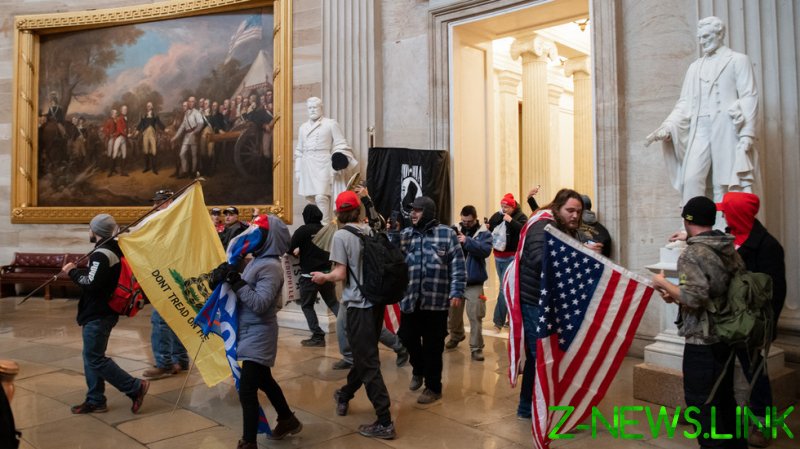 On June 21, NBC News reported on a recent court filing that raises further questions about whether the US Federal Bureau of Investigation (FBI) foresaw what happened in Washington DC on January 6 and, if so, why the agency failed to sound the alarm in good time.

The document in question is an FBI investigative report on social media activity prior to that fateful day, produced in February, showing that enraged Donald Trump supporters were openly talking about bringing firearms to the Capitol in order to instigate a “revolution.” The offending posts were used as justification to launch a probe into protest attendee Thomas Webster, a former New York Police Department officer, who was indicted the following month for attacking a Capitol Police officer.

“A review of open source and social media posts leading up to and during the event indicates that individuals participating on the ‘Stop the Steal’ rally were angered about the results of the 2020 presidential election and felt that Joseph Biden had unlawfully been declared President-Elect,” the report stated. “Users in multiple online groups and platforms discussed traveling to the Capitol armed or making plans to start a ‘revolution’ on that day.”

Oddly, Webster himself didn’t feature in those incendiary discussions, and it’s unknown if any other individuals arrested for their role in the riot did. In all, 521 people have been charged as of June 11.

It’s also unknown if the FBI was aware of that social media activity before January 6, although Bureau Director Christopher Wray has consistently dismissed suggestions his agency had reason to believe there was trouble brewing in Washington until all hell had actually broken loose.

For example, on June 15, he told the House Oversight Committee that the FBI “did not have actionable intelligence that indicated hundreds of people were going to breach the Capitol or storm the Capitol.” He went on to assert that Justice Department rules governing the Bureau’s ability to monitor social media meant networks couldn’t be surveilled “just in case” of possible trouble ahead.

In fact, Attorney General guidelines on domestic FBI operations allow the agency to do just that, and there were sound reasons indeed to employ those powers. State capitol buildings have been invaded during several previous protests, with DC’s own overwhelmed at the conclusion of the 2017 Women’s March. Mere days after the riot, too, domestic extremism researchers drew attention to thousands of online postings they’d collated over weeks prior blatantly spelling out attendees’ objectives – including a flyer, widely shared on Facebook and Instagram in December, overtly referring to the protest as “Operation Occupy the Capitol”.

The Bureau would appear to have had strong reason to have predicted, and prepared for, such an eventuality, and an internal Situational Information Report emailed by the FBI’s office in Norfolk, Virginia, to Capitol Police on January 5 – with the subject line “potential criminal activities in the Washington DC area planned for tomorrow” – makes abundantly clear at least some elements within the agency were on high alert in advance.

The document noted individuals had shared maps of the building on social media, discussed prospective gathering points for participants to meet in Kentucky, Massachusetts, Pennsylvania, and South Carolina so they could descend upon Washington in groups, and actively incited violence.

“Be ready to fight. Congress needs to hear glass breaking, doors being kicked in, and blood from their [Black Lives Matter] and Pantifa slave soldiers being spilled. Get violent. Stop calling this a march, or rally, or a protest. Go there ready for war. We get our President or we die. NOTHING else will achieve this goal,” a fiery post from an online thread quoted in the report said.

A Senate review of “security, planning, and response failures” on January 6 criticized the FBI’s use of email to relay the warning, as this method of communication “failed to ensure the intelligence was escalated appropriately,” and “something of this magnitude” should be transmitted by “prompt phone calls” instead.

The FBI and Department of Homeland Security were also admonished for not publishing an intelligence bulletin before the protest as both agencies typically do in advance of major public events, although that was attributed to the pair’s alleged reticence to base intelligence on potentially idle chatter that could be categorized as political speech protected under the First Amendment.

The review’s treatment of the curious delay in deploying the National Guard was even more flaccid. A timeline of events published by the Department of Defense two days later suggests DC Mayor Muriel Bowser asked for “an unspecified number of additional forces” from the US Army Secretariat at 13:34 pm on January 6, just under 40 minutes before rioters first gained entry to the Capitol. For reasons unclear, it took an hour-and-a-half for the Pentagon to acquiesce, and a further 20 minutes for Bowser to receive confirmation her appeal had been greenlit.

More perplexingly still, it wasn’t until 17:02 pm that the Guard finally arrived on the scene, by which time the situation had essentially fizzled out all on its own. Nonetheless, the review dubiously credits this sequence of events to Bowser not making a “direct request” for National Guard help, Army Secretary Ryan McCarthy failing to “appreciate the gravity of the situation” until long after TV news networks had begun broadcasting footage of the scenes unfolding in the Capitol, and “opaque” Capitol Police Board processes having “slowed requests for National Guard support.”

Conversely, the review makes no mention of mainstream media reports in the immediate aftermath of January 6 suggesting that some Capitol Hill staffers were specifically told by supervisors not to attend work that day due to increased risk levels, or the Capitol Police’s failure to employ precautions such as frozen zones and hardened barriers commonly used for major events in the area. This may at least partially account for why the muddled mob gained access to the building quite so easily, and encountered such scant resistance once inside.

Almost six months on, the truth of what happened in the days, weeks, and months leading up to January 6 seems no closer at hand. In fact, it appears further out of reach than ever – not least due to seemingly every new media report or official statement on the case casting doubt on its established narrative.

Quite clearly though, the idea that the riot resulted solely from “intelligence failures” seems increasingly unlikely – leaving many to ask how much more could have been done to prevent it happening, and why it wasn’t.