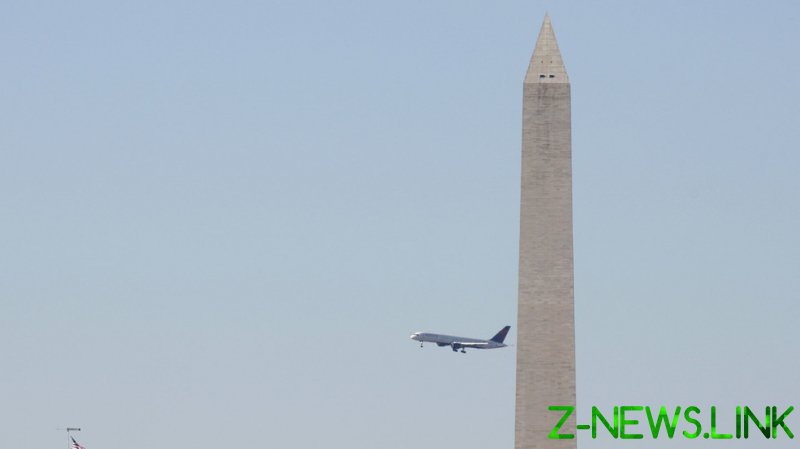 “We are flying a plane into the Capitol Wednesday. Soleimani will be avenged,” the mysterious message said, first received by air traffic controllers based in New York earlier this week, according to CBS News. The message refers to the American drone strike that killed the Iranian Quds Force leader near the Baghdad airport early last year.

The alarming missive came as Congress prepares to count Electoral College votes in the nation’s capital on Wednesday. It is believed the message was designed to suggest an attack during those proceedings.

While it’s yet unclear who was behind the digitized voice recording, officials do not believe the threat is “credible,” CBS reported – though the incident is nonetheless being investigated as a breach of air traffic frequencies. The culprit is thought to be based in the US, with Newsweek noting the Department of Homeland Security (DHS) had narrowed down the broadcast’s origin to a location on New York’s Long Island.

“It is assessed that the technician responsible has radio modifying experience and is transmitting somewhere within [20 nautical miles] of the radio tower in North Sea, NY,” a DHS report said.

The Iranian regime and its proxies would not telegraph plans and intentions relative to an attack. The forecasting of such an event would serve to harm their intentions rather than to instill fear.

The FBI declined to comment on the incident, saying only that it takes “all threats of violence to public safety seriously,” while the Federal Aviation Administration (FAA) said it had reached out to law enforcement. The Pentagon, the DHS and the National Counterterrorism Center (NCTC) have also reportedly been briefed.

The threat was reported just hours after Tehran again called upon international policing agency Interpol to help hold President Donald Trump and 47 US other officials accountable for their role in Soleimani’s death, despite previous requests going unheeded.

The Islamic Republic initially responded to the assassination with a barrage of rockets at military bases housing US troops in Iraq, inflicting traumatic brain injuries on a number of soldiers. However, according to Iraq’s then-Prime Minister Adil Abdul Mahdi, Iranian military leaders tipped off their Iraqi counterparts prior to the counter-attack, apparently hoping to limit the damage done. US officials have since warned repeatedly of further reprisals, pointing to periodic rocket attacks near the US Embassy in Baghdad, though no subsequent strikes have been credibly linked to Tehran.