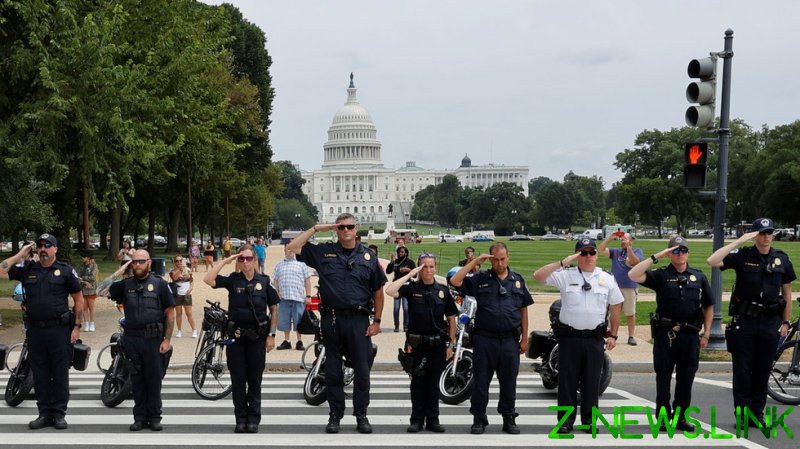 In the first official account of what transpired at the Pentagon Transit Center on Tuesday, the FBI’s Washington Field Office identified the attacker as Austin William Lanz, 27, of Georgia.

Lanz got off a transit bus and “immediately, without provocation, attacked Pentagon Force Protection Agency (PFPA) Officer George Gonzalez with a knife, severely wounding him,” the FBI said on Wednesday.

“A struggle ensued, in which the subject mortally wounded Officer Gonzalez and then shot himself with the officer’s service weapon. Other PFPA officers engaged the subject, who ultimately died at the scene,” the Bureau added, leaving it unclear whether Lanz died of the self-inflicted injury or by the hand of another Pentagon police officer.

“A civilian bystander, who was also injured during the incident, was transported to a hospital with non-life-threatening injuries, and later released,” the FBI said, likewise not specifying what or who caused the injury.

The attack resulted in the Pentagon being put on lockdown for several hours on Tuesday, while the transit station – a major rail and bus hub – was shut down for the rest of the day. Several other metro stations ended up being closed due to the investigation as well, possibly due to initial reports that the suspect escaped on a train, which later proved to be wrong.

In a frustrating press conference later in the day, PFPA chief Woodrow Kusse told reporters only that “gunfire was exchanged” and that “there were several casualties.” He would not even confirm the death of the officer, which was reported by local media after they spotted a motorcade departing the George Washington University Hospital for the coroner’s office.

Gonzalez had joined the PFPA in 2018, having served in the US Army – including in Iraq – and earning the Army Commendation Medal, given for “sustained acts of heroism or meritorious service.” He had also worked for the Federal Bureau of Prisons and the Transportation Security Administration (TSA).

Little is known about Lanz. According to AP, he enlisted in the US Marine Corps in 2012 but was “administratively separated” within a month and never finished basic training, failing to earn the title of Marine.

He had been arrested in Georgia in April, and charged with criminal trespass and burglary. A separate set of charges accused him of assaulting police officers, rioting in jail, and making a terrorist threat. In May, a judge reduced his bail to $30,000 and ordered him to undergo a mental health evaluation.