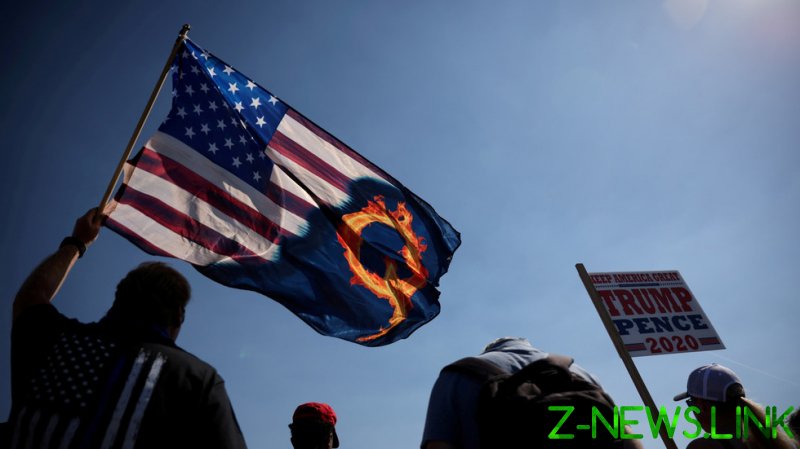 “We assess that some DVE [domestic violent extremist] adherents of QAnon likely will begin to believe they can no longer ‘trust the plan’ referenced in QAnon posts and that they have an obligation to change from serving as ‘digital soldiers’ towards engaging in real world violence—including harming perceived members of the ‘cabal’ such as Democrats and other political opposition—instead of continually awaiting Q’s promised actions which have not occurred,” says the memo, breathlessly reported by CNN and other corporate media outlets as a clear and present danger to the US.

Right below that assessment of likelihood, however, the FBI and DHS say that other QAnon adherents “likely will disengage from the movement or reduce their involvement in the wake of the administration change,” which might be “spurred by the large mainstream social media deplatforming of QAnon content.”

The memo itself leads with the disclaimer that it’s “provided for informational purposes only.” It is dated June 4, and was provided to Congress at the request of Senator Martin Heinrich (D-New Mexico), a member of the Senate Intelligence Committee, according to CNN. An earlier, classified version of the memo was provided to lawmakers in February, according to Heinrich.

This might explain why there are references to mass deplatforming of QAnon – which was going on in the wake of the January 6 riot at the US Capitol – and that the most recent example of “DVE activity” is dated January 8.

One of the examples, dated back to March 2020, was also questioned by an expert. There was “no evidence” that the train derailment in California “was directly linked to QAnon,” said Marc-Andre Argentino of the International Centre for the Study of Radicalisation (ICSR) at King’s College London.

The memo says more than 20 QAnon followers were among those arrested for trespassing at the Capitol on January 6. Over 400 people have been charged in connection with the riot, however. As 25,000 National Guard troops deployed to Washington, DC to secure Joe Biden’s inauguration, mainstream media outlets cited a purported FBI memo warning about militias threatening to storm DC and state capitals. No one showed up on the appointed day, however.

As criticism of the “occupation” in DC grew, the Capitol Police cited another secret intelligence bulletin claiming QAnon, Boogaloo Boys, or some other sovereign citizen militia would try to attack the Capitol on March 4. The House adjourned early citing the threat, while the Senate carried on. Nothing happened.

The Capitol was actually attacked on April 2, but not by QAnon. An African-American man rammed into a barricade, killing one Capitol Police officer and attacking another with a knife before he was shot to death. He claimed to have been a member of Nation of Islam, which disavowed him. The last remaining 2,000 National Guard troops departed the Capitol on May 24.

According to the FBI memo, followers of the QAnon conspiracy theory believe that the US is run by “a corrupt cabal of ‘global elites’ and ‘deep state’ actors run a Satan-worshiping international child sex trafficking ring,” which Donald Trump tried to oppose while president.

Democrats have accused the Republican party of being QAnon believers, but a recent poll suggested that 23% of Republicans – as well as 15% of independent voters and 8% of Democrats – actually found the conspiracy theory plausible.