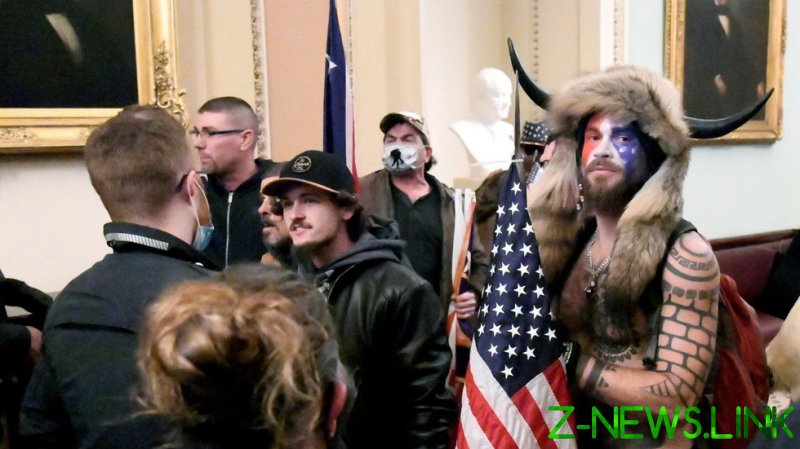 “Family members and peers are often best positioned to witness signs of mobilization to violence,” read a tweet from the FBI on Sunday. To help prevent “homegrown violent extremism,” the agency advises Americans to visit its website, “to learn how to spot suspicious behaviors and report them to the FBI.”

The link provided by the FBI brings visitors to a 2019 document listing “mobilization indicators” that may suggest an individual is preparing to engage in terrorism – for example, “preparing and disseminating a martyrdom video,” “communicating directly with violent extremists online,” and “preparing to travel to fight with or support terrorist groups.”

The indicators and imagery used in the document suggest that its focus was on radical Islamic terrorism, but the FBI, along with the rest of the US security apparatus, has in recent months has turned its surveillance powers on white, conservative America.

Since the pro-Trump riot on Capitol Hill in January, FBI Director Christopher Wray has testified before Congress that the anti-government sentiment responsible for the affray has been “metastasizing” in the US for years, and that “the problem of domestic terrorism … is not going away anytime soon.” Former Assistant Director Frank Figliuzzi was more explicit last month when he called for the arrest of high-level Republicans to “really tackle terrorism, this time domestically.”

President Joe Biden has linked the Capitol mob to “white supremacism,” which he called “the most lethal terrorist threat to our homeland today” during his first speech to Congress in April. Against this supposed “threat,” the Justice Department has asked for new powers of prosecution, and the Department of Homeland Security (DHS) has claimed that right-wingers and conservatives, “inspired by foreign terrorist groups” and “emboldened by the breach of the US Capitol Building,” are “plotting attacks against government facilities” and “threatening violence against critical infrastructure.”

In addition to their own powers, the DHS, FBI, and National Security Council also want to hire third-party ‘researchers’ to spy on Americans, recent reports have claimed.

Though the riot on Capitol Hill was broken up in a matter of hours and Congress returned to work the same evening, the FBI has left no stone unturned in finding and prosecuting hundreds of Trump supporters who took part. Out of more than 500 arrested already, some were turned in by their own family members and co-workers, with those who merely entered the building charged alongside militia members in what prosecutors are terming a “shock and awe” campaign of arrests and charges.

The agency’s latest call for snitches didn’t sit well with some pundits and commenters online, who drew uncomfortable parallels with the totalitarian dystopia of George Orwell’s ‘1984’, and with the real-life surveillance and repression of East Germany’s dreaded Stasi.

Amid the ongoing domestic terror crackdown, questions remain unanswered as to the FBI’s suspected foreknowledge of, and potential involvement in organizing, the Capitol Hill riot.