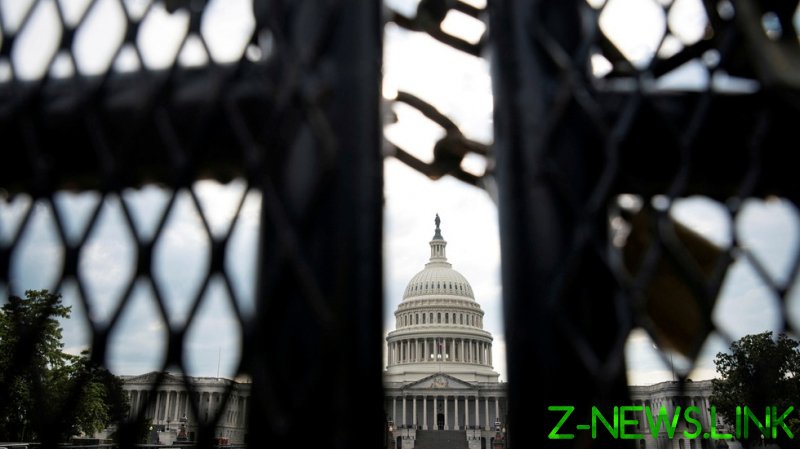 More than 500 people have been arrested for participating in the riot, which saw an unruly mob of former President Donald Trump’s supporters enter the Capitol in January and temporarily disrupt Congress’ certification of Joe Biden’s election win. The riot has been described by political officials and the media as “domestic terrorism,” an “insurrection,” and an “attempted coup.”

FBI Director Christopher Wray even testified before Congress in March that the “siege” was “behavior that we, the FBI, view as domestic terrorism,” and that those responsible were “on the same level with ISIS and homegrown violent extremists.”

Yet multiple FBI sources told Reuters that the agency hasn’t seen much evidence of an organized plot to break into the Capitol.

“Ninety to ninety-five percent of these are one-off cases,” a former senior law enforcement official with knowledge of the investigation told Reuters. “Then you have five percent, maybe, of these militia groups that were more closely organized. But there was no grand scheme with Roger Stone and Alex Jones and all of these people to storm the Capitol and take hostages.”

In the days following January 6, conspiracy theorist Alex Jones and political operative and Trump associate Roger Stone were both names floated by pundits as responsible for organizing the riot. Some rioters were found with zip-tie handcuffs, leading prominent Democrats to claim that a plot to kidnap lawmakers was narrowly averted.

The FBI does believe that some militia groups – namely the Oath Keepers and Proud Boys – planned their entry to the Capitol in advance, but found “no evidence” that they had any plans of what to do once inside, Reuters reported. Conspiracy charges have been filed against 40 of these defendants, but prosecutors have avoided the more serious charges of seditious conspiracy or racketeering – charges that would suggest an anti-government plot by organized criminal groups.

Even the conspiracy charges have proven difficult to stick. At least one Oath Keeper has been granted pretrial release due to a lack of evidence backing up the conspiracy allegation, and his alleged co-conspirators who ended up pleading guilty did so as part of cooperation agreements with prosecutors.

Further muddying the water is the fact that dozens of “unindicted co-conspirators” entered the Capitol alongside the militia members, according to court documents. The fact that these people – some of whom encouraged their fellow suspects to travel to DC for the riot and paid for their accommodation – were not charged with the same crimes suggested to some observers that they were possibly working as FBI sources, informants, or agents.

Despite the FBI’s lack of evidence for an overarching pro-Trump plot, the riot has been used as pretext for a government-wide crackdown on so-called “domestic extremism.” The White House’s latest domestic terrorism strategy promises an extra $100 million for the Department of Homeland Security and Justice Department, and also states that the federal government will work closer with social media companies to combat “extremist content,” and “disinformation and misinformation” – nebulous terms used by many to denote content that counters the establishment narrative.

It also provides funding for all federal agencies to “ensure domestic terrorists are not employed within our military or law enforcement ranks,” wording conservatives and right-wingers say paves the way for their political purging from America’s institutions.