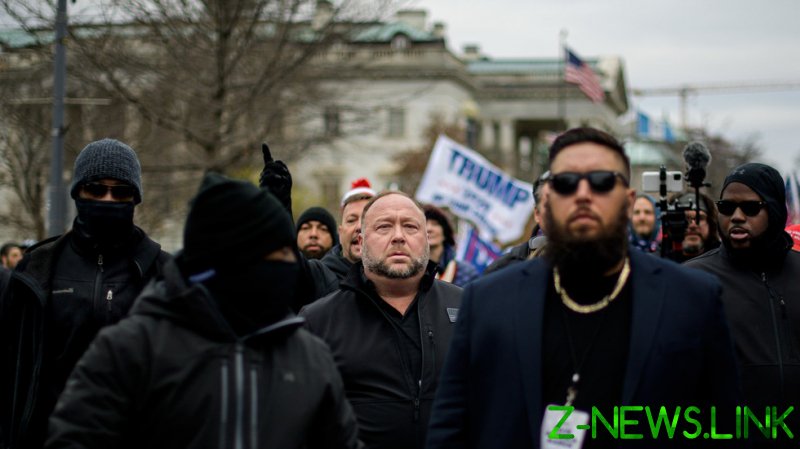 The Department of Justice (DOJ) also is participating in the investigation, which seeks to determine whether there were ties between “high-profile right-wing figures” who promoted former President Donald Trump’s allegations of election fraud and the rioters, the Washington Post reported on Saturday. Like much of the mainstream media’s reporting in the Trump area, the article cited anonymous “people familiar” with the investigation.

Jones, Stone and other Trump allies who may have influenced the rioters won’t necessarily face criminal charges – given the high bar under US law to convict someone of incitement – but the DOJ seeks to gain more understanding of what those who breached the Capitol were thinking. The post said that learning more about how the rioters were influenced “could be critical to showing their intentions at trial.”

But Jones, Stone and Stop the Steal organizer Alexander have argued that they had only peaceful intentions for the election-fraud protest, and none has been shown to have participated in any of the January 6 violence. As Marc Randazza, a lawyer for Jones, told the Post, one need only look at the many videos of Jones at that day’s events to know what his role was.

One clip shows Jones shouting through a megaphone, “We’re here to take our rightful country back peacefully because we’re not globalist Antifa criminals.” As protesters began to clash with police on the west side of the Capitol, he tried to direct the crowd to march to the other side, in front of the Supreme Court building, where Stop the Steal had a protest permit and a stage was set up.

There are “plenty of videos of Alex Jones and Ali urging the crowd to divert away from the US Capitol Building…,” journalist Jack Posobiec said on Saturday. “Pay attention to who leaves this all out.”

John Scott-Railton, a senior researcher at the University of Toronto’s Citizen Lab, argued that Alexander marched to the Capitol alongside Jones and had told followers to “get down to the US Capitol! Orders from POTUS.” He left out the rest of Alexander’s Twitter message, which directed protesters to the Stop the Steal stage on the Supreme Court side of the Capitol.

Scott-Railton tried to explain away Jones’ call for peaceful protest at the Capitol, saying “he seems to have gotten spooked.” He noted that Stone claimed – “on Russian TV, no less” – to have played no role in the riot and accused the former Trump confidant of lying when he said he never left his hotel on January 6. He cited a clip showing Stone in front of his hotel, taking pictures with supporters, as bodyguards watch over him.

The New York Times later reported that six people seen guarding Stone on January 5 and January 6 allegedly entered the Capitol during the riot, though there was no indication that Stone encouraged them to do so.

Several hundred Trump supporters broke into the main Capitol building on January 6, as Congress met to certify the election of Democrat Joe Biden as the next US president. One of the protesters was shot and killed by Capitol Police. Four other deaths – including a Capitol Police officer – were attributed to the riot, leading to Democrats and most mainstream media to characterize it as a deadly “insurrection” and accuse Trump of “inciting” it. They attempted to impeach him for it, even after he left office on January 20, but he was acquitted by the Senate last week.