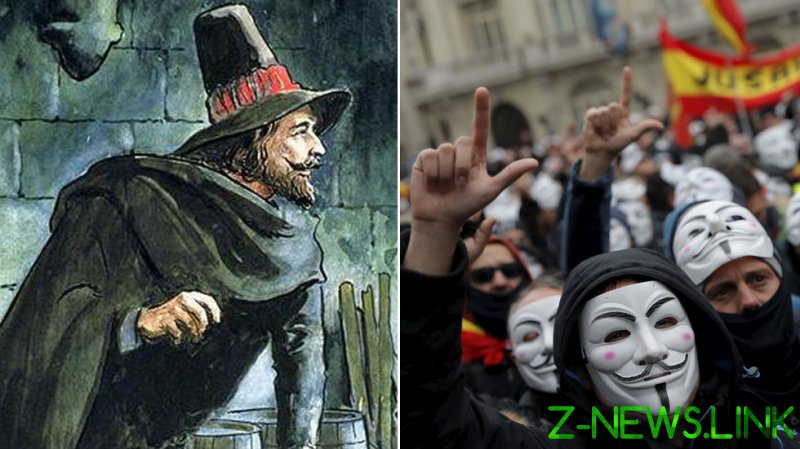 “We don’t have a tradition of masked heroes really anywhere else in the world apart from America,” Moore said in an interview with RT’s Sophie Shevardnadze. “I mean, Guy Fawkes, who the ‘V for Vendetta’ mask is based upon – that wasn’t a mask, that was his face,” he said. Ditto for Robin Hood.

Moore’s graphic novel ‘V for Vendetta’ was arguably his most impactful work for global culture. It follows the endeavors of a nameless anarchist to topple the fascistic government in post-World War III England. The iconic mask of Guy Fawkes he wore in the book was adopted by the hacker collective Anonymous as their symbol.

His other famous works in the medium include superhero works like ‘Captain Britain’ stories, the classical Batman short ‘The Killing Joke’, and his seminal deconstruction of the genre in ‘Watchmen’. Vigilantism under the protection of anonymity is a core trope of the superhero genre, and Moore believes it is as American as apple pie.

One of his interviews in the Brazilian media made waves a few years ago because in it he pointed to D.W. Griffith’s infamous white supermacist propaganda flick ‘Birth of a Nation’ as “the point of origin for all those capes and masks.”

In his interview with RT, Moore said he probably “was in a bad mood about comics” when he made the remark, but stood by his comparison of characters like Daredevil or Batman to the Klansmen riding to quash a black riot in the Griffith movie.

He also mused that, as he was writing ‘V for Vendetta’ in 1981, he didn’t quite imagine how certain world-building elements he used would actually come true. One of the features of the novel’s 1997 dystopian society was all-pervasive government surveillance.

“Imagine my surprise when the Tony Blair Labour government – which was basically a different flavor of Conservative government… came into power in 1997 and immediately rolled out security cameras across the entire country. I wondered whether they had perhaps been enormous ‘V for Vendetta’ fans in their youth,” he joked.

Anonymity is a double-edged sword, Moore said. It makes total sense when people protect their identities from a repressive government when participating in political protests, for example. But it also enables the worst forms of behavior online, like cyberbullying and trolling. It is even used when instigating violent protests, like Anonymous did during the 2011 Arab Spring, he added.

“I think Anonymous doxed the Tunisian government, they released all their documents to the Tunisian people that kicked off the revolution,” he said. “And then Anonymous moved on to Egypt, where they did the same thing. And then they moved on to Syria, where it didn’t really go so well.”

Moore’s current focus is on exploring the nature of human experience. The 2016 book ‘Jerusalem’ was his magnum opus, explaining the ideas of eternalism, a view of reality not as something moving through time from past through present and into the future, but as a simultaneous permanent reality.

“There is a persistent illusion of transience, that the shows that we used to love aren’t on television anymore, you can’t get those sweets that we used to enjoy when we were kids, that lovely building that we walked past every day, they pulled that down, our grandmothers, the people in the past who died, we’ll never see them again,” he explained.

Unlike philosopher Friedrich Nietzsche, Moore is not horrified about the idea. On the contrary, he hopes it can help people to live without the fear of death and become better, since this theory encourages them to take every action with the knowledge that they will have to live with it forever.

He said he sees his art as a vehicle to help people have positive transformative experiences. In that regard, he argued art can be as powerful as psychedelic drugs or magical practices, some of which Moore has tried throughout his life.

“The useful ideas that people might find handy in getting through their lives, that might make it a better society, that surely is the only reason for doing any art,” he said. “Art is a wonderful, mystical, esoteric way of placing your thoughts into somebody else’s mind.”