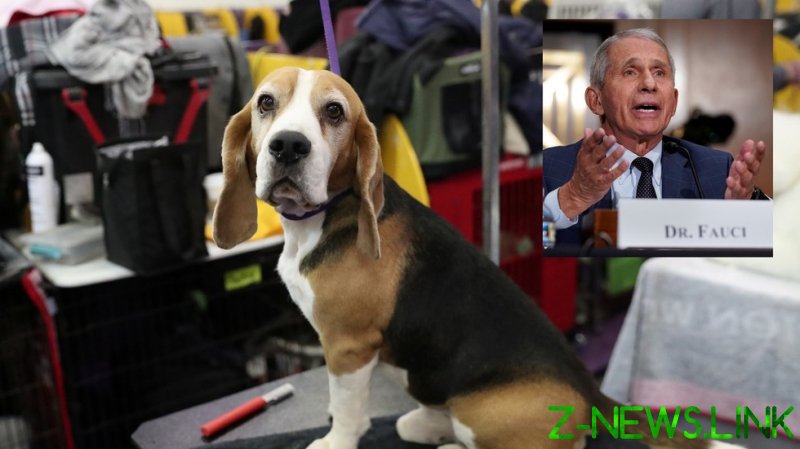 The National Institute of Allergy and Infectious Diseases (NIAID), which Fauci has run since 1984, gave $424,455 to the University of Georgia to inject a group of beagles with experimental vaccines and then infest them with parasites, WCW reported last week, citing documents obtained from the government under a Freedom of Information Act (FOIA) request.

The revelation has since attracted the attention of several conservative-leaning news outlets, including the Daily Caller and the Federalist.

“Fauci’s budget has ballooned to over $6 billion in taxpayer funding annually, at least half of which is being wasted on more questionable animal experimentation like these deadly and unnecessary beagle tests and other maximum pain experiments,” Justin Goodman of White Coat Waste told the Daily Caller. Earlier this year, the WCW documented NIAID’s pain experiments on a variety of animals.

Emails obtained by WCW indicate the study began in November 2020 and is scheduled to end in early 2022. According to the documentation, some 28 beagles would be infected and euthanized after 196 days, for blood collection and analysis. This means the dogs may have already been killed, in June this year.

WCW has published a photo of one infested dog, and a screenshot of an email mentioning how a group of animals was “vocalizing in pain” after being injected with the second dose of the experimental vaccine, the name of which was redacted.

According to the Daily Caller, however, the vaccine is called LFGuard and is intended to treat lymphatic filariasis (also known as elephantiasis), a disease caused by parasitic worms who attack the lymphatic system. It has already been extensively tested on other animals, such as mice, gerbils and rhesus macaques.

Fauci has become a polarizing figure in the US. Democrats have extolled him as the heroic scientist who can do no wrong when it comes to Covid-19, or anything else. Meanwhile, some Republicans have blamed him for the contradictory positions on fighting the coronavirus – as well as funding what they say was gain-of-function research at the Wuhan Institute of Virology in China, that they claim may have produced the virus in the first place.

If one scientist gets his way, however, criticism of Fauci may soon become a federal hate crime. That is the gist of the proposal by Dr. Peter Hotez, a professor of pediatrics and molecular virology at Baylor College of Medicine, published in the journal PLOS Biology.

Hotez accused “a band of ultraconservative members of the US Congress and other public officials with far-right leanings” of “waging organized and seemingly well-coordinated attacks against prominent US biological scientists” – Fauci in particular – and quoted Holocaust survivor and activist Eli Wiesel to argue that “neutrality or silence favors the oppressor.”