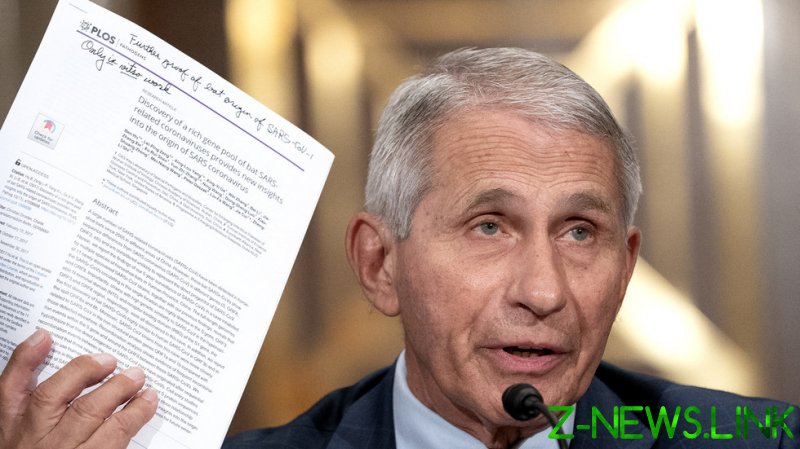 Speaking on Sunday to ABC News, Fauci blasted accusations made by Rand Paul (R-Kentucky) that the National Institutes of Health (NIH) had funded research in Wuhan which resulted in the origination of the coronavirus: “He’s absolutely incorrect. Neither I nor Dr. Francis Collins, the director of the NIH, lied or misled about what we’ve done.”

The senator also called for Fauci to be fired by US President Joe Biden “for lack of judgement,” and said it is unlikely he will “admit that he lied” in an interview with Axios on HBO. “He’s gonna continue to dissemble, and try to work around the truth, and massage the truth,” Paul remarked.

The remarks come after the NIH’s principal deputy director, Lawrence Tabak, revealed last week that nonprofit EcoHealth Alliance did experiment on coronaviruses in China with the organization’s funding, but he denied this had anything to do with the virus that causes Covid-19.

Fauci also reiterated this and said that the viruses being studied “were distant enough molecularly that no matter what you did to them, they could never, ever become SARS-CoV-2.” It would be “molecularly impossible,” he insisted.

In a letter sent to Republican lawmakers, Tabak said the experiment found mice infected with one bat coronavirus “became sicker than those” given another type.

Despite there being a 96-97% similarity between SARS-CoV-2 and the RaTG13 and BANAL-52 bat coronaviruses, Tabak insisted “the bat coronaviruses studied under the EcoHealth Alliance grant could not have been the source of … the COVID-19 pandemic.”

The World Health Organization announced a renewed probe to determine the origins of the coronavirus earlier this month. Chinese Foreign Ministry Spokesperson Zhao Lijian promised that Beijing would continue to support and participate in finding out where the virus came from, but said it will “firmly oppose any form of political manipulation.”