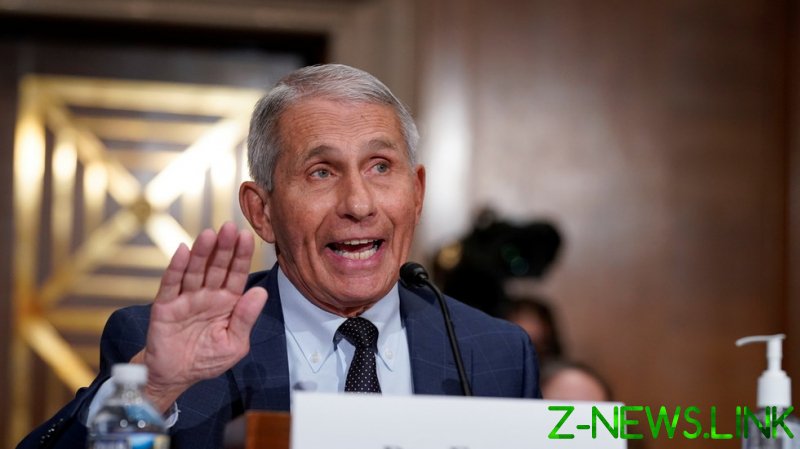 The controversial US authority on the Covid-19 pandemic reminded Raddatz that it’s important for Americans to get vaccinated against the virus not only for their own safety, but also for that of their families and neighbors. “When you do that, there’s no reason at all why you can’t enjoy the holidays in a family way, the way we’ve traditionally done it all along,” Fauci said.

Left unsaid was what the unjabbed Americans can do for the holidays – not that many were waiting for Fauci’s guidance on their party planning, judging by the reactions. Social media users blasted and mocked the notion that citizens of the so-called “land of the free” need the government’s permission to hold family Christmas and Thanksgiving gatherings. “I’m going to have a garden gnome in our yard this Christmas that looks just like Anthony Fauci but will have 10 times more intellectual capacity,” author Tony Shaffer said on Twitter.

Just a week ago, Fauci said in a CBS News interview that it was “just too soon to tell” if Americans can gather with their families on Christmas. Ironically, he told CNN the same day that it was acceptable to take children trick-or-treating, even though Halloween comes nearly two months before Christmas.

Online observers suggested that Americans are increasingly tuning Fauci out because of his flip-flopping, wrong projections and alleged dishonesty. “Or I could just ignore the people who have been wrong about everything from the start, have constantly lied about being wrong, played politics with people’s jobs, lives and families, and then dared to give them an ultimatum to get it all back,” author Wyatt Holliday tweeted.

A Rasmussen Reports poll released last week showed that just 41% of Americans have a favorable view of Fauci, down from 54% in May. Most respondents agreed that he had “lost credibility,” Rasmussen said.

Fauci has enjoyed fawning adulation from mainstream media outlets and Democrat politicians during the pandemic, to the point that he was serenaded on his 80th birthday last December by Joe Biden, then president-elect, and future First Lady Jill Biden. The day was proclaimed “Anthony Fauci Day” in the nation’s capital, and his popularity inspired some peculiar merchandising, including a “Saint Anthony Fauci” prayer candle.

But with Fauci coming under increased criticism in recent months – including allegations that he lied to Congress regarding US funding of gain-of-function virus research at China’s Wuhan Institute of Virology – he has apparently lost some fans. A Fauci documentary received an average Rotten Tomatoes rating of 92 percent by reviewers, but an audience score of just 2 percent, blamed on review-bombing by haters and trolls.