Home / WORLD / Fauci DID fund Wuhan virus experiments, but officials insist virus involved ‘could not have been’ cause of Covid-19 pandemic

Fauci DID fund Wuhan virus experiments, but officials insist virus involved ‘could not have been’ cause of Covid-19 pandemic 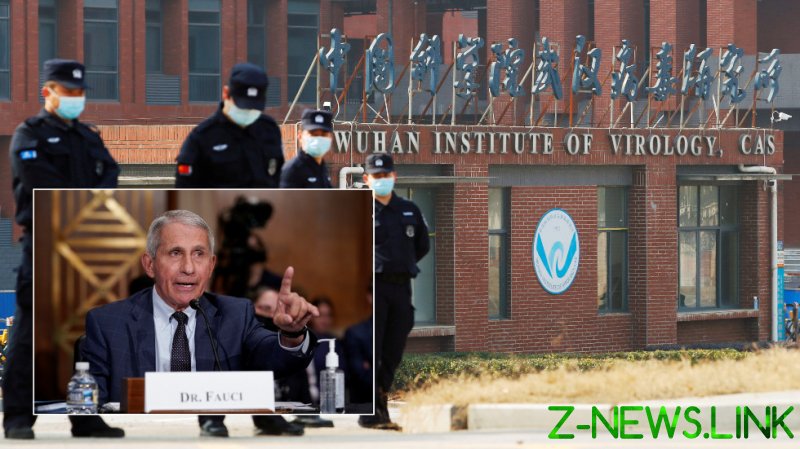 In a letter sent to Republican lawmakers on Wednesday, NIH’s principal deputy director Lawrence Tabak admitted a nonprofit called EcoHealth Alliance did conduct experiments on coronaviruses in China with NIH funding, but denied this had anything to do with the virus that causes Covid-19.

“Regardless, the viruses being studied under this grant were genetically very distant from SARS-CoV-2,” the virus causing Covid-19, Tabak insisted. He attached a genetic analysis of the  virus used in NIH research (WIV-1), along with SARS-CoV-2, the original SARS virus, as well as RaTG13, “one of the closest bat coronavirus relatives to SARS-CoV-2 collected by the Wuhan Institute of Virology,” and BANAL-52, a bat coronavirus recently identified in Laos.

While there is a 96-97% similarity between SARS-CoV-2 and the RaTG13 and BANAL-52 bat coronaviruses, they are “far too divergent” to have been its progenitors, Tabak said, pointing out that humans and chimpanzees have the same degree of genetic similarity.

“The analysis attached confirms that the bat coronaviruses studied under the EcoHealth Alliance grant could not have been the source of SARS-CoV-2 and the COVID-19 pandemic,” he wrote.

Fauci has repeatedly brushed off claims that his National Institute of Allergy and Infectious Diseases (NIAID) or the NIH funded such research, even after being presented with documents showing they gave money to EcoHealth Alliance, which partnered with the Wuhan Institute of Virology to research bat coronaviruses potentially infecting humans.

It was EcoHealth’s boss Peter Daszak who spearheaded the efforts to denounce the “lab leak theory” of the virus origin as a conspiracy, which was then used by social media platforms to censor critics.

Tabak’s letter does not mention the phrase “gain of function” but speaks instead of “research involving enhanced pathogens of pandemic potential (ePPP),” and says the NIH determined it did not fit the definition of such research “because these bat coronaviruses had not been shown to infect humans.”

Critics quickly pointed out that this amounted to word games, however. Senator Rand Paul (R-Kentucky), who repeatedly challenged Fauci on gain-of-function funding, pointed to the letter and said the research involved absolutely fit the definition.

“If the experiment combines unknown viruses and tests their ability to infect and damage humanized cells, of course the result is ‘unknown’ before the experiment,” Paul tweeted. “But it is not ‘unexpected’ that the virus gains in function,” he added, pointing to the mice in the experiment getting sicker.

Dr. Richard Ebright of Rutgers University told the National Review  that the NIH-funded work by EcoHealth Alliance and the Wuhan lab “epitomizes” the definition of gain-of-function research,

“Fauci emphatically denied that money went toward so-called ‘gain of function’ research,” Ebright tweeted on Thursday. “Fauci now has lied to Congress three times on the same subject. Knowingly, willfully, and brazenly. And, so far, with complete impunity.”

Fauci has repeatedly clashed with Paul on the subject, insisting that neither the NIH nor his institute ever worked with the WIV, or that EcoHealth Alliance grants were significant or amounted to gain-of-function research. “You don’t know what you’re talking about,” he told the senator in a heated exchange in July. Paul responded by referring Fauci to the Justice Department for lying to Congress.

The exact origin of SARS-CoV-2 remains a mystery. The Chinese government has emphatically rejected the possibility it may have leaked from the WIV lab, accidentally or on purpose – instead accusing the US of developing the virus as a bioweapon and sending it to China. The letter organized by Daszak last spring insisted it could not have been genetically engineered, but must have evolved naturally in some kind of animal species – offering no evidence of either.