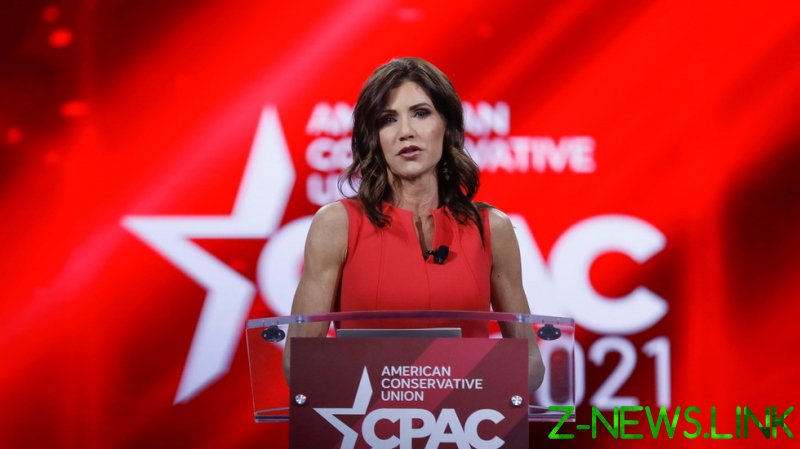 Noem on Saturday took on Fauci’s lockdown advice while making her case at the Conservative Political Action Conference (CPAC) for conservative values and respecting individual liberties.

The comments were met with loud cheers and thunderous applause at CPAC – and scathing mainstream media coverage over the weekend. Fauci was on Sunday brought on CBS News’ “Face the Nation” program to brush off Noem’s comments.

“It’s unfortunate, but it’s not really helpful,” Fauci said. “Sometimes you think things are going well, and just take a look at the numbers. They don’t lie.” He added that “now is not the time to declare victory,” although it’s unclear what he was referring to since Noem hasn’t celebrated beating Covid in her speech.

Interviewing Fauci was Margaret Brennan, who helpfully set up her question about Noem’s attack by saying with incredulity that the governor got a standing ovation Saturday at the CPAC conference in Orlando “when she said she ignored the medical advice of experts and specifically you.”

Noem has too appeared for an interview with Brennan later on “Face the Nation,” responding that she’s never ignored medical advice. The governor said what she did was to take into account input from experts in deciding to tell citizens the truth about Covid-19 risks and give them responsibility for making their own family health decisions.

Fauci has long been held up as a hero by Democrat politicians and mainstream media outlets, which used him to criticize former President Donald Trump, despite the fact that he flip-flopped on Covid-19 recommendations and admitted to purposely deceiving the public about targets for vaccination rates. One of his most loyal allies, CNN, stepped in again to defend Fauci.

“That’s outrageous,” CNN medical analyst Dr. Jonathan Reiner said on Saturday of the standing ovation for Noem. He blamed the Republican governor for the “thousands of people” who have died from Covid-19 (the current South Dakota’s Covid-linked deaths stand at 1,888 people per John Hopkins university), claiming that “her science denialism has resulted in the propagation of that disease unnecessarily throughout her state mercilessly, so I side with Tony Fauci.”

South Dakota has been a target for media attacks because as the only US state that hasn’t ordered any lockdowns or mask mandates during the pandemic, it’s a real-life counterpoint to the states that have crippled their economies or imposed restrictions on personal freedoms to mitigate the spread of Covid-19. Noem has been labeled “ill-informed,”“reckless” and a “denialist.”

Brennan continued on that theme Sunday, suggesting that Noem’s policies were contrary to CDC guidelines and were at least partly to blame for South Dakota having the eighth-highest rate of Covid-19 deaths per capita in the US. Noem replied that CDC recommendations have changed repeatedly, in some cases because of political pressure, and that South Dakota has “followed the science” in a way that also considers the economic and social wellbeing of citizens.

Noem added that South Dakota’s Covid-19 cases peaked earlier than those in other parts of the country, but now are much lower than in many states. She argued that the important question to explore is whether draconian mitigation measures would have helped. “What we’re seeing is that the mandates aren’t necessarily working.”

In fact, New Jersey and New York – Democrat-run states with some of the most stringent Covid-19 policies – have the highest death rates in the nation. New Jersey has a 23 percent higher death rate than South Dakota. New Jersey’s December jobless rate was 7.6 percent, compared with South Dakota’s 3 percent, and the state said the figure would have been far higher if it had counted residents who gave up looking for work.

Nevertheless, Brennan cut off Noem as she was explaining her lockdown-free approach by posing a catch question “how do you justify the death of your constituents?”

Where Brennan and other media outlets left off in vilifying Noem, Fauci fans on social media picked up. Twitter users called the CPAC crowd “repulsive” and “outrageous beyond belief” for its applause of Noem, while others blasted the governor for insulting Fauci and “killing” people. Commenters also labeled Noem “un-American,” a “disgraceful liar” and “vile.”

“Imagine having the highest per-capita deaths of any state and thinking that makes you a great leader,” anti-Republican commentator W.L. Hearns said. Author Keith Devlin called Noem’s comments “science denialism” and said of CPAC: “GOP’s arrogance and the ignorance on full display at their cult fest.”

Ironically, it’s not Noem’s, but New York Governor Andrew Cuomo’s state that long had the highest number of Covid-19 deaths – before recently being overtaken by California – and still has the second-highest rate of deaths per capita. And yet, Cuomo wrote a book on his successes in managing the pandemic crisis and won an Emmy Award for his Covid-19 briefings. He was celebrated for his leadership despite ordering nursing homes to accept people infected with Covid-19, before being accused this month of covering up the state’s high rate of nursing home deaths.

In her CPAC speech, Noem recalled an interview on ABC’s Sunday morning news show last November. Host George Stephanopoulos interviewed Cuomo just before Noem, asking what advice he might give the South Dakota governor on dealing with the pandemic. Reflecting on all that has come to light about Cuomo in recent months and about South Dakota’s comparatively stronger performance, she said, “So who really needed the advice?”