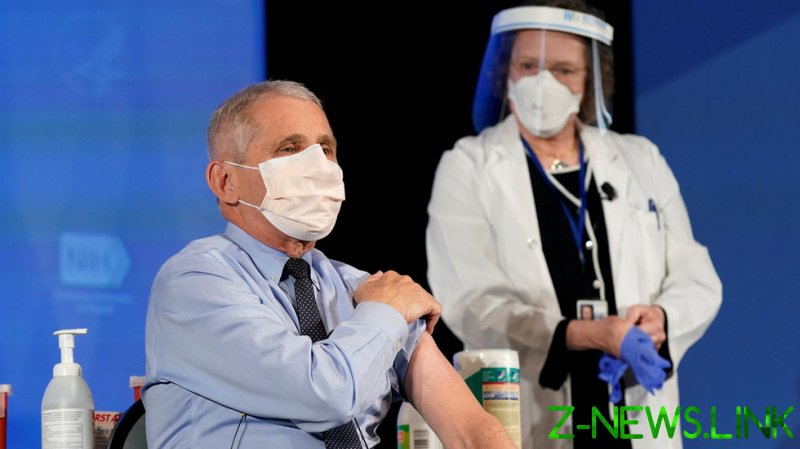 The intentional deception involved estimates for what percentage of the population will need to be immunized to achieve herd immunity against Covid-19 and enable a return to normalcy.

Earlier this year, Fauci said 60-70 percent – a typical range for such a virus – but he moved the goalposts to 70-75 percent in television interviews about a month ago. Last week, he told CNBC that the magic number would be around “75, 80, 85 percent.”

When pressed on the moving target in a New York Times interview, Fauci said he purposely revised his estimates gradually. The newspaper, which posted the article on Thursday, said Fauci changed his answers partly based on “science” and partly on his hunch “that the country is finally ready to hear what he really thinks.”

“When polls said only about half of all Americans would take a vaccine, I was saying herd immunity would take 70 to 75 percent,” Fauci said.

But the doctor’s changing story on herd immunity is only the latest in a series of Covid-19 flip-flops, including 180-degree shifts on such core issues as whether members of the general public should wear masks and whether children should be sent back to school.

Just as his tone on herd immunity changed, his view on prospects for a return to normalcy shifted dramatically. A few days before the November 3 presidential election, he echoed Biden’s gloomy Covid-19 outlook and implied that the Democrat challenger would deal with the crisis more seriously than would President Donald Trump. After the election, he turned far more optimistic.

“This is not the first time that Fauci has admitted to deceiving the public for utilitarian purposes in regard to coronavirus,” journalist Ari Hoffman tweeted. Another observer agreed, pointing out Fauci’s flip-flop on masks. “The fact that people still listen to these experts is the most worrying thing,” he said.

Setting expectations for getting economic activity back to normal is virtually impossible without realistic projections for the vaccination rate that would provide herd immunity. Dr. Moncef Slaoui, chief scientific adviser for the Trump administration’s vaccine rollout, said in late November that “true herd immunity” would take place without about 70 percent of Americans inoculated, which might be achieved by sometime in May 2021.

Fauci’s admitted Covid-19 deception is symptomatic of how government officials “infantilize the American people,” one commenter said. “We’re going to be in trouble when we don’t have Trump to blame everything on and people have to find a way to cope.”

But the doctor remains a superstar in the minds of many Americans, with some Twitter users calling him a “beacon of scientific thinking and enlightenment during these dark ages of ignorance and superstition.”

Radio host John Ziegler offered a theory as to how Trump got the blame for 326,000 US Covid-19 deaths, while following Fauci’s policy advice, while the doctor was elevated by the media as a hero and genius. “Fauci is really loved because it is perceived he took down Trump, not Covid,” Ziegler said.