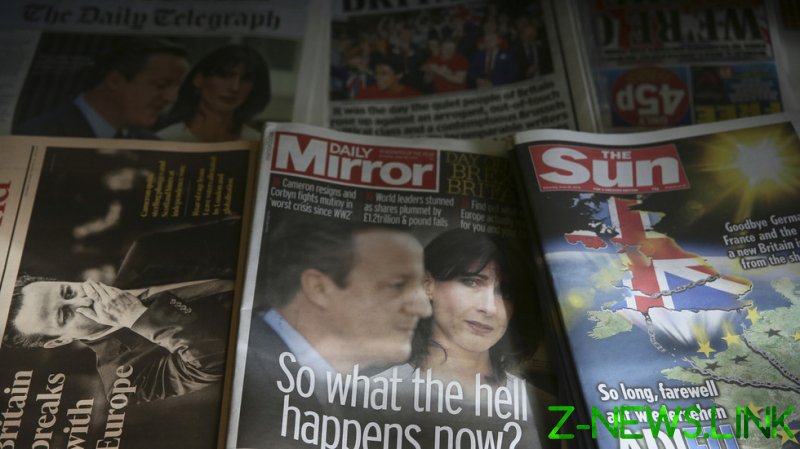 Adios! Au revoir! Auf wiedersehen, pet! That’s it. BoJo got Brexit done, and Britain has finally pulled out. Apparently… (although it would be wise to check the small print on the trade deal before lighting that post-coital cigarette).

It’s a shame, though. The British press will no longer be able to compete in a sport in which they have become truly world class, ‘bash the bureaucrat’.

In its 1990s heyday, Team Britain – captained by a slightly dodgy Daily Telegraph correspondent in Brussels by the name of Boris Johnson – was akin to Pele’s Brazil or Maradona’s Argentina. That BoJo boy could go far.

For those who don’t know this quaint English pastime, let me explain. It goes a bit like this. Thousands of EU officials on the continent spend months, years – their entire working lives, even – micro-focusing on anything from condoms to noisy toys. Nothing is too insignificant to interfere in. These pen pushers then excrete thousands of exceptionally dull words on the subject.

Pity the poor British fishermen, for example. They have long felt bludgeoned by the heavy pens wielded by Brussels bureaucrats. Those hard-grafting toilers upon the sea have been caught in many a storm of EU directives; everything from suggestions they “must” carry at least 200 condoms plus 620 medical items onboard to demands they wear hairnets and minimise “fishy smells.”

Oh, and their catch must then be sold by their Latin names. Melanogrammus aeglefinus and chips, anyone?

All in the name of EU ‘harmony’, you understand.

The job of the EU’s army of bureaucrats, ultimately, is to nudge member states – inch by inch, centimetre by centimetre – ever closer towards their dream of a United States of Europe. A dream that very few people – other than these pen pushers – actually want to see.

A newspaper’s news desk and team of reporters, on the other hand, also have a job – and it’s far more fun. They have to sniff and snuffle out a story within all this heavy, dusty crap. And sometimes they emerge with truly wonderful tales – if not exactly ‘true’ in the strictest sense of the word.

With Britain finally leaving the EU, these stories will, regrettably, die a death. So, to mark the occasion, here’s a dozen of the best ‘bonkers bureaucrat’ tales, and how they register on RT.com’s very own Truth-o-meter…

1: A ban on barmaids’ breasts

The EU wanted to stop barmaids from showing too much cleavage because it was a skin cancer risk when they went out into sunny beer gardens to deliver pints (even though the sun is an extremely rare sight in Britain).

EU rules on optical radiation did not tell barmaids not to show too much cleavage. It was actually a requirement for bosses to assess the risk to skin cancer for employees who work in the sun all day.

2: The Queen’s favourite dog to be banned

EU bureaucrats wanted to outlaw corgis – the breed of dog beloved by Queen Elizabeth II – as well as bulldogs and some spaniels.

A committee of animal protection experts was indeed looking at dog breeds. But it wasn’t actually anything to do with the EU, and the UK did not become a signatory to the voluntary agreement designed to protect household pets.

That gifted young Brussels correspondent Boris Johnson got this ball rolling. “Brussels bureaucrats have shown their legendary attention to detail by rejecting new specifications for condom dimensions,” he wrote.

Size isn’t important. It’s all about quality not quantity. An EU spokesman Willy Hélin said later: “We had had requests from medical institutions across Europe to check on the safety of condoms. That has nothing to do with the size of dicks. All the journalists went on about comparing the size of penises in Germany and France. He (BoJo) was the paramount of exaggeration and distortion and lies. He was a clown – a successful clown.”

New safety rules would banish double decker buses from Britain’s streets because they were presumed to be less safe.

There were moves by various EU bodies to improve bus safety and accessibility for disabled people, and double deckers were thought to be  less safe and less accessible. There were no plans to ban double deckers, though, and the rules only applied to new buses.

5: Fire doors must be fitted if you work from home

Self-employed people working from home must rehang all doors that are not fire resistant to comply with EU workplace regulations.

There wasn’t much to this one at all. Although there are endless rules related to health and safety at work, there was no directive specifying the fitting of fire doors.

6: Cows to be forced to wear nappies

An Alpine farmer covered up his cows’ hindquarters with nappies because their cow pats were too high in nitrates to meet EU fertilizer regulations.

This one was, as a Daily Mail headline aptly put it, ‘udder nonsense’. There is no EU law requiring cows to be fitted with nappies. But there are, of course, multiple rules on nitrates and fertiliser with regard to water pollution.

7: Dead pets’ corpses have to be pressure cooked

Poor Polly the parrot, Fido the dog or Tiddles the cat couldn’t just be buried in the garden in a solemn family ceremony. Oh no. The corpse had to be pressure cooked at 130 degrees Celsius for half an hour first to meet regulations.

There was an animal waste directive for the proper disposal of ‘high risk’ material such as BSE infected cows that could spread disease. But family pets didn’t count.

8: Children’s roundabouts to have speed limits

Kids’ playground roundabouts were to be stopped from spinning faster than five metres per second. Slides couldn’t be too steep, either.

It wasn’t the EU but the European Committee for Standardisation, a non-EU body made up of national standards groups, that set voluntary guidelines for products to improve safety.

9:  Farmers must give toys to pigs

British farmers had to put toys in every pigsty to keep pigs happy, or they would face three months in jail.

Under EU law, pigs had to be given ‘manipulable material’ – such as straw, hay, and compost – to fulfil a behavioural need. They did not have to be given an Action Man or Barbie.

10: Loud noises to be banned

A killjoy EU directive that would set a maximum noise level of 87 decibels would ruin the atmosphere at pubs, clubs and football matches, and prevent the playing of bagpipes. Oh, and bar staff would have to wear ear muffs to protect their hearing.

The proposals were designed to reduce exposure to and impose limits on the amount of noise that workers would have to put up with in their workplace. They would not apply to people attending events or having a pint down the pub.

Children would be banned from blowing up balloons and using other party toys by a new EU directive.

There is a lot of EU toy safety legislation to protect young children. Balloons and other toys placed in the mouth can be a choking hazard to small kids, who must be supervised. But there was no ‘ban’.

Bingo callers were to be banned from using politically incorrect phrases such as “88, two fat ladies” and “legs 11.”

The EU does produce style guides for internal use, but did not outlaw bingo callers from using these particular phrases.