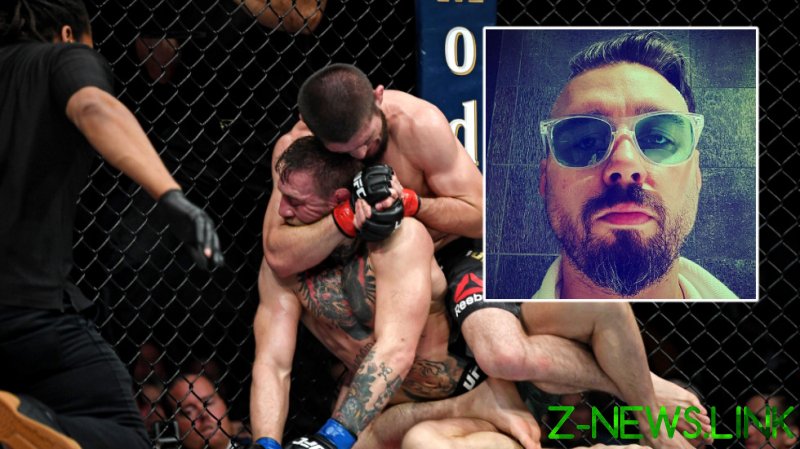 Knocked out by Dustin Poirier in the second round of their clash at UFC 257 in January, the Irishman is at a crossroads in his storied career.

On July 10, he will have the chance to avenge the loss and win his trilogy 2-1 against ‘The Diamond’ in Las Vegas, having beaten him in 2014.

While another defeat would put McGregor to the back of the queue in a stacked division, victory would most likely set up a title clash against the winner of Charles Oliveira vs. Michael Chandler at UFC 262 on Saturday to determine the new owner of the 155lb strap.

Speaking ahead of the event, Hardy claimed that “the only way that this belt cannot be immediately devalued is by having someone win it that’s not lost to Khabib.”

“That’s why we’ve got Oliveira against Chandler – neither of those guys has lost to Khabib,” he explained to Submission Radio.

“So the fans don’t have that picture in their mind of the new lightweight champion getting strangled and dominated by the former retired great.

“If you put that belt over McGregor’s shoulder or Poirier’s waist or [Justin] Gaethje’s waist at this point, everyone sees the same thing; they just see Khabib dominating them and that belt’s not worth as much.”

Retiring on a perfect 29-0 last year to honor his late father, the Russian enjoyed arguably his greatest win against McGregor at UFC 229 as part of the biggest pay-per-view smash of all time.

But it seems that the victor of Chandler vs. Oliveira will pay little mind to Hardy’s comments, and instead seek a ‘Red Panty Night’ with McGregor if he prevails against Poirier.

“I want to see Conor come back,” Chandler told TMZ. “There’s nothing better than when a guy as big as Conor McGregor falls short, loses and then is able to pull himself back up and win. That’s a huge story – it’s a huge storyline.

“But all of it hinges on me having a phenomenal performance on May 15. So we take care of business and then we go there on July 10, enjoy a weekend in Vegas and see who my next opponent is.

“But either way, that’s going to be a good fight and I will be there for sure.”

Nor will McGregor lose any sleep about the Hardy remarks. After all, this week he celebrated topping Forbes’ 10 Highest-Paid Athletes list with earnings of $180 million.

“Baby, we did it,” he wrote, taking to Instagram to celebrate the feat alongside a spot of Gaelic in a caption to photos showing himself and his daughter posing with a cake with a Forbes magazine cover, plus golden balloons marked “#1” and “Proud of You”.

“Thank you, Forbes, for recognizing my role as an entrepreneur,” he said, in a nod to the successful sale of his Proper Twelve whiskey company that earned him top spot.

“It was a dream to lead this list with so many successful athletes. Onwards and upwards we go.”

If his hints are anything to go by, McGregor’s next venture could be trying to own a football giant in the UK.

“A conversation came up regarding Celtic first to be honest, to acquire shares from Dermot Desmond,” he said on Twitter last week.

“I am certainly interested in acquiring a sports team at some stage. Both Celtic and Man United are teams I like for sure. But I am open. I feel I could do big things for a club.“

As revealed through a heartwarming photo posted on social media yesterday, it is the Mancunians that have been close to McGregor’s heart since childhood.

Captioning a photo of himself appearing to be at a party as a youngster, in a fake kit way before his box office blockbuster days, he revealed: “We hadn’t got the money for the real jersey and kit but that was never going to stop me. Up the Red Devils.”