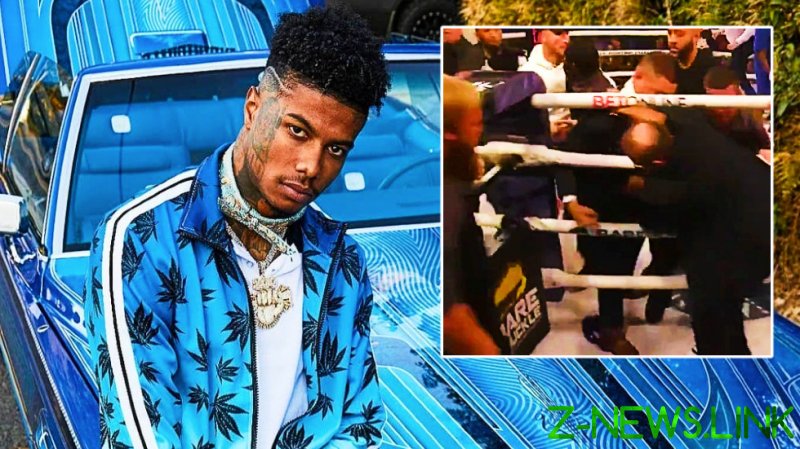 The Los Angeles rapper, who has performed stunts including throwing money at people in impoverished areas out of his car window, appeared to be enjoying his victory in the seconds after his points decision win over TikTok star Kane Trujillo was announced.

That joy soon returned to violence at BKFC 19 in Tampa, where the high-profile pair had met on the undercard of a battle between two fellow influencers in the form of Rachael Ostovich’s win over Paige VanZant.

An unidentified ring invader in a blue hat and glasses initially appeared to be congratulating Blueface on his triumph, only for the scene to turn chaotic after the victor appeared to react to a remark by throwing a shot.

His anger swiftly turned into more punches while security moved in, attempting to prevent the 24-year-old from being able to inflict damage on his target.

“It’s an all-out war,” shouted the shocked commentator, watching entourage members hurdle the ropes and leap into the ring in an attempt to contribute to the fracas.

“A fan jumped in the ring and punched Blueface. Oh my god. We’ve got police officers in here trying to get to the bottom of this.

“Blueface is in the corner calming down right now. It looks like he is protected.”

Blueface’s mood appeared to have brightened after the scrap, when he happily posed with fans, showed off a belt and encouraged the public to support bare-knuckle boxing.

“He said he’d fight me, so I started fighting him,” he grinned when asked by EsNews about the altercation. “You ask, you shall receive an ass-whooping.”