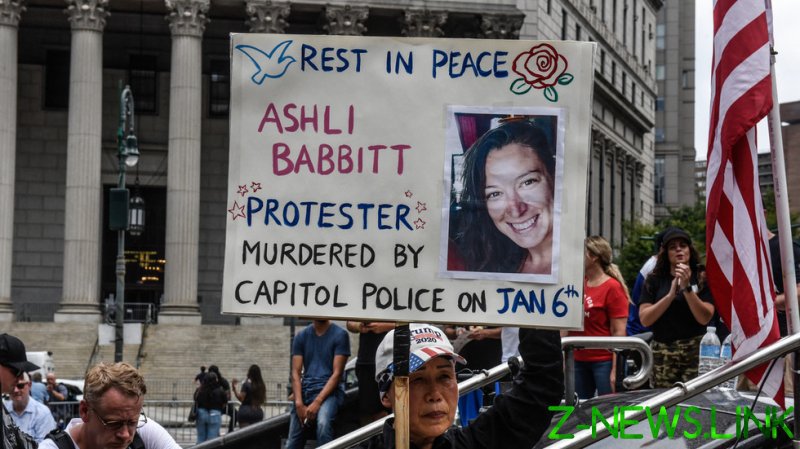 The family of the 35-year-old Trump supporter, the only person to be shot dead during the January 6 riot at the Capitol, has announced plans to file a wrongful-death lawsuit against the Capitol Police, pointing to video footage of the shooting in which the officer in question appears to give no warning before firing the shot.

The US Capitol Police are liable for Babbitt’s death, the lawsuit claims, seeking $10 million in damages. “It’s not debatable. There was no warning,” family attorney Terry Roberts told RealClearInvestigations.

“I would call what he did an ambush,” Roberts told the outlet on Thursday. “I don’t think he’s a good officer. I think he’s reckless,” he continued, pointing out that footage of the shooting shows no reaction from anyone in the vicinity, indicating even those closest to the officer did not hear the warning he supposedly gave.

The lawyer for the plainclothes officer who shot Babbitt insisted his client did warn her away verbally but that his words were muffled because of his face mask.

“He was screaming, ‘Stay back! Stay back! Don’t come in here!’,” attorney Mark Schamel told RealClearInvestigations in February. Schamel called the killing of the unarmed woman “unbelievable heroism.”

Babbitt was shot while trying to climb through a broken window into the House chamber, hit in the shoulder by a 40-caliber bullet from the officer’s gun.

Babbitt’s husband, Aaron, filed a suit against the Capitol Police back in June, demanding it turn over investigation records, including video footage, witness statements, and other documents in order that he might learn the name of the officer who killed his wife. An attempt in April to elicit the name using the Freedom of Information Act was unsuccessful.

Some sources suggest the shooter was Lt. Michael L. Byrd, a 53-year veteran of the force who was serving as the commander of the House Chamber Section of the Capitol Police on that day and is currently on paid administrative leave.

In the aftermath of the January 6 demonstration, the Biden administration quickly seized on the chaos, demonizing Trump supporters still calling for an investigation into what they insisted was a fraudulent election and calling it the worst attack on democracy since the Civil War itself, overlooking notable events such as 9/11 and the attack on Pearl Harbor.

However, the only casualties were among the Trump supporters, almost none of whom were armed, during what Democrats and the media have termed an “insurrection.”

Babbitt was the only victim to have been shot by police, although two other Trump supporters died on the day of natural causes and one of a drugs overdose. Nevertheless, several hundred have been charged on what their defenders have insisted are trumped-up – no pun intended – charges. Four Capitol Police officers have allegedly died by suicide in the months since the riot, and a fifth died of a stroke in the immediate aftermath.

Former president Donald Trump has repeatedly demanded to know who killed Babbitt, leading the media establishment to shift from minimizing her death to posthumously condemning her as a tool of emotional manipulation deployed by “right-wing organizers.” The Washington Post last week published an article noting her support for the “extremist QAnon” theory, and her “denigration” of illegal immigrants on Twitter, before noting she had voted for Barack Obama before Trump.

The Southern Poverty Law Center has even witheringly described her death and ‘martyrdom’ as a nefarious attempt to “flip what happened and present the attackers as victims.”