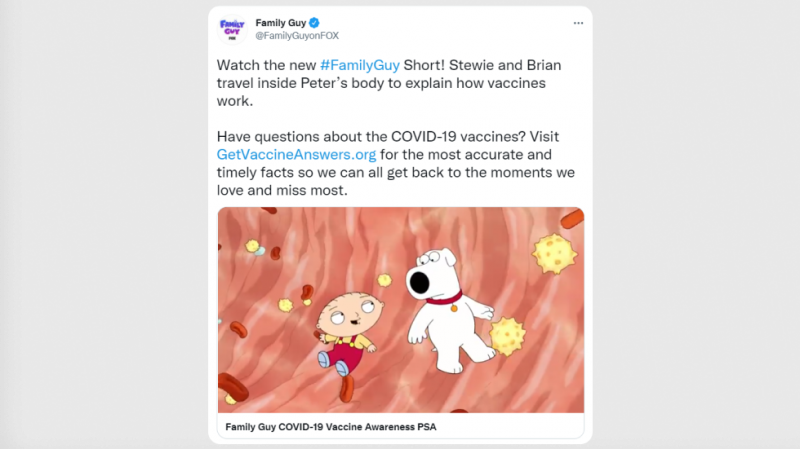 On Tuesday, the animated Fox sitcom released a short clip on its social media pages. The video shows father – and resident dimwit – Peter, sitting on a hospital bed and asking his dog Brian why he should get the Covid-19 vaccine, insisting that he hates getting shots. Brian swiftly corrects Peter’s pronunciation of “Covid,” to which Peter replies, “Well I only ever read it.”

When Dr. Hartman enters the room, Peter asks him “how does a vaccine work?” However, the doctor’s response is less than conventional. “Think of the vaccine as a large ethnic bouncer and Covid-19 as the drunken entitled white kid yelling ‘Do you know my father is?’” the doctor says, before baby Stewie interrupts.

Stewie then enters into a monologue explaining how vaccines have been around for hundreds of years, that they helped eradicate smallpox from the face of the Earth and are well on the way to doing the same for Polio. Brian and Stewie then teleport themselves inside Peter’s body as they proceed to explain exactly how a vaccine works, with Peter’s daughter Meg being used to represent the virus and spike protein.

The talking baby concludes that the vaccine protects both those who receive it and those around them. The video stops short of telling people to get vaccinated. The final shot shows a plaster with the words “It’s up to you,” with links to further vaccine information.

“It’s up to you” is a Covid-19 vaccination initiative from the Ad Council. Lisa Sherman, president and CEO of the Ad Council, said in a statement that the ‘Family Guy’ video was bringing “critical vaccine information to audiences in a fresh and hilarious way that will surely inspire people to take the next step in slowing the pandemic.” She thanked Fox for its cooperation on the issue.

The video has received plenty of praise from people online, with one even going so far to say it is “the smartest and most accurate thing that Fox has released about covid to date!”

Others suggested the video was well pitched. “Well done! Said so adults will understand ( hopefully)” one person wrote on Twitter. Another said it was “funny and informative!”

However, not everyone was so pleased with ‘Family Guy’ and its creator and voice actor Seth MacFarlane. One person questioned why a cartoon writer and voice-over guy thought he was an authority on medicine. “Whether Im provax or not, shut the hell up and stay in your lane, you get paid to entertain, not push your opinions,” one argued.

“I’m vaccinated, I’ve had my shots. But you’ve gone political which is bulls**t,” another chimed in, asking whether ‘Family Guy’ would be advocating giving the mRNA shot to baby Stewie.

MacFarlane has previously been very critical of Fox News and its position on vaccinations, highlighting the controversial views shared by Fox host Tucker Carlson. In August, MacFarlane said he’d like to take ‘Family Guy’ to another network because Fox gives people like Carlson a platform.

MacFarlane jokingly told Jimmy Kimmel on Monday that he “saw everyone else at Fox Corp doing their part to get good science out there” and decided he had to do the same. He suggested the news side of Fox TV lived in an “imaginary fairyland.”

It’s not the first time ‘Family Guy’ has raised this message. In a short PSA released in April, Stewie told his mom Lois to get the Covid-19 vaccine.

On Monday evening, right-wing anchor Carlson claimed the Pentagon’s recent vaccine mandate was actually a ruse to rid the military of “sincere Christians in the ranks, the freethinkers, the men with high testosterone levels and anyone else who does not love Joe Biden.” He contended it amounted to a “takeover of the US military.”