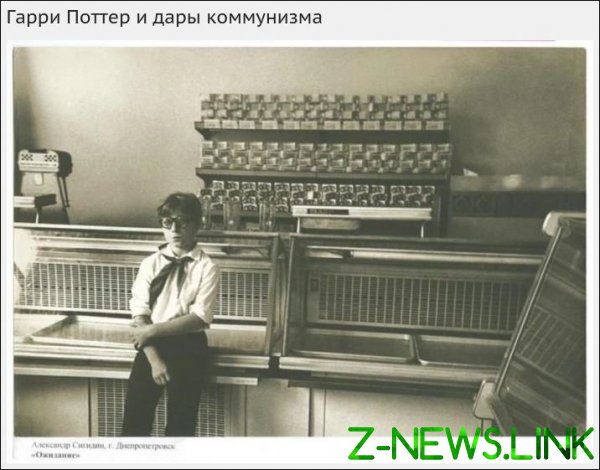 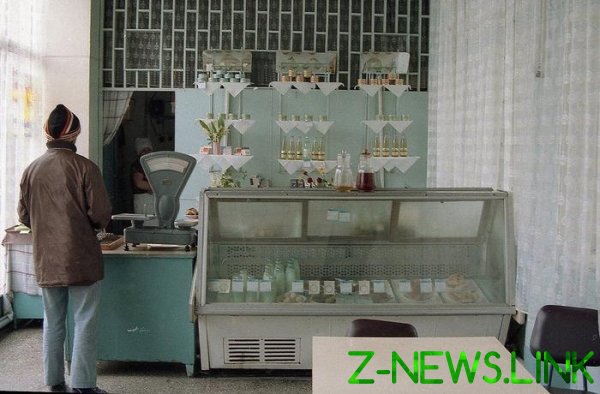 From time to time in the comments to my posts about the Soviet deficit or about how it actually looked like Soviet stores come the fans of the USSR and begin to cry out that they say it’s not true that actually it was quite otherwise, and the shelves burst with abundance. In proof of these statements in the comments fasting is usually a photo from the 1950-ies, is made in some “closed” Metropolitan store for the elite, or one of the staged photo of Soviet stores 1970-80-ies.

Were taken from such staged and essentially false picture of Soviet stores? They were made for photographers of the Soviet press and publishing houses — for example, if you wanted to illustrate some material in the book or in the newspaper a photo of the shelves. In fact, it is such a fake and staged photo issued today, fans of the USSR “real photo Soviet life”.

How to distinguish such false photo from a real store picture? There are several characteristic features — first, on the false picture all the goods very smoothly and neatly arranged, not the slightest trace of what from the shelves of something I took — all is just smooth and beautiful series. Secondly, they often show scarce goods (which under normal operation of the store just sweep). Well, in the third such photos often simply do not have people. Do not! No trade hall or at the box office. Shop is — but not the people) But the funny thing — almost always, even on such a fake photo of Soviet stores, for all their neatness and prilipaniu hard to hide the squalor of Soviet trade and range of goods.

So in today’s post — a story about a fake photo of Soviet stores. Make sure you check out the article below, write in the comments your opinion, well to friends to add do not forget)

02. Here is a typical fake photo of a Soviet store. Neat rows of goods, the correct angle, was removed, likely with a tripod, no people) But even with all the appearance of prosperous snapshot of the striking misery of the range — note the discrepancy between the goods of the navigation panels at the top. In the foreground is marked with the meat Department — and in the fridge instead of meat — some canned food. Why would you put canned food in refrigerator)? On the left labeled “fish” — and there, too, only some canned food, no normal fish store. 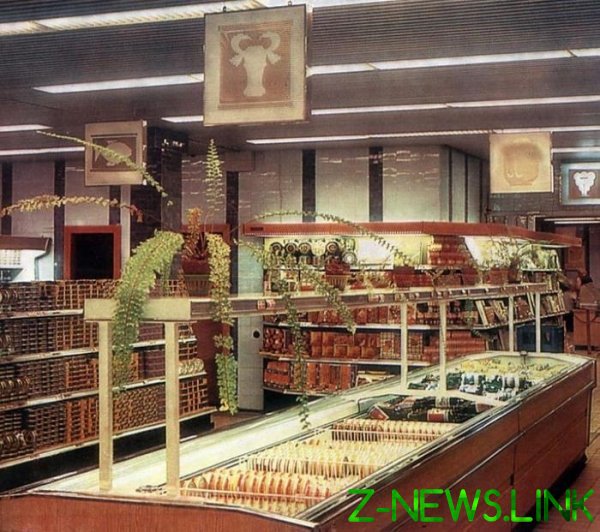 02. Here’s another. Everything seems to be beautiful — the photographer chose the angle, the beautiful lighting, everything. The people there) But here, the Soviet misery makes its way even through the production Department “meat/poultry” are only the rows of cans and boxes with some sort of “cuts” (at best it’s some frozen patties), and in the background in the division “dairy products” are only the dreary ranks of the best in the world Soviet condensed milk. Want yogurt, milk pudding, fruit yogurt, sweet cheese? You figure — will burst the best in the world condensed milk. 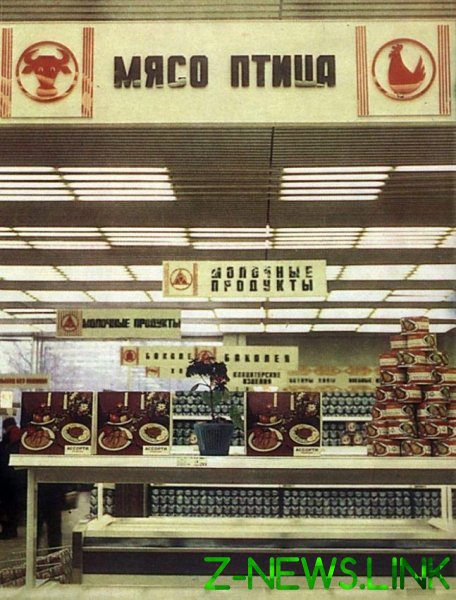 03. Another fake photo of a Soviet store — which, according to the intent of the photographer and the editor of the printed publication was to show the real Soviet abundance — say, in the USSR no one is starving, look! But in fact the frame has got only canned goods — in departments of “bird”, “by-products” etc. you can see only endless rows of jars with some “Breakfast tourist”. The impression that the entire country came in some sort of perpetual campaign for communism) 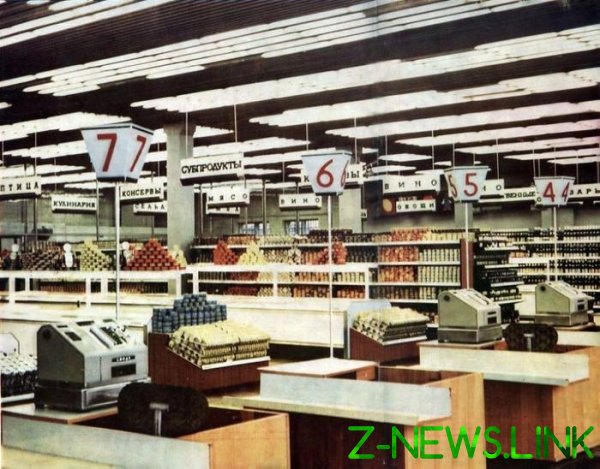 04. Another frame from the same store — the photographer decided to capture, so to speak, the ranks of the products a little larger, it would be better if he didn’t do it) Yes, all arranged neatly and evenly — but look what a poor range. First, considerable on the shelves of the trading floor are some of the canned food, and secondly, even the same canned there are only a few types that are placed slides — spread so to speak the idea of the tree to create the appearance of abundance. In a modern supermarket all available in the frame range of products would fit on one shelf. 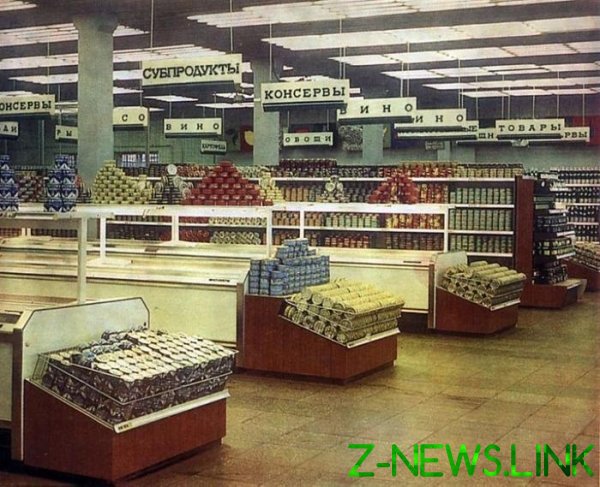 05. That is, according to the lights and navigation — the same store, but filmed with buyers. The frame looks a little livelier, but the range is poor here. 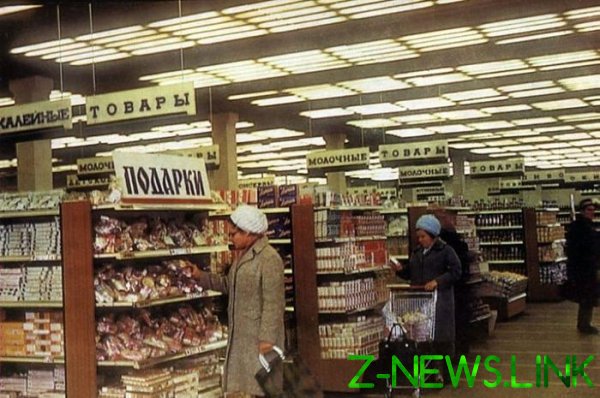 06. So here fotochki. Here the photographer decided to add in the shot of two girls comely appearance, having placed them in the frame according to all the requirements of the composition. As in the last pictures — on the shelves of nothing but canned food. There are still dry baby food in cardboard boxes — I think it was imported (imported) and sold with restrictions. 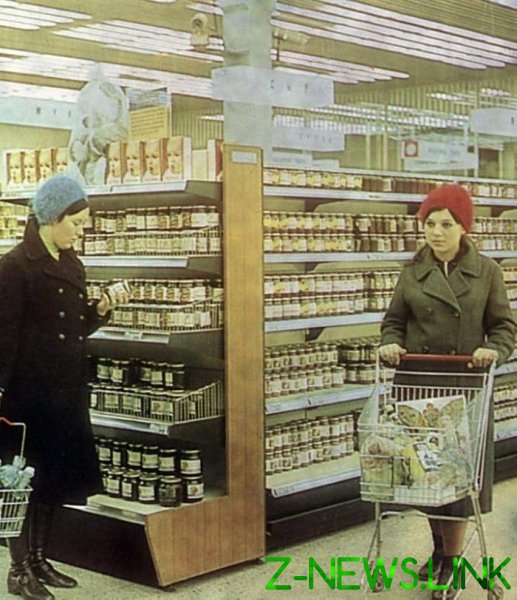 07. A fake photo of the grocery store — probably made in the morning before the opening. The frame seems to be the aisles, but actually in the produce Department you can buy only “underground vegetables” like carrots, potatoes and onions. There are a couple types of cabbage and green onions. Cucumbers, tomatoes, peppers — all in the USSR was deficient. 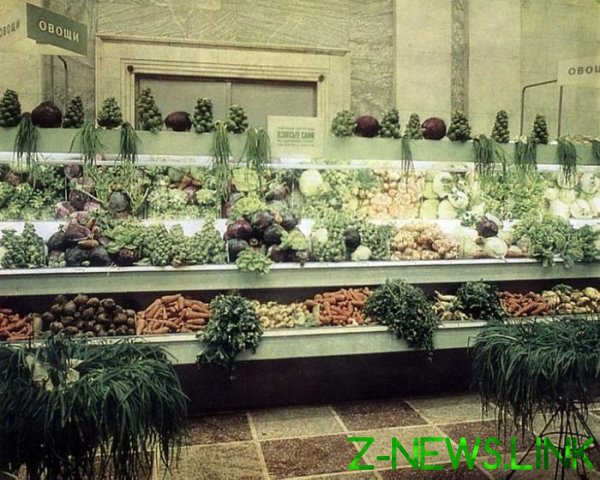 08. Real shovels vegetable, by the way, looked something like this — dirty dented floor, some dirty and dusty ditches with underground vegetables and rotten cabbage. Green onions are proudly a peacock fluff tail and just dumped in a heap. Important detail — even this meager assortment of buyers are not allowed to take himself, all gave the saleswoman. “The bad news who to take, Pushkin?” 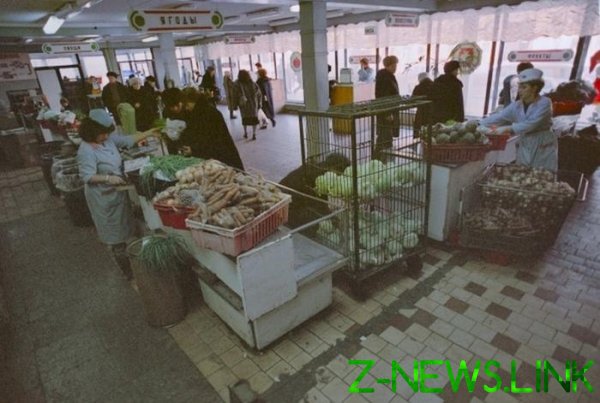 09. Here is another example of fake photos where the main emphasis is placed on buyers. Pay attention to what the poor and poor range around a very long refrigerator in the background is just milk, and all. 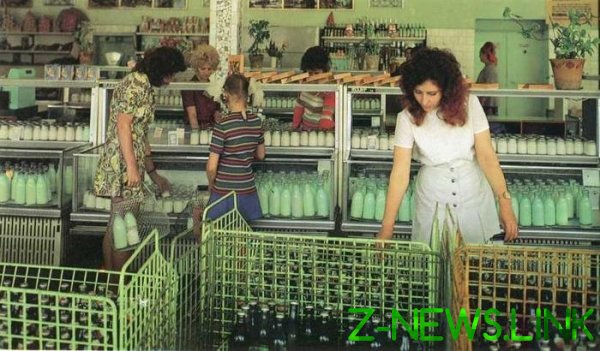 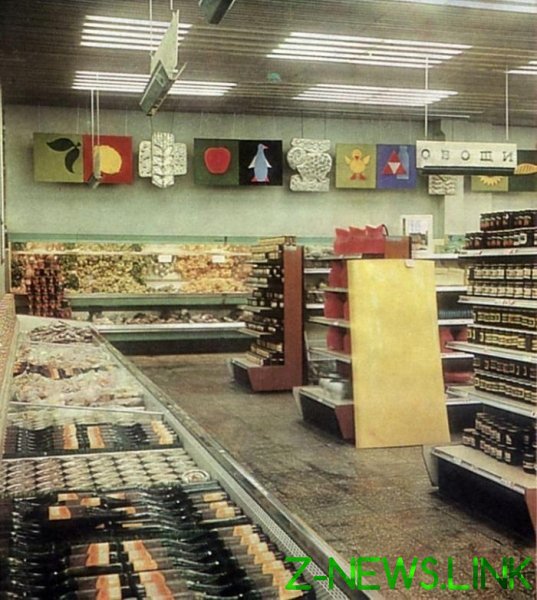 11. Groceries. The whole big end of the rack (by the way, so to speak the top-selling area) is occupied by two (TWO!) kind of a poor tea — tea “Indian 1st grade” (Zelta tutu top), and “Tea Georgian grade 1” (blue bundle with colour oval below). 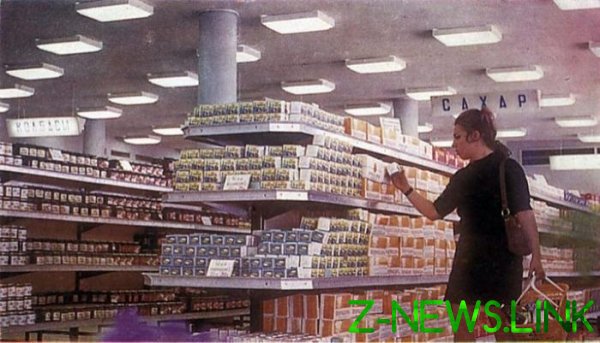 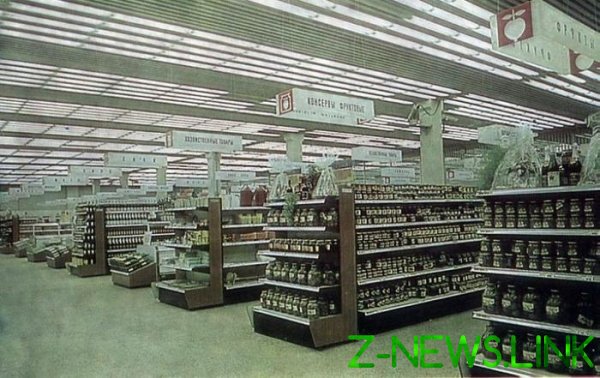 Such cases. In General, as you can see, even a fake and staged photo Soviet magazine looked very shabby. What is most interesting — the then Soviet citizens did not notice the misery of these photos (which was observed in books and in Newspapers) — no one asked why in the frame there are no people, and no one asked — why do we eat canned food?

Many who started in the last Soviet years to leave the Soviet Union — was a culture shock from the Western supermarkets with their fresh fruits and vegetables, dozens of kinds of vyriv and sausages, delicious natural wine, good chocolate and stuff like that. A fake photo of Soviet stores with their meager “abundance” are now perceived as a joke.

And you remember the Soviet stores? They differed from what was published in the photo in the Newspapers? What do think about this?