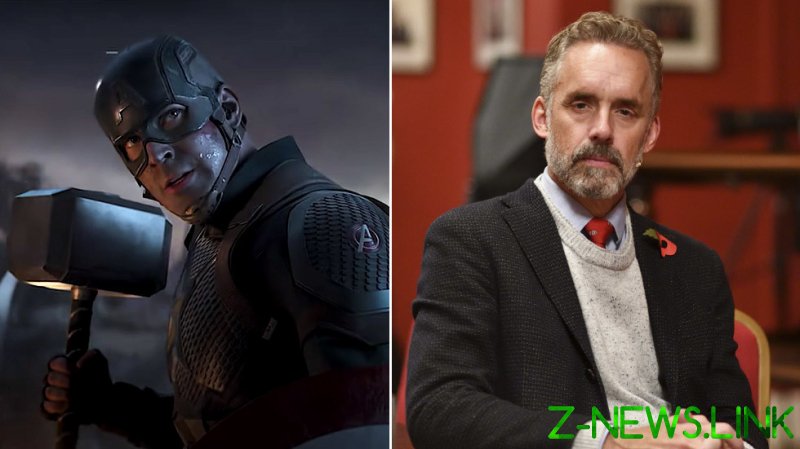 When the character of Captain America was at the height of his popularity in the comic book world, he was best known for punching Nazis in the face and extolling the virtues of patriotism.

Today, however, Captain America is as woke as just about every other character being pushed through the dying comics industry. With more and more agenda-driven writers landing gigs with big wigs like Marvel, his duty has now become to drop the overt patriotism and take on the loosely defined Nazis of today – aka anyone with a slightly conservative perspective.

Enter Jordan Peterson, the controversial author and clinical psychologist who has long been a target of the left for his views on things like shrinking masculinity in modern culture. Peterson was recently shocked to learn a villain in a recent Captain America run was so obviously modeled after him.

Commenting on cancel culture through Twitter, Peterson was shown an image from Captain America that included a version of the villain Red Skull, a Nazi associated with Adolf Hitler in World War II, who perfectly fits the false narrative Peterson’s critics have created around him.

“What the hell?” the author commented in response to an image of Red Skull on a laptop pushing ‘10 Rules for Life,’ an embarrassingly obvious play on Peterson’s bestselling ‘12 Rules for Life.’ The panel came from an issue of Captain America published on March 31 of this year.

In another image shown to Peterson, Captain America becomes a mouthpiece for every social justice warrior out there working overtime to paint anything that goes remotely against their beliefs as pure evil propaganda.

“It’s the same for all of them. Young men. Weak. Looking for purpose. I found the flag, you found the badge. They found the Skull,” the once Nazi-punching hero says. “He tells them what they’ve always longed to hear. That they are secretly great. That the whole world is against them. That if they’re truly men, they’ll fight back.”

The writing should come with little surprise not only because the writer is uber-liberal Ta-Nahisi Coates, who has contributed to publications like The Atlantic, but also because this is unfortunately what passes for art in the modern age. Mainstream outlets are so afraid to anger an invisible mob on social media by doing anything daring that they have replaced storytelling and character with virtue-signaling nonsense that pushes some larger, vague agenda.

“Do I really live in a universe where Ta-Nehisi Coates has written a Captain America comic featuring a parody of my ideas as part of the philosophy of the arch villain Red Skull?” Peterson tweeted in reaction to the panels.

Peterson critics were quick to celebrate the author, noticing the hit he took in the Marvel pages. Notice none actually speak to the virtues of the storytelling presented, but rather just gorge on the fact that the left still has a near-monopoly on mainstream art and uses that to often target conservatives whose opinions they deem dangerous – ever seen one of the million movies and television shows about Donald Trump?

Others who have been more supportive of Peterson in the past rightly called out the degradation of the comics industry and art overall as it becomes infected with obvious political points disguised as storytelling.

The problem of the comic book industry chasing wokeism in the name of digital liberal praise (all while sales pale in comparison to what they once were) is one that really seeps into a lot of mainstream art pushed on the masses today.

Pop on any awards show and most films earning accolades must touch on some trending social issue in a very obvious manner. This is not to say that social issues should not drive artists. They absolutely should. But the nuance and subtlety of asking larger questions has devolved into angry, ignorant blogging that is then loosely translated into a story.

In the case of Peterson, this is why such obvious non-intentional “parody,” as he puts it, should come as no surprise. The idea of Peterson being a bigot is one that ignores the nuance of any opinion he has – one of his most dangerous ones is encouraging young males to… wait for it… clean their rooms every day – so why would art meant to criticize him and those who listen to him be any different?

Comparing the author to literally one of the most famous Nazis in comic book history comes across more as a lame political tweet than some clever hook for a story.

Liberals like Coates hear Peterson criticize the idea of “white privilege” and the decline of masculinity in culture, and they see a raving Nazi because they live in a black and white world, one where you are on one side or the other. No in-between. No grey. This is the thinking that has made political debate today almost meaningless. It’s unfortunate that such thinking has so aggressively injected itself into art, which should be an escape from the fruitless bickering and tribalism seen on social media and cable news, but instead it has just become an unfortunate extension of such nonsense, as Peterson’s bizarre influence on Captain America so clearly shows.