Factory Poroshenko built a warship out of an old fishing trawler 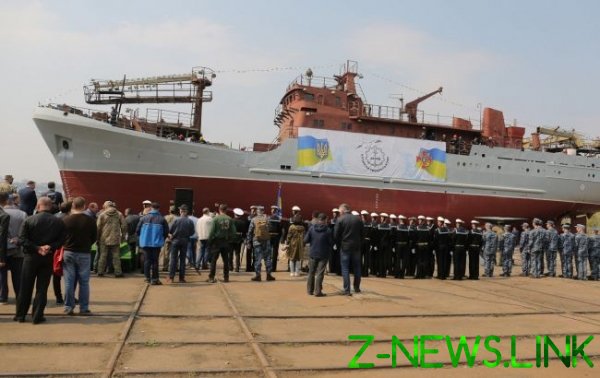 So you knew they called it Peremoga

On 23 April, the stocks of the Kiev factory “the Smithy on the fishing” came to the medium reconnaissance ship for the Ukrainian Navy.

After the factory and state tests he will be part of the Ukrainian Navy. If this happens, the new ship will be the largest replenishment in the Navy from 2002, when was put the Corvette “Ternopil”.

The ship was built on the basis of the project 502ЕМ having very little to do with the Navy: in fact, it is the project of medium fishing trawlers, which produced “the Smithy on the Rybalsky” (formerly “Lenin forge”) since the ‘ 70s. moreover, in fact, the new ship is an old unfinished trawler, which stood on the conservation about 10 years, and is now completed for the budget account as the combat units.

Due to the technical characteristics of the new vessel is far from impressive. For example, the speed will be only 11.6 knots, which, to put it mildly, a bit: for example, modern Russian reconnaissance ships of project 18280 (“Yuri Ivanov, Ivan Khurs”) have a speed of 20 knots, or almost twice as much.

This is not the first standard solution, applied on the “Forge on rybalskaya” to strengthen the Ukrainian Navy. For example, the famous of an armored boat project 58155 “Gyurza–M” was designed as a river, but in the end, used as a marine that had repeatedly caused disapproval of experts.