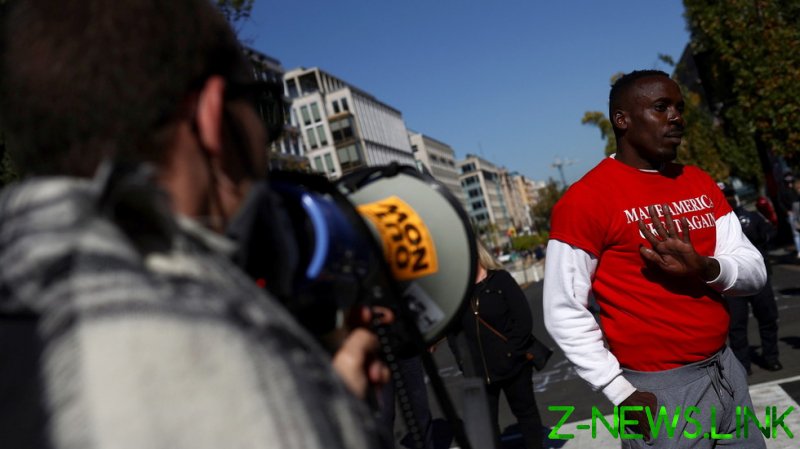 Opining in the Washington Post on Saturday, New York University’s Cristina Beltran invented a new phenomenon, “multiracial whiteness,” to get around the uncomfortable fact that people of various skin colors can have sincere and legitimate political beliefs differing from her own. In Beltran’s book, good whites vote for “multiculturalism,” and bad non-whites adopt the “politics of aggression, exclusion and domination,” as espoused by President Donald Trump. Everybody else votes as conventionally coded by their skin color.

“Multiracial whiteness reflects an understanding of whiteness as a political color and not simply a racial identity – a discriminatory worldview in which feelings of freedom and belonging are produced through the persecution and dehumanization of others,” Beltran wrote.

Such mental gymnastics were made necessary by Trump’s success in getting non-white voters off the Democrat plantation. Even after four years of being painted as a modern-day Hitler by the mainstream media, the 2020 election saw Trump win the most non-white support for a Republican in 60 years. Even among those who stormed the US Capitol on January 6, leftists such as Beltran saw too many non-white faces for comfort.

After all, Democrat politicians and their partners in the media have been busy painting the riot as a “white supremacist uprising.” The story couldn’t be that those voters were authentically angry about allegations that Democrat Joe Biden stole the presidency through election fraud. They had to be white supremacists and neo-Nazis who were trying to disenfranchise the urban black votes that pushed Biden over the top.

In fact, the pro-Trump movement was made so synonymous with white supremacy that politicians such as Representative Alexandria Ocasio-Cortez (D-New York) said they feared that heinous Republicans in Congress would turn them over to the rioters to be murdered.

With a narrative that hysterical – and with an urgent need to permanently crush the populist, anti-globalist movement that brought Trump to power – we couldn’t have people noticing so much non-whiteness in the conservative tent. Persuasive black Republicans, such as Candace Owens, the Blexit leader with 2.5 million Twitter followers, need to be discredited. It’s a lot easier than debating her. And it doesn’t help, when you’re trying to demonize the Proud Boys as white supremacist terrorists, that the group’s chairman, Enrique Tarrio, is Afro-Cuban.

As Beltran notes, “Stop the Steal” organizer Ali Alexander “identifies as” black and Arab. But not to worry, she explains that multiracial whiteness allows non-whites to “engage in the wild freedom of unbridled rage and conspiracy theories.”

“Thinking in terms of multiracial whiteness helps us recognize that much of today’s political rift is a division between those who are drawn to and remain invested in a politics of whiteness and those who seek something better,” Beltran adds.

This is a neat little racist package to comfort the distressed identitarian mind. White equals evil. Non-white equals “something better.” Those non-whites who vote incorrectly are just politically white – i.e., politically evil. Explaining how they took such a horribly wrong turn on the way to fulfilling their correct political destiny would probably require a two-semester course. The good news is that some whites can rise above whiteness and vote for “something better.”

For a professor to say this publicly – and for the Washington Post, supposedly one of our newspapers of record, to publish such bigotry – shows how much American society has degraded. As Biden explained on the campaign trail, if you’re a black person who even needs to question whether you will vote for him come November, “you ain’t black.”

Beltran concludes by saying that the challenge will be to “prevail over the extremism of Trump’s white majority while trying to prevent the politics of whiteness from becoming an increasingly multiracial affair.”

Got it America? After electing and re-electing a black man as president, your bitter whiteness rose up to put a white extremist in office. As CNN’s Van Jones said, it was a “whitelash.”

Like everything else, Trump’s 2016 election victory could only be explained by skin color. And when the skin colors don’t seem to line up with the story line, “multiracial whiteness” is the new woke brain elixir.