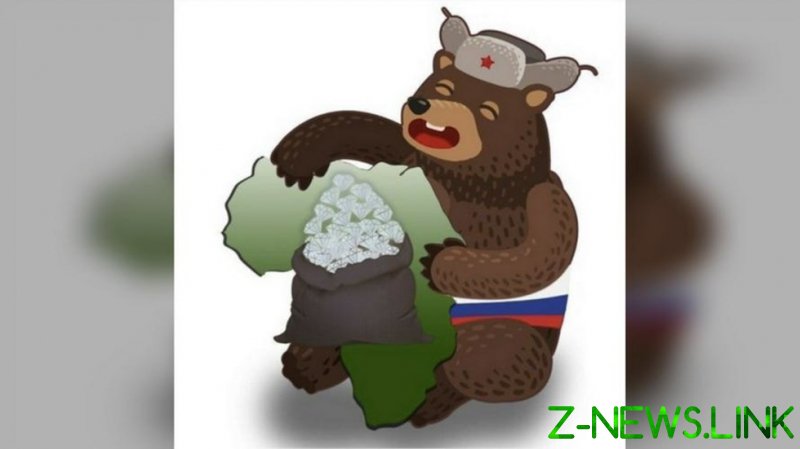 About 5,000 or so accounts followed the banned pages, along with 1,600 accounts in the banned groups and about 200 followers on Instagram, according to Facebook’s head of security policy Nathaniel Gleicher and Global Threat Disruption Lead David Agranovich.

It was reportedly the first time a Western ‘troll’ network has been fingered by the Menlo Park behemoth, which until now focused primarily on politically-driven hunts for ‘Russian’ meddling. The accounts posted primarily in French and Arabic, supported French policies and the military, and criticized alleged Russian “interference” in the Central African Republic (CAR), as well as engaging in flame wars with “Russian” operators.

Examples provided by Facebook were posts denouncing “Russian imperialists [as] a gangrene on Mali!” and warning about “tsarist lobotomy,” or posting crude cartoons of a bear in a fur hat grabbing a bag of African diamonds and calling “Russian mercenaries” the “real thieves and destabilizers.” 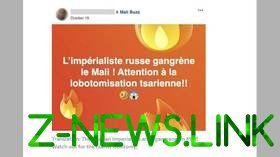 “Beware of tsarist lobotomy!” one of the posts by the alleged French trolls in Africa ©  Facebook/screenshot

Facebook also claimed to have found a ‘Russian’ troll network of 63 accounts, 29 pages, 7 groups and 1 Instagram account, targeting the CAR as well as Madagascar, Cameroon, Equatorial Guinea, Mozambique, South Africa and the CAR diaspora in France. These accounts posted in French English, Portuguese and Arabic “about news and current events,” including the Russian vaccine against Covid-19, supporting the CAR government against the rebel warlords and a “fictitious coup d’etat in Equatorial Guinea.”

While the pages reportedly had about 263,000 followers and the groups 29,000 members, no one followed the sole Instagram account.

Facebook says they found “links to individuals associated with past activity” of the Internet Research Agency (IRA), and “operations we attributed to entities associated with Russian financier Yevgeniy Prigozhin, who was indicted by the US Justice Department.”

The lawsuit against Prigozhin’s company Concord was actually dropped by the DOJ in May, but apparently Facebook didn’t get the memo. Not surprisingly, the company credited “researchers at Graphika” with assistance on the case – meaning the perennial ‘Russian troll’ hunter Ben Nimmo, formerly of the Atlantic Council.

Another ‘Russian troll’ network supposedly targeting Syria, Libya and Sudan was found with the help of “public reporting by the Stanford Internet Observatory.” One of the most prominent SIO researchers is Renee Di Resta, formerly of New Knowledge – a “troll hunter” shop that actually operated a network of false-flag ‘Russian’ accounts itself to influence a US Senate election in 2017.

Gleicher and Agranovich noted that “this was the first time our team found two campaigns — from France and Russia — actively engage with one another,” and claimed that the ‘Russian’ network was trying to rebuild operations after their October 2019 purge, when the “French campaign” shifted focus to “post about Russia’s manipulation campaigns in Africa.”