Facebook’s autocratic Trump ban has tightened big business’s grip on democracy & freedom of expression. We should shudder in fear 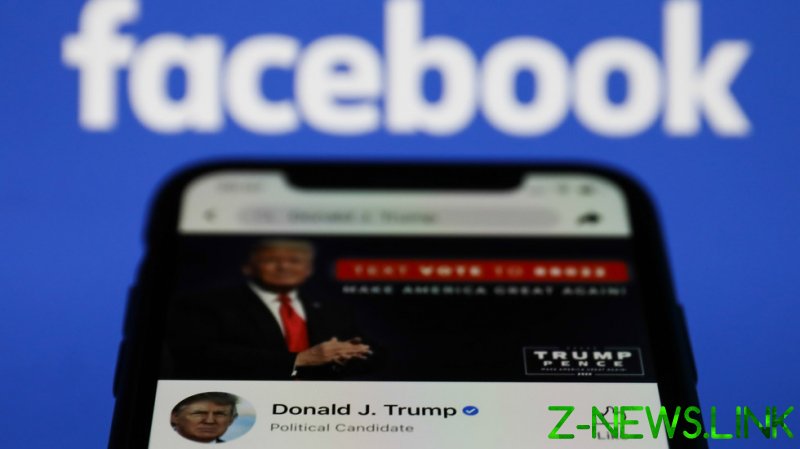 Every democrat in the world should be sitting up and trembling in fear and indignation over the decision taken by Facebook to suspend Trump from the platform until at least January 7, 2023, and the idea that posts by politicians will be subject to more scrutiny by the company’s censors.

Facebook has acted upon the advice of its liberal-leaning ‘Oversight Board’ of academics, human rights lawyers, activists, and others. This august body of 20 chosen experts ruled that the initial indefinite banning of the president after his alleged role in the Capital riot of January 6 was acceptable. But their concern was that it could not be “indefinite,” but should be subject to expert review to assess if there is still a “serious risk… to public safety.”

The Trump ban is terrible enough. But Facebook’s indication that more speech by politicians may be taken down in the future is even worse. For a company that had previously said it would refrain from censoring politicians because their views are essential for the public to see, this shift is fundamental.

Facebook now says that “when we assess content for newsworthiness, we will not treat content posted by politicians any differently from content posted by anyone else.” This might sound fair, even egalitarian, a nod to even-handedness. But it is a fig leaf, and a big lie.

What this means in practice is that Facebook’s unelected executives have now established the company’s legitimacy to intervene and arbitrate in democratic elections. The example of Trump should serve as a clear and present danger. Far from being neutral, Facebook has proven itself to be as arbitrary and self-serving as every autocrat in history has when they have invented random threats to public safety to serve their ends.

We need to be clear here: far from acting neutrally or based upon indisputable evidence, Facebook arbitrarily removed a democratically elected president from a platform used by around 70 percent of adult Americans, effectively cutting him off from what now constitutes America’s public square.

Far from being neutral and contrary to its promise, it did treat content posted by one politician differently from all others. It remains the case, and the public record upholds this, that nothing President Trump said that day constituted incitement to violence as defined in US law. Nothing was stated that was intended and likely to cause imminent lawless action. Nothing came close to this: all Trump did in the two offending posts was repeat his lies about the election being stolen and tell the assembled masses that he loved them while urging them to “go in peace.”

But Facebook didn’t go in ‘peace’. Instead, it took a piece of political action that was staggering in its self-serving partisanship.

What prompted Mark Zuckerberg, Facebook’s CEO, was Facebook’s desire to fend off government regulation, a clamour that has been gathering pace for years. The desire was to demonstrate that the platform could police itself. The action against Trump aimed to display Facebook’s commitment to safety – and was a sop to the incoming Biden administration. Setting up the ‘Oversight Board’ was another. Facebook hoped that by delegating complex decisions about free speech and public safety concerns to impartial experts, the company would show its commitment to the public good, and not just to private profit.

By acting upon the ‘Oversight Board’ ruling, Facebook has accomplished two critical outcomes: first, it has legitimised the board, and the idea that it comprises independent experts worthy of being taken seriously. Its status as an independent body that can rule on fundamental issues like political free speech is now accepted – without any debate, or accountability to anyone except Facebook’s executive Board, and most definitely without any recourse to the electorate.

Second, it has legitimised Facebook as a judge of American democracy. This is not a debate about degrees of control. Any independent body of experts worthy of the name, particularly experts in free speech, would have demanded Facebook reinstate Trump immediately. They would have condemned the company for its censorious actions and demanded regulation that would levy enormous fines against private companies that intervene so decisively in the democratic process.

Instead, we see the further institutionalisation of curbs on democracy and freedom. It is remarkable how little criticism Facebook has received. The reaction to its decision to ‘limit’ Trump’s ban (subject to expert reassessment in two years) has been to welcome the clarification.

The sheer arrogance of Facebook and its kangaroo court are staggering. A company that amasses billions of dollars using its customers’ data – which, incidentally, it was pleased to do with Trump’s 33 million followers before the ban – has now legitimised itself and its self-selected experts to arbitrate over what constitutes safe political debate.

Facebook has set a precedent that autocratic rulers everywhere who have invented ‘threats to public safety’ as an excuse to clamp down on freedom must be looking at with undisguised envy and jealousy. The autocratic cat is truly out of the democratic bag.