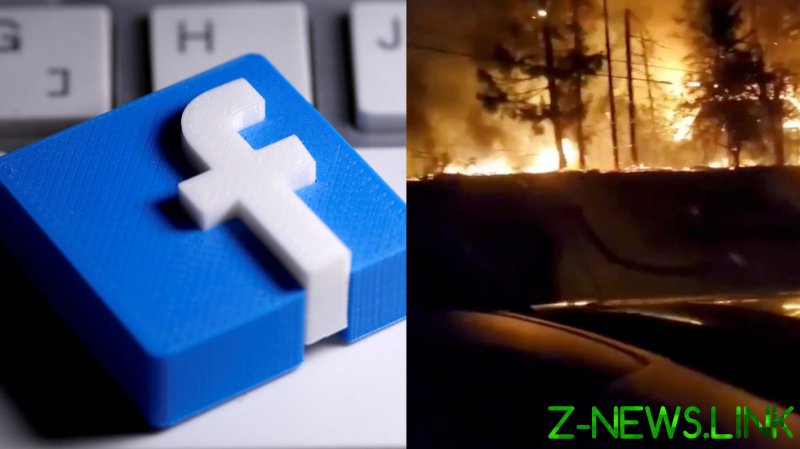 “We are removing false claims that the wildfires in Oregon were started by certain groups,” Andy Stone, policy communications manager at Facebook, tweeted late on Saturday.

Defending what is effectively an act of censorship by the social media giant, Stone noted that speculation suggesting the blazes have been ignited by extremists are forcing law enforcement to “divert resources from fighting the fires and protecting the public.”

The wildfires sparked mass evacuation in the state, forcing more than 40,000 people to flee their homes due to the blaze. As of Saturday, at least 10 people lost their lives in the catastrophe, and dozens are missing.

The fire has already left a trail of destruction, having burned over one million acres across the state, twice as much as the yearly average, the Oregonian reported.

As the fires are being referred to as “historic” in terms of the number of conflagrations and the estimated damage, speculation arose that foul play might be involved, with rumors circulating online that Antifa or BLM activists could be behind the infernos.

On Friday, the FBI sought to shut down those rumors, saying that they had “investigated several such reports” and determined them “to be untrue.” In its message, the FBI urged the public to “help us stop the spread of misinformation.”

While some of the rumors might be lacking any basis, there have been reports stemming from law enforcement itself that several arsonists were nabbed in the area within the past week or so.

On Friday, a man was charged with multiple counts of arson after allegedly igniting a wildfire near Phoenix in southern Oregon. Another man was arrested in central Oregon on Tuesday on suspicion of starting a fire that ravaged some 400 acres of land. There is nothing to suggest, though, that any of these alleged arsons were politically motivated.

Facebook has recently ramped up its crackdown on what it deems disinformation or “fake news,” drawing backlash from critics, arguing that by silencing certain opinions like messages in support of Kenosha shooter Kyle Rittenhouse or alternative takes on the Covid-19 pandemic, it’s acting as a publisher and not as the platform it claims to be.

Last month, the company reported that it removed some seven million posts for “coronavirus misinformation” between March and June.